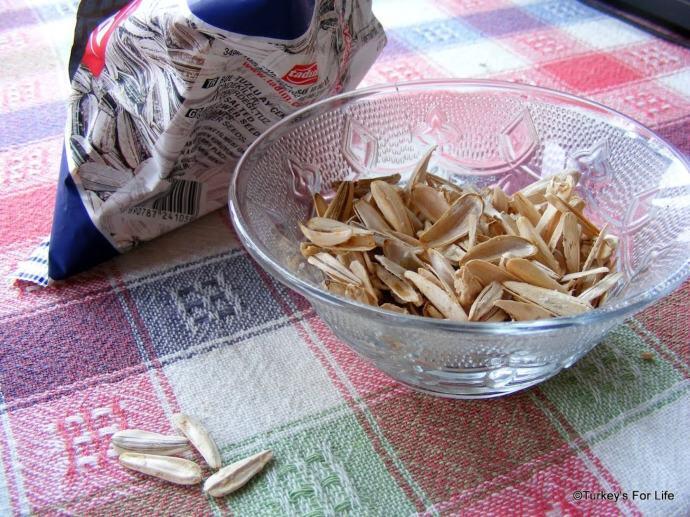 We know sunflower seeds are a part of the diets of many nationalities of the world, but never before have we witnessed sunflower seeds eaten so much – and so quickly – than in Turkey.

It’s not a rarity in Turkey (well, not in Fethiye anyway) to walk past any street or park bench first thing in the morning and see the shells of sunflower seeds scattered all around the immediate area.

Hundreds of them crunching under your feet.

If you walk past these areas in the evening or at night, you will see the cause. It might be a couple of blokes having a chat, a family enjoying the surroundings, a young couple, a group of friends.

Just about anyone who sits down to have a minute.

It seems that people who sit on benches, for whatever reason, like to have a pack of sunflower seeds with them.

If you want to buy sunflower seeds in the Northwest of England, you’ve got to head to the health food section of stores, pay a ‘health food amount of cash’ (too much).

And well, they’re just not the norm.

And then there are the kuru yemiş (dried food) shops which specialise in this type of snack.

These places are everywhere. And sunflower seeds are cheap!

Let us tell you about the phenomenon that is the Turkish sunflower seed.

They are usually coated in salt (the ones we buy, that you can see in the photo are ‘bol tuzlu’ – very covered in salt) and are eaten at a mind boggling rate of SPM (Seeds Per Minute).

If you have never seen a Turkish person eating sunflower seeds, you will be amazed.

Eating sunflower seeds is obviously something that the Turks do from a very early age.

For me, as an adult and a newcomer to this, it’s just not happening.

Your aim is to take the seed between your thumb and forefinger, turn it on its side, start at the thin end.

Then nibble towards the fat end (in two or three gnashes).

At which point, the idea is that the seed has opened and you have the salty flavour in your mouth.

You take the smaller seed out with your tongue. Eat it. Discard the shell and delve straight in for the next one.

All this happens in two or three seconds (we’re not exaggerating!)

All well and good for those with a lifetime of practice.

Personally, I love the salty sunflower seeds but they’re just not worth the effort for me.

Look at the size of the reward! I take the seed from the packet, nibble towards the end, all going well…

And then I can’t get the seed.

I end up sat with the shell between both hands, trying to take it apart to remove the seed with my fingers.

We’re up to about 30 seconds by then.

All for the sake of getting to a little seed, when it’s the taste of the salty shell I prefer anyway.

It almost becomes a battle of wills between me and the seed.

I think to myself, ‘No, not bothering anymore. Not worth it…’

And then when Barry opens a pack (he’s got it sussed), the seeds look at me, challenging me…

‘Go on, you know you want to. Have another go!’

Anyone else got the same issues as I have – or is it just me?