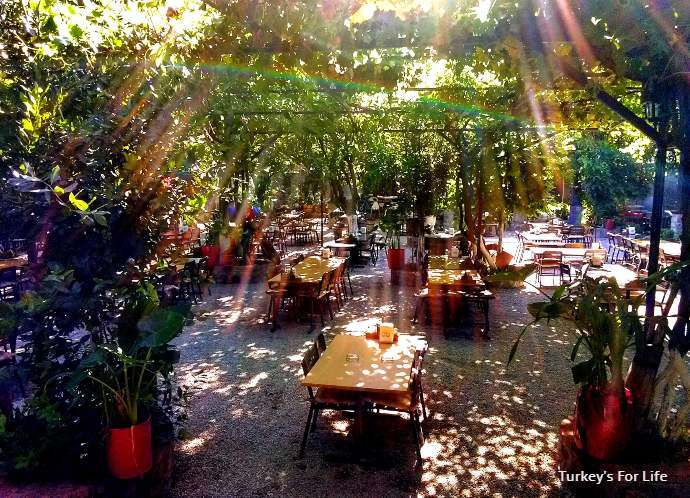 For us, Kayaköy is the home of Kendin Pişir, Kendin Ye ((Cook it yourself, eat it yourself). And Cin Bal Restaurant (pronounced Jin Bal) was the pioneer of this type of al fresco dining.

‘Kendin Pişir, Kendin Ye’ is an idea of genius as far as we’re concerned. And Cin Bal, for us, is the place to go for your barbecue.

A barbecue without the hassle of getting it to light properly. And no cleaning up afterwards.

There are a couple of reasons for our undying love for Cin Bal Restaurant.

The first one is, the guy who opened Cin Bal originally opened a shed of a place, selling raw meat, meze and salads and provided a ready-lit barbecue for you to cook your raw meat on.

The Cin Bal business has been slowly built up, year on year.

Every year, there’s been some form of aesthetic improvement made to the restaurant. There’s never been any need to alter the food!

The second reason is purely sentimental.

When we first came to Fethiye on a package holiday in 1998, we met two fantastic people (who we are still friends with today) and they took us to Kayaköy for the day. And then on to Cin Bal.

I remember walking into this place and thinking, ‘What the hell are we doing here? Please don’t let us be eating here!’

We were ‘eating here’ as it turned out. So I braced myself. It just so happened to be the highlight of our fortnight. And we now go back there on a regular basis.

There are other ‘kendin pişir, kendin ye’ places dotted about around Kayaköy and they’re all good…but there’s always that little biased thing in us.

You must have it yourself about places you love. We go to the other places with friends and go, ‘Yeah, it was great.’

There was nothing wrong with them. But then we add, ‘…it wasn’t Cin Bal though, was it?’

Last week it was Barry’s birthday. The evening was planned; Deep Blue Bar, of course!

In the daytime, we decided to go to Cin Bal for a barbecue. The first time ever that just the two of us had been, we realised.

It’s not important what the temperature is like in the ‘real world’ outside the environs of Cin Bal.

Kaya is high enough above sea level to make it a good few degrees below the searing temperatures in Fethiye.

And, as you can see in the top photo, Cin Bal is completely shaded by vines. You can feel the temperature cool as you enter.

We were the first customers of the day so I had a chance to take some photos of the outdoor area.

All around the edges of Cin Bal are köşk seating areas. It depends on which friends are with us but we generally sit in these areas.

When we first went to Cin Bal in 1998, it was a choice of one of a few Formica tables and chairs dotted around a piece of gravel wasteland.

Now, we can sit and relax on these cushions. Chatting, cooking, eating, drinking, lounging…they’re just comfortable!

When you go to Cin Bal Restaurant, go inside the main building to the fridges to choose your meze and order whatever meat you fancy.

Vegetarians, keep eyes firmly to the right unless you’re curious about looking at meat hanging in fridges.

Meat-atarians, this is good quality meat and a not very common sight in restaurants.

Take all in and appreciate.

We just cannot go to Cin Bal Restaurant and not order lamb tandır (lamb cooked very slowly in the oven).

We usually order half a kilo between four of us. But as there were only two of us last week, we got 300 grams.

Well, it was Barry’s birthday!

When my dad comes out on holiday, he skips the barbecue altogether these days. We go straight in for the tandır with loads of chips.

It’s possible to order a variety of meze and barbecue food from Cin Bal.

For the barbecue, there’s cheese-filled mushrooms, chicken in various shapes and sizes, köfte , kokoreç, liver and the loveliness you can see in the photo; kuzu pirzola (lamb chops).

We ordered three pirzola each.

I remember the groan I used to let out as a kid when my mum said it was lamb chops for tea.

I never saw the point in a big chunky bone with a little knot of meat tagged onto the end.

Well, the Turkish lamb chop is a slightly different cut and has been a revelation for me in that I’ve realised lamb chops are actually fabulously tasty – and meaty!

There is a point to them after all.

But what happens in the cold, wet winter months?

When, all of a sudden, sitting outside to laze about on cushions while the meat cooks over hot coal doesn’t seem so appealing?

Aside from the beautifully juicy and tender lamb tandir and the tempting choice of meze dishes, the whole Cin Bal experience centres around the barbecue.

The owner of the restaurant is obviously fully aware of this.

So, to keep his restaurant appealing year-round, barbecue chimneys have been built at regular intervals along the outer walls of the building.

A couple of brick chimneys in the middle of the room by the central fireplace make for a cosy atmosphere in what could otherwise be a stark room.

If you do go to the restaurant in winter, choose your seating wisely.

Wander in and sit down aimlessly and you could find yourself as main chef for both yourself and your friends for the night.

They who sit near the little arches in the wall are they who will take charge of the barbecue.

Unless, of course, none of you fancy cooking for yourself, in which case, one of the waiters will do it for you (but it’s just not the same if you do that).

As we mentioned earlier, Cin Bal are very proud of their produce and have their hanging meat on full display in a glass fridge for all to see.

This is part of what makes it Cin Bal for us.

But if that’s just not your bag, you might want to choose a seat that doesn’t leave you catching sight of all that meaty loveliness every few minutes.

We don’t need to tell you where it is.

You can’t miss it!