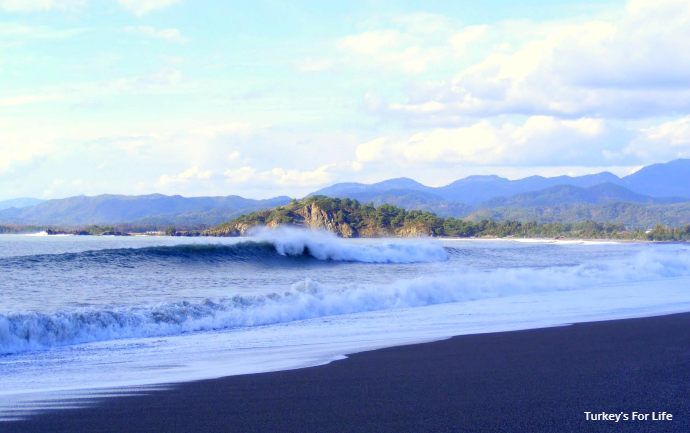 I know there are horrendous storms that affect certain parts of the world on a regular basis and last night’s storm in Fethiye would probably look like a mere gust of wind in comparison to those, but for this area of the Southwest Turkish coast, the storm was pretty significant. Thunder, lightening, high winds and pelting rain battered the house all night (amazingly, we only lost one roof tile) so that when we woke up this morning, we opened the curtains, not just to let the daylight in but to peer through the window to assess the aftermath.

Being a large natural harbour protected by surrounding mountains, Fethiye doesn’t feel the full brunt of the extremes of weather. Tell tale signs of last night’s storm in Fethiye were a swollen sea the colour of clay and these waves crashing against the rocks of Red Island – these waves come from the direction of the open sea. A bit of online communication with a friend in Çalış and we had to go over there to see for ourselves.

We could hear the waves crashing onto the beach as we walked down the street in Çalış but the first effects we noticed of last night’s storm were at the jetty of the Çalış water taxi.

There’s going to be a big clean-up operation going on over the next few days. Some of the bars and restaurants in Çalış have been damaged as the sea was crashing right over the promenade, bringing the beach with it.

As you can see in the photos, the sea at Çalış was still very swollen today. We’ve never seen Çalış look quite like this in all the time we’ve been here. Waves were still reaching the wall between the beach and the hotels and bars but we could see that they were even bigger down towards the dolmuş station – so we continued further along the beach.

The beach and the sea looked absolutely amazing. No pebbles on the beach; just pure, smooth sand. The waves were huge.

These were the waves at Güven’s Restaurant. If you know this place, you can get a good idea of the strength of storm when I say the waves were coming right up, over their seating area, through the garden and hitting the windows. There’s only the steel frame of their covered area left. The rest was blown away.

And as I write, the rain is again pouring from the sky in Fethiye. So far, only the odd grumble of thunder and no high winds. Here’s hoping…