The photo you can see below is minced meat encased in a minced meat and bulgur wheat shell. In Turkey, this delightful little torpedo of tastiness is called İçli Köfte. If you’re familiar with Middle Eastern cuisine, you could well be looking at it and thinking it’s Kibbeh. Whichever name you choose to assign to it, it can’t be any better than the one we knew it as when we first came to Fethiye…the English translation! 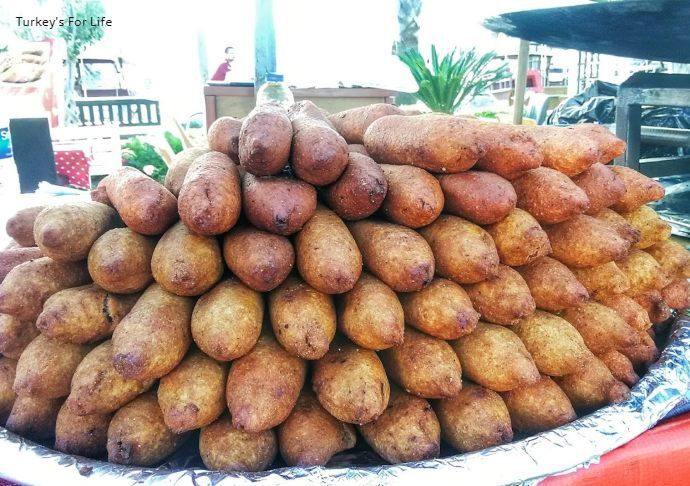 İçli köfte for sale at a street food market

In Fethiye there’s a row of lokantas (canteen/kitchen style eating places) all selling similar Turkish cuisine goodies – including içli köfte. As Fethiye receives many international tourists throughout the year, all eating places make an effort to translate their menus into English and parts of the menu are written on boards and placed on the street outside the restaurant. This means the other restaurants can see what’s being advertised and they write exactly the same thing on their boards and in their menus…

…and so we had a full row of lokantas proudly advertising that tonight’s menu included ‘Sensitive Meatballs.’ For months, we sat in these lokantas, looked at the Turkish – içli köfte – looked at the English – sensitive meatballs – none the wiser. How could a meatball be sensitive? What was a sensitive meatball? The years have passed and the menus – we can’t actually remember what it says anymore but it’s not as good as ‘sensitive meatballs,’ that’s for sure – have changed to a description that gives you a rough idea of what is going to arrive at your table.

I guess the moral of the story is, if you’re dealing with an unfamiliar foreign language, maybe you shouldn’t just open your dictionary and assume all words are suitable for your purpose – especially if this is being launched on your public. In Turkish, ‘Iç’ means ‘inside’ and ‘li’ means ‘containing.’ So içli köfte is a logical name. A case containing an inside. However, ‘içli’ can also be used to describe a person who is within themselves – someone who holds their feelings inside – a sensitive person.

We’ve never looked at içli köfte in the same way since, lest we hurt their feelings. Handle them with care, love them, eat them and enjoy them. They’re good!

Aww, is there a shortage, Sarah? No shortage here if you fancy a visit? :))

wish I could get my hands on some intimate and sensitive meatballs, can't seem to find any around here-haha!

There used to be a few things like this but English translations have improved now. :) Someone's just put some more on the Facebook page I think, Serap.

Haha! That'so funny! Içli köfte is one of my favourite foods, and I've never stopped to consider anyone would translate it so literally!

Wow, thanks for this comment, Eastanbul! You've told us something there. :) I think it's a shame that restaurants don't serve all these dishes. It would be great to have a really good restaurant in this area that specialised in classic Turkish cuisine so people could learn more about it.