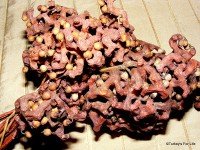 This is another new and mysterious Turkish seasonal food that has just hit our radar. Anyone ever seen it before? When we went to our friends’ house on Christmas Day to eat aşure, this was handed over to take with us. Neither of us had ever seen it before nor had a clue what it was!

Our friend told us that the person he bought it from explained to him that it was hurma. This is where the Turkish language can become a bit confusing as hurma is generally used to mean currents and raisins – but, as we discovered and wrote last year, hurma is also used to describe the super-sweet fruit, persimmon. We’ve all had a taste (it’s the gnarled brown shapes that you eat) and agree that it tastes a bit like a mild-flavoured raisin but with a drier texture.

If anyone knows an alternative name to the hurma in this photo, we’d love to know as we’re very curious about it. Having never seen it before, we also noticed it was for sale on Çalış market on Sunday. It’s serving as a festive decoration in our house at the moment – well, I think there’s something oddly pretty and festive-looking about it.