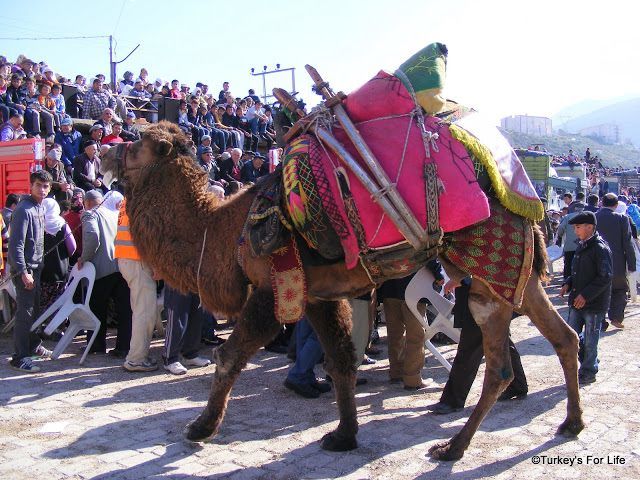 Yesterday, traditions usually associated with the Aegean region of Turkey headed south to the Fethiye region (the village of Karaçulha) and those who chose to attend were treated to a mini camel wrestling festival.

I say ‘mini’ because I’ve seen photos of the size of the crowds attracted by the Selçuk Festival which can apparently reach upwards of 20,000. Yesterday’s festival was in a much smaller enclosure with probably around two to three thousand in attendance.

Not many more could have squeezed in, health and safety went through the window and the celebratory, party atmosphere commenced.

We had no idea what to expect as we paid our entrance fee and slipped between the two lorries acting as the entrance gate. Straight away, our nostrils were filled with the wafting aromas of lokma, döner kebab meat, köfte, kavurma.

But none of these smells beckoned us to where they were coming from. It was too late. The tuna sandwiches we had packed were immediately demoted to ‘we can have those for tea’ and we hit the sucuk stand; the stand that read, ‘Deve ve Dana Sucukları.’ Camel and Beef Sucuk. Yesterday was most certainly in celebration of the camel!

First, a sample. Delightful! Then, long thin slithers of sizzling beef sucuk were pushed to one side and fresh Turkish bread was sliced in half and placed onto the griddle, soaking up the juices from the spicy meat. The sucuk was slapped on the bread and topped with crispy lettuce and onion and chilli flakes. 5 lira’s worth of unhealthy bliss.

Armed with our sandwich, we weaved our way through the crowds, trying to find a good viewing speck. Apart from the ‘V.I.P Area’ (I use the term loosely!) there were no official seating areas and, even more noticeably, no barriers between the crowd and the camels. Time to muse to ourselves, ‘Well, I guess they know what they’re doing.’

We decided to get some height by following the crowds up a set of hastily thrown together wooden steps and onto the flat roof of a building. Musings changed to, ‘Well, we still can’t see and I’m pretty sure this building was not designed for all these people to be sitting on!’

We pushed our way back to ground level and found a decent viewing point and got our first view of the camels parading the enclosure.

These are huge beasts, apparently specially bred. Bigger than any camels we’ve ever seen before. Huge, hairy front legs and necks. If you’ve read or seen Michael Palin’s New Europe, you’ll know that the camels are usually owned by wealthy businessmen and the best camels draw bigger crowds and the most money.

These camels are the race horses of the camel world.

And then a steward came over to our area, ‘Aç. Aç. Aç.’ (Open, open, open). Around 100 people picked up their plastic chairs and we all pushed to the side as the camels were walked out of the ring, right next to us.

The gap quickly closed again and normal positions were resumed. Is this normal? We have no idea but it was certainly interesting. These camels demand your attention.

A few camels remained in the area being walked around, foaming at the mouth, foam bubbles floating off into the sky. These camels are hot-blooded males. It’s rutting season and they’re ready for some action. Other males are obviously rivals for the lady’s affections – hence the ‘wrestling.’

The bouts we saw were very short. The camels walked around and around, commentary blasting over the loud speaker system, village band parading…and nothing really happened for ten minutes or so. And then, all of a sudden, two camels took a dislike to each other.

They meet, necks intertwine and there’s a bit of tussling. Eventually, one is stronger than the other and – as in human wrestling – manages to get its opponent on its knees and neck pinned to the floor. A count of three (or so) and the camels are pulled apart and the crowd applauds.

We actually missed the first bout because we didn’t realise what was going on.

A couple of bouts and a few more encounters with passing camels later, we’d seen what we came to see and really enjoyed the experience.

Apparently, it’s traditionally a man thing, this camel watching business. Well, maybe it’s a sign of the times as yesterday was a family day, complete with fairground for those kids who looked thoroughly bored by the whole camel event.

As dad’s jumped up and down, gleefully shouting, ‘Maşallah! Maşallah!’ towards the camels and having a thoroughly good time, kids looked around nonchalantly, eating lokma and hassling mum to take them to the dodgems. Well, you can’t please everyone!

(Maşallah is difficult to describe. It’s a term of endearment, often used in Turkey towards babies and some animals (it appears camels make the grade). The person saying the word is wishing protection upon the person or animal from Allah.)