In this post, we’re going to be giving you our staple bulgur pilaf recipe; domatesli bulgur pilavı.

In Turkey, there is a type of restaurant called Ocakbaşı.

You go to these restaurants when you want to eat grilled meat, cooked on an open barbecue within the restaurant.

Our favourite meals, whenever we go to places like this, are chicken şiş kebab, lamb şiş or Adana Kebabı.

All of these kebabs are cooked on a skewer which is placed on the ocakbaşı along with vegetables such as red peppers and onion.

Once the kebabs are ready, they’re often served on a bed of lavash bread, with a side salad and bulgur pilavı.

Pilav is a Turkish dish – the Turkish rice side dishes you usually see in Turkish eateries is called şehriyeli pilav – and bulgur pilaf (or ‘bulgur pilavı,’ to give it its Turkish name) is one of our favourites.

We actually both prefer bulgur wheat to rice.

And, if you’ve not got a wheat intolerance, bulgur has a much higher nutritional content, fewer calories, and it’s just as filling. Happy days!

If we’re ever having grilled meats, this easy bulgur pilaf recipe is our staple accompaniment.

Along with rice, bulgur wheat is a bit of a staple in Turkey.

Walk around Fethiye market and you’ll see a number of stalls selling it by the kilo from huge plastic bowls or nylon sacks.

Supermarkets stock it, pre-packed, on their shelves alongside rice, lentils and other dried foods.

But it is not couscous, despite what you might see on menus in tourist areas.

And we’ve used bulgur wheat in the past for other Turkish recipes.

When you make the Turkish bulgur wheat salad, kısır, for example, or lentil köfte, these recipes both use the fine köftelik bulgur.

And when you sample the delights of çiğ köfte, that’s fine bulgur wheat, too.

For our bulgur pilaf recipe, however, we’re using pilavlık bulgur; a larger grain that you might know as coarse bulgur wheat.

This is what you can see in the photo above.

There are lots of little additions you can make to you bulgur pilaf recipe to make so that you can pack it with flavour.

One of our favourite local lokantas in Fethiye uses a stock and they also give their bulgur pilaf a generous sprinkling of dried mint.

Another common bulgur pilaf recipe you will see in restaurants and lokantas is the one we make more than any others – domatesli bulgur pilavı.

This translates as bulgur pilaf with tomatoes.

We love it because, as the bulgur wheat cooks and softens, it takes on the colour of the tomatoes and red pepper paste.

A bit of colour on your plate, a bit of moisture and also sweetness from your added ingredients.

And we often eat leftovers, cold, with yoghurt the day after.

There are lots more dishes we can do, too…

For now, though, enjoy making – and eating – your traditional bulgur wheat pilaf with tomatoes.

How To Cook Bulgur Pilaf With Tomatoes

So let’s get on and make our classic Turkish bulgur pilaf recipe, domatesli bulgur pilavı, so that you can add a little taste of Turkey to your dishes.

The following recipe lists the basic ingredients – but, actually, you can even skip the onion and pepper if you like.

And, as you might have guessed if you read this blog a lot, we’re quite partial to adding a good generous spoonful of chilli flakes.

We sometimes add a pinch of cumin too.

And of course, we don’t usually serve our domatesli bulgur pilavı like this; it’s usually just spooned onto the side of the plate with whatever grilled meats we’re having.

But, as this is a celebration of bulgur wheat, we thought we’d make it look a tad more presentable, like we did with our green beans in olive oil recipe, too.

It’s nice to play with presentation if you have friends round for dinner, too – especially when you’re trying to show off the joys of Turkish cuisine! 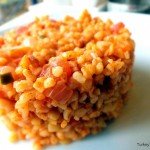 And that’s how you make Turkish bulgur pilaf with tomatoes – domatesli bulgur pilavı.

And if you use vegetable stock or water, this recipe is also suitable for vegetarians and vegans.

Thanks for this fab recipe! I was wondering: if I add dried mint, do I leave out the cumin and chili flakes, or do they go well together in your experience?

Hi Jeremy, thanks a lot for your comment. Turkish cuisine always mixes herbs and spices in this way. we always find they go together well. Domatesli bulgur pilaf is a classic and so tasty. Just be careful not to use too much cumin as it can take over. If anything, mint should come through the most. :)

Does anyone know how many calories there are in bulgar wheat.as it is just too delicious!!?

@ Kim: Hope you enjoyed it. I's really easy to make and we eat it a lot. Your chickpea and roasted red pepper salad sounds lovely. :)

Just made the bulgur wheat and marinaded the chicken to have this eve. I didnt have much veg at home so I've made a roasted red pepper and chickpea salad. I am so excited to serve it to the family tonight! Thanks, easy and yummy looking recipe!

@ Mabiref: That sounds gorgeous. Would like to try that sometime.

@ Steve: Yep,looks very like couscous. As far as I know, couscous is made from semolina. Bulgur is what it is - just wheat. It's fantastic served with grilled or barbecued (even better) meat.