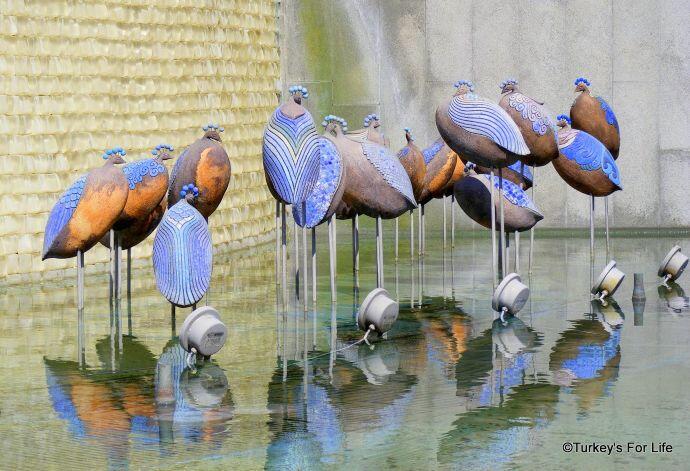 People who go to the Southern Turkish city of Antalya inevitably come away with memories of wandering around and getting lost in the old city of Kaleiçi, passing through the castle walls via Hadrian’s Gate (Üç Kapı) and enjoying views of Antalya harbour from above.

We did all those things and have written about them in previous posts and, while they were all perfectly pleasant ways of passing the time (I’ve been waiting to take photos of these sights for three years), none of them stand out as our favourite memory of Antalya.

When we were in the city four years ago, we were with other friends and maybe you don’t notice your surroundings as much as when you’re alone. All of our memories from that visit were of the sights mentioned above.

We went back to Antalya in March to take part in Runtalya 2011 and to get the photos I really wanted. But we both found ourselves much more interested in the previously unnoticed artwork dotted about all over the city.

Our old memories of Antalya were that, away from areas of historical interest, it was all main roads and apartment blocks.

Well, the main roads and apartment blocks are definitely there but someone, in their wisdom, has commissioned artists to make these areas of the city interesting in their own right.

This time, instead of us walking along the busy roads as quickly as possible just to get from A to B, we found we were constantly stopped in our tracks by random statues and sculptures.

It’s really easy to walk past these little guys without even noticing them but aren’t they great? Each one made me smile. If you’re staying in Kaleiçi and choose to walk to the Archaeological Museum in Antalya instead of taking the tram, keep your eyes open for them as they’re placed all along the tram line on the main road. Each ‘person’ is carrying out a different activity.

Everywhere we walked, we came across statues and sculptures. These two statues are along the sea walls in the city’s Karaalioğlu Park.

There isn’t any information accompanying these works and, although it would be nice to know more about them, it didn’t seem to matter too much. You can make up your own stories about them. I was very intrigued by the lonely soldier on the left.

But the absolute best works we saw were when we going to register for Runatolia. At the time, registration was in the 5M Migros shopping centre. We decided to walk there just so we could get our bearings. We had been walking for about an hour and were trudging along a very busy, wide, noisy ring road. I was regretting opting for the walk and then these lifted the spirits…

We realised we were passing some sort of centre for film studies and these metal sculptures marked the entrance. They were spaced out all along the grass verge and each one depicts the filming of different scenes. We loved it!

Whenever we go another city, we try to look into the public transport. This time, we were in Antalya mainly for the run and getting around to explore wasn’t a priority. If we did have more time, we would have gone off to see other sites and I suspect we would have missed all this understated artwork again. Sometimes, it pays to stick around and explore on foot.