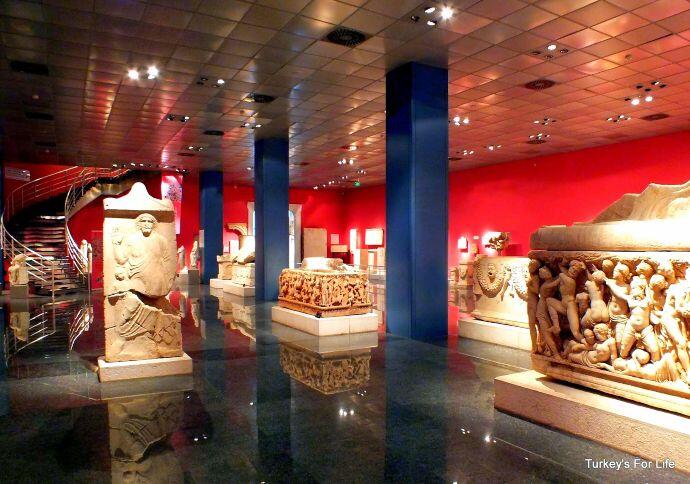 Well, for us, it’s not just the collections they have in the building. We’ve been to Istanbul Archaeological Museum in the past – one of the finest collections in the world, we’re told – and we’ll be honest and tell you we got bored eventually.

That’s a place we need to visit in stages, otherwise it’s a case of stone-head-fatigue.

The displays need to be shown in a way to keep the visitor interested. The information needs to be there – not too little; we want to know what we’re looking at and why it’s significant; but also don’t bombard us with thesis after thesis.

We can read up on those bits another time if we’re that interested.

Fethiye Museum, everyone agrees, is worth a bit of your time while you’re in the area. Well, there’s context.

Everyone thought the statues would be whisked away to Antalya or Istanbul – but Fethiye Museum was the happy recipient of those.

But back to Antalya Museum – think Fethiye Museum on a much larger scale.

Antalya Archaeological Museum is one of the largest in Turkey but it’s far from boring.

Not that you’d think so if you saw it from the outside for the first time. It looks a bit like a school and it doesn’t look so big.

However, don’t let that put you off.

Take yourself through the doors and go in to see for yourself; because it’s like going into another world.

It’s amazing what clever presentation layout and lighting can do to within the walls of a boring concrete building.

And, as for context, well we’ve lived around these parts for over ten years now and have visited a lot of the sites the artifacts have come from.

Most of the finds in Antalya Museum are local.

We’re yet to make it to Termessos – a site close to Antalya centre and a site whose finds are well represented in the museum.

But there are also separate sections for displays of finds from Xanthos, Letoon and Patara.

Three places we know quite well.

The Perge room at Antalya Museum is really impressive and gives you a clear picture of what the grandeur of the city must have been.

Statue after statue, most of them intact – this was obviously a place of some significance.

Here’s what we made of our visit to Perge, Antalya.

And Perge has made the news again relatively recently, making it once again significant in the 21st century.

Currently, Turkey is on a mission to reclaim its artefacts from museums elsewhere in the world.

The top half of Herakles was in the Boston Museum of Fine Arts in Massachusetts and then archaeologists found his bottom half at the Perge site.

The two halves are now reunited and on display on a separate stage – with lights so bright, my photo of Herakles is really not worthy of appearing on this blog.

Just know Antalya Müzesi is proud to have Herakles back.

And then there’s the room of Lycian sarcophagi.

Highly polished granite and spotlights mean the sarcophagi reflect across the floors.

We’ve seen Lycian tombs galore since coming to live in Fethiye – they’re dotted about all over the place – and it’s a case of, well, don’t they all look the same?

We took so many of photos inside the museum – photography is permitted as long as you don’t use a flash – but you can go along and see for yourself.

One of the most important museums in Turkey, Antalya Museum is definitely a must see when you’re in the city.

And, when you leave the museum – well what a bonus! Antalya Museum is in the Konyaaltı area of the city.

Come out of the exit gates, cross the road and look to your right…and here’s your view.

You could even go down there, if you’re a beach person.