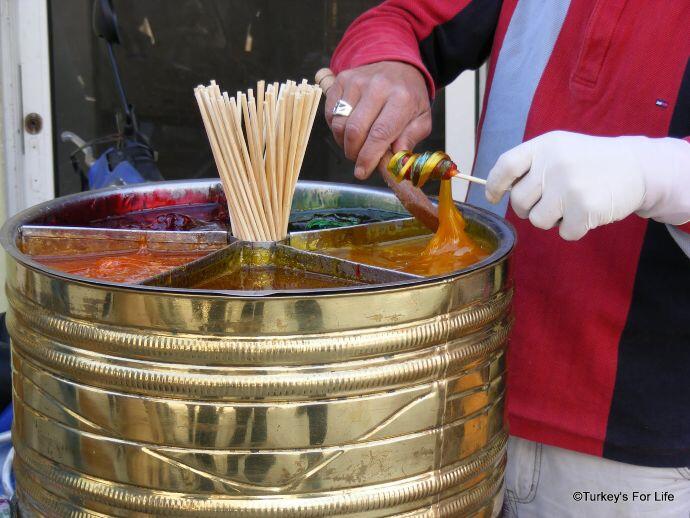 We were chatting with a friend a few nights ago about how Turkey seems to be rediscovering and embracing old traditions. 11 years ago, we came to Fethiye on holiday and smoked a nargile (water pipe), only to be told by waiters, ‘Oh, we have those just for the tourists. Nobody smokes nargile any more.’

On that same holiday, we sampled the delights of kokoreç, only to be asked by a Turkish friend, ‘Why are you eating that? It’s not nice food. Not good for you. I never eat it.’

Fast forward 11 years and nargile is a feature in most bars and restaurants in Fethiye – and it’s not the foreign tourists who are enjoying them (although these two foreigners still partake in the occasional nargile). The same Turkish friend who wondered why on earth we were eating kokoreç in 2000, now suggests kokoreç on a regular basis.

And then last weekend we were at the Üzümlü Mushroom Festival and as we walked up the street, we noticed a long queue of people. We followed the queue and eventually reached its source. This was a first for us.

A man was standing by a deep metal pot containing colourful, gooey, sticky, substances. He was doing a roaring trade. We asked our friend what it was and he replied, ‘Oh, that’s macun. Traditional Ottoman candy,’ as though it was something we see every day. We continued walking.

We’ve never seen this in all the time we’ve been in Turkey. Not that I would want to try colourful, melted sugar on a stick (I’ve not got a sweet tooth), but I was fascinated by this macun.

Each different flavour / colour is wrapped and twirled around the stick and, as you can see in the photo above, this guy was quite skilled in getting a neat rainbow swirl of colour.

We walked back down to the macun man later on so I could get the video above. By then, there was a younger apprentice who had taken over and his swirling skills weren’t quite as good as the older guy but you can see how stretchy the macun is.

We saw people walking around the festival with their Osmanlı Macunu and it appeared to remain stretchy and gooey on the stick. We thought it would solidify.

Have you ever tried Osmanlı Macunu? We were going to try it but (as you might well be able to hear in the video!) the seller ran out of sticks. We could have returned ten minutes later…but we just didn’t.