This post has been waiting backstage for a long time to see the light of day. The idea behind it is that it’s perfect Saturday-night-in-watching-TV food and so I wanted to do the post on a Saturday night. Except Saturdays in Fethiye came and went, and each time we remembered about it, it was never a Saturday. Well, today is Saturday! It’s Saturday night! Bring on the kanat! 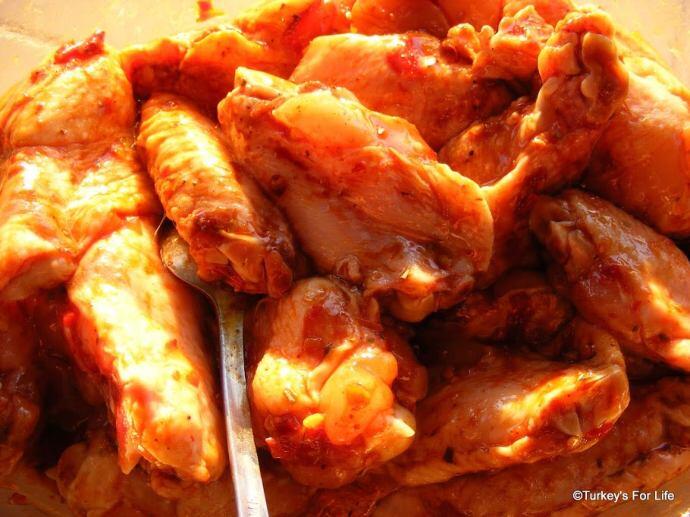 Kanat is a popular food in Turkey

We’ve been writing this blog for two years now so it’s surprising that it’s taken us so long to get round to writing about this meaty staple of Turkish cuisine; kanat. Kanat means ‘wings’ (in this case, chicken wings).

Kanat makes an appearance on just about every Sunday afternoon Turkish barbecue – and there are a lot of those! – because the people of Turkey just love their chicken wings. So much so that if you go anywhere to buy a chicken for the oven, the norm is not a whole chicken. Most chickens have their kanat missing. As a tip, should you want the whole thing, you need to shop for a bütün (whole) chicken. There will be many chickens available that look whole but if it doesn’t say bütün on it, your chicken is going to be minus its wings. Kanat is that popular. Even kömürde piliç is usually wingless with the kanat being sold separately. You’ve been warned! 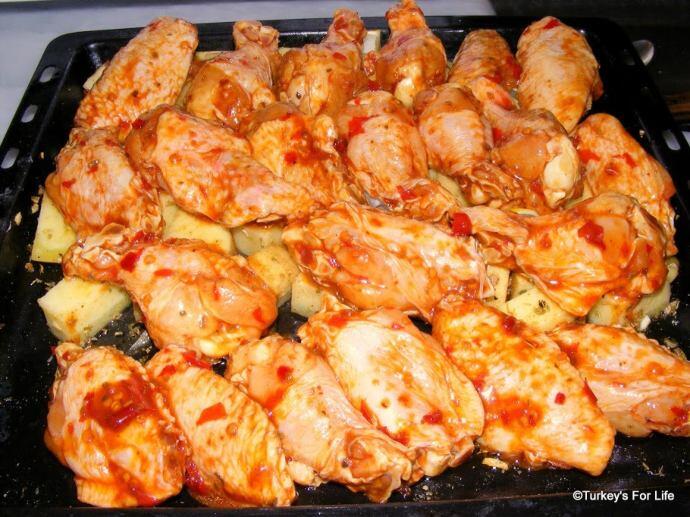 When we first came to Turkey, I was very much a chicken breast person, but I was soon converted to the joy of crispy-on-the-outside-juicy-on-the-inside kanat.

And so, let’s move on to the perfect Saturday-night-in meal. Forget the calorie count or the healthy side of greens; it’s Saturday night. And at least you can console yourself with the fact that this meal is much more likely to be better for you than similar offerings from a lot of the fast food joints out there.

When the oven pings to indicate all is crispy yet moist, turn on the TV, select your channel, plump the cushions on the sofa… 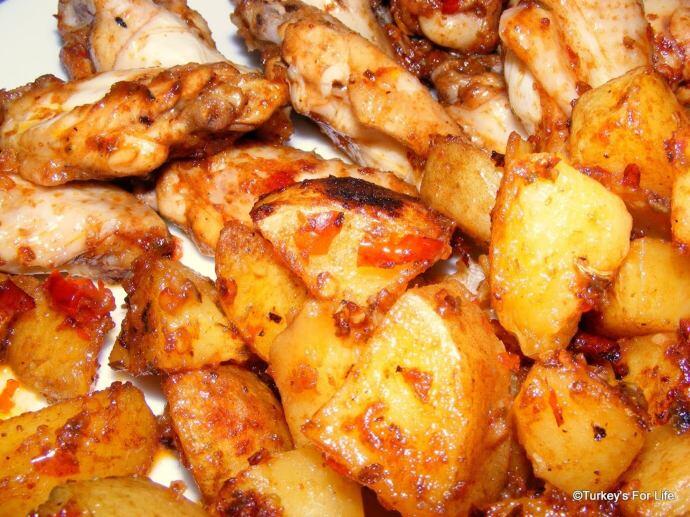 …and share the kanat and potatoes between two plates. Serve as they are or with a blob of süzme yoghurt. You can use a knife and fork if you want to – but why create washing-up? Fingers and thumbs will suffice. Watch the screen, munch your food, sip your beer. Saturday-night-in bliss!

What spices did you use?

In the method at the top - paprika, chilli flakes, lemon juice and some kekik (dried thyme or oregano) for the potatoes. :)

@ Mark: It's doable in a pan but you definitely wouldn't get quite the same effect. Worth a try though as we've fried chicken wings in the past and they've come out really well.

These look so good. Scout loves chicken wings. Lemon. Garlic. The potatoes mixed in is a perfect combination. Unfortunately, we don't have an oven. Can this be done in a pan with a lid?

Could have used these tonight!!