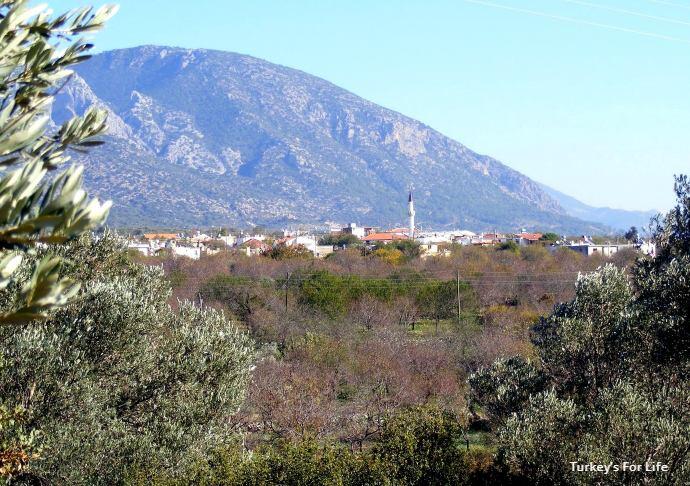 The Datça Peninsula; wild, windy and just stunningly beautiful. That’s the impression we came back to Fethiye with last Monday after spending the weekend there with friends.

It had been 8 years since we were last on this amazing stretch of land that juts out into the Mediterranean/Aegean Sea and, to be honest, while we remembered enjoying its beauty, we had forgotten how truly special it is.

We had forgotten that sense of sitting on the edge of the world while battling the winds and being reminded of the power of the ocean as it batters the defending cliffs.

Last weekend, we were going to the Datça Peninsula to stay with our friend’s parents in her father’s home village of Yazıköy a couple of miles inland from the more well-known coastal area of Palamutbükü.

It soon became apparent that this was to be a relaxation weekend in a stone, timber-ceilinged village house, being fed (too much) and watered by our friend’s parents – and yes, we’ve come back a few pounds heavier!

Where the forests of the Fethiye region and other Lycian regions of Turkey are covered in pine trees, the Datça Peninsula is covered in olive and almond trees. The olive trees grow in both tended olive groves and also wild on the windswept cliff faces.

A Sunday morning pre-breakfast stroll also told us that this time of year is harvesting season. The deserted village seemed deserted because the inhabitants were actually in full action, whacking olives from the trees in groves on the village outskirts. A great spectator sport (participation came a couple of days later).

The sun was going down by the time we arrived in Yazıköy on the Saturday afternoon and we assumed the loaded tractors and lorries we saw were filled with firewood for heating.

It was only in the morning that our friend’s dad explained about the olive harvest and our stroll soon confirmed his explanation: tons of olives were stacked in nylon sacks in random places along the road and in fields, weighing down the trailers of lorries and tractors.

We loved our short time in Yazıköy. It’s a typical Datça Peninsula village, big in Turkey’s olive and almond production and, like other villages in the area, it’s also a village in very obvious transition with an uncertain / interesting future.

Our friend told us that, like her, many of her childhood village friends went off to university and they now only visit Yazıköy in the summer months. But, where many coastal Turkish villages are either slowly becoming abandoned or are being developed and adopted by expats and foreign holidaymakers, Yazıköy looks to be taking on a different identity.

My childhood neighbourhood in Wigan was one where everyone knew each other and we all walked in and out of each other’s houses without waiting for a ‘Come in.’ This behaviour is in full flow in Yazıköy and it was lovely to see again.

So many people wondered into the house and said “Hoşgeldiniz” (welcome) to us as they plonked themselves on the sofa, had a quick chat, watched a bit of tv and then wandered back from whence they came. Any random person we saw in the street also immediately spotted us for the strangers that we were and shouted hoşgeldiniz.

But, olive and almond harvesters aside, there’s no denying the village was quiet while we were there. Yet, along each cobbled street, homes are being (very) sympathetically renovated and we saw a couple of young Turkish families cruising around in 4-wheel drives.

These are the people who left Yazıköy to go to university and find jobs in the cities. They’re also city people staying in the village, using it as a retreat.

This little, windy area of the Datça Peninsula (Yazıköy is surrounded by open sea on three sides) has captured our attention because it feels different. Olive and almond production continues. Whether that is in danger or not, we really don’t know.

But, what is encouraging is the return of the new generation. At the moment, this looks as though it’s going to be a seasonal return. But a lot of money is being spent on some of these homes, we have the internet, we have people working from home. Modern technology could well be the saviour of villages like Yazıköy…