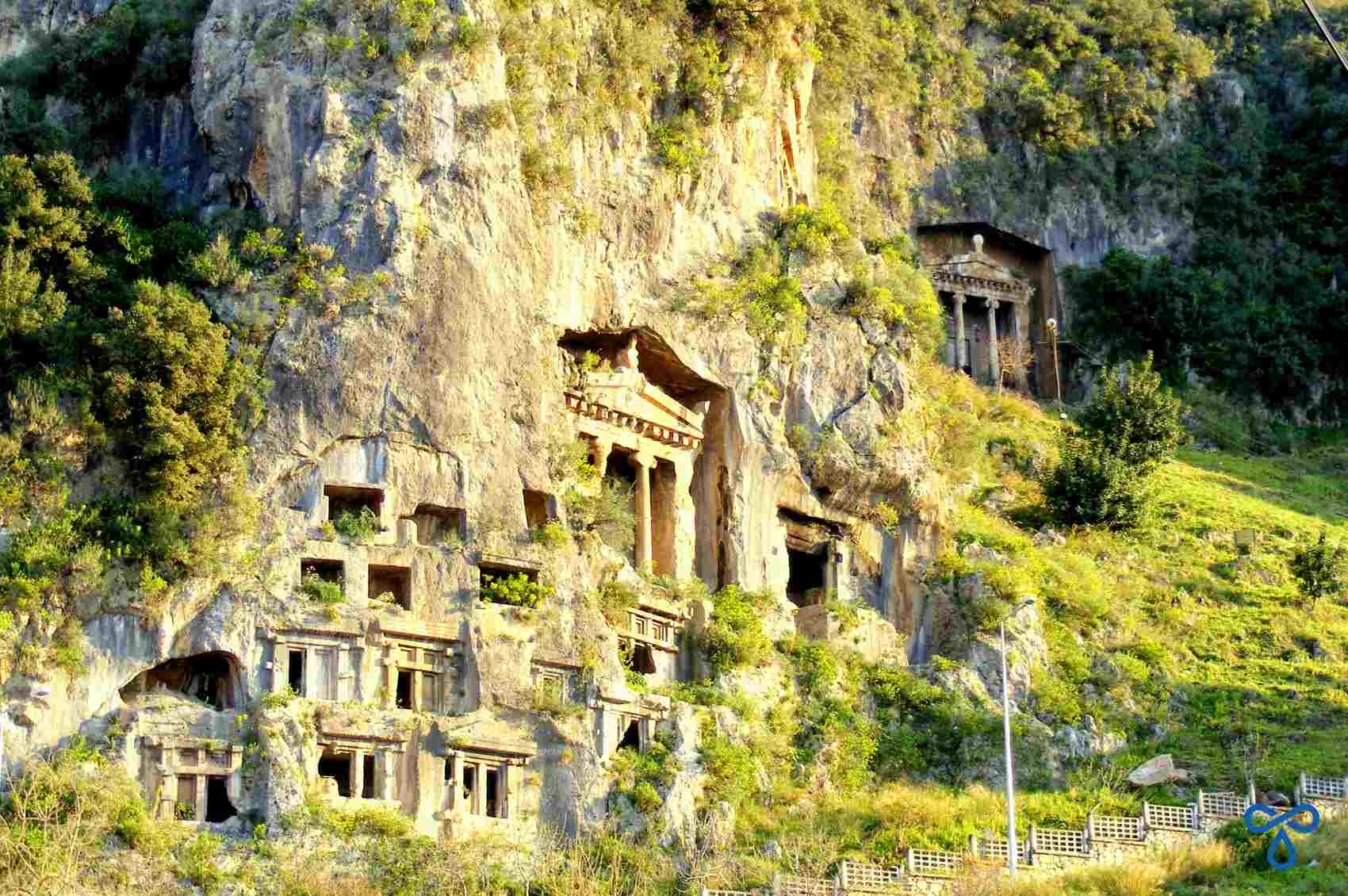 On Sunday, we told you that we had decided to make the most of the fabulous spring Fethiye weather and follow some of our own advice about things to do in Fethiye. It’s time to get out there and make the most of what’s on offer right on our doorstep so we kicked things off by taking another stroll to one of Fethiye’s most famous landmarks, the Lycian rock tombs.

Being that the Lycian rock tombs are carved into the cliff face, high above the town, the tombs are easy to spot and getting to them is easy enough – if you don’t mind a bit of an uphill pull that is.

Just keep in mind the reward of the views over Fethiye once you reach the top and that should be enough to keep you going.

Chances are, you’re going to be out of breath by the time you reach these steps that take you to the highest and most important rock tomb, the Tomb of Amyntas, but never fear.

The Kings Garden Restaurant is right by the entrance to the tombs and you can get a drink and a breather there before continuing. That’s exactly what we did – but more on that in the next post. For now, we have some steps to climb.

The ancient Lycians liked to live with their dead nearby and that means people like us benefit from relatively easy access to the tombs while enjoying panoramic views over Fethiye.

Take your time climbing the steps to make the most of the opportunities for photos.

Eventually, you will reach the Amyntas rock tomb. Dating from the 4th Century BC, it’s typical of a Lycian tomb as it is carved into the shape of a temple portico with the entrance at the bottom right.

Not much is known about the Lycians but we know Amyntas was important as his rock tomb is higher and larger than the others carved into the cliff. It’s also the only tomb you can get right up to.

The tomb itself is an impressive sight but not in fantastic condition. Last April, we posted about an article we read in Hürriyet which heralded the use of ground breaking nanotechnology to restore Fethiye’s Telmessos Theatre and the famous Dalyan Lycian rock tombs.

The same treatment has also been assigned to the Lycian tombs of Fethiye. We’ll wait and see…

But let’s leave the politics of archaeology and restoration behind and turn our backs on the tomb of Amyntas to take in the views of Fethiye. T

he Lycians obviously wanted to make sure their leader had a decent view from which to enjoy his afterlife!

Once you’ve exhausted just about every angle and had your fill of taking photos of the views, head back down the steps and take a right, downhill towards old Fethiye.

This is where you will see the tombs of less important Lycian figures grouped together in the rock face.

Despite being smaller than the tomb of Amyntas, as an archaeological feature there’s more in this group of tombs to keep you interested. No panoramic views for these guys though. Their sea views were obscured long ago by the growth of Fethiye.

Just before you hit the buildings of the old Fethiye neighbourhood, don’t forget to turn round to get a photo of all the Lycian rock tombs in the same shot. This angle shows how set apart the tomb of Amyntas is from the rest.