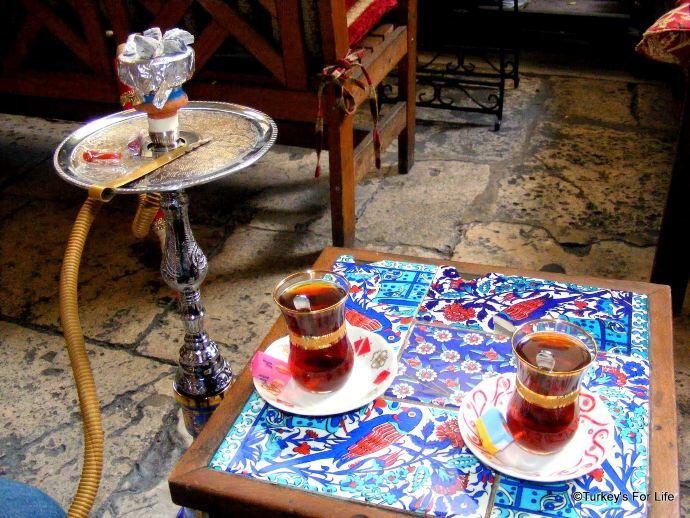 The first time we ever went to Istanbul we studied guidebooks carefully for all the must-sees; where they’re situated, what days they’re open, how much the entrance fee is. It was like a military operation because a trip to Istanbul was the fulfilment of an ambition for both of us. We wanted to make the most of it.

One of the guidebooks we were studying was the DK Eyewitness Travel guide to Turkey. Some guidebooks serve their purpose as a good read while others do a great job of tempting the would-be traveller through colour photographs, supported by snippets of information.

The Eyewitness Travel Guide to Turkey falls into the latter category and whilst leafing through the Istanbul pages one day, I saw a photo of a peaceful-looking, historic area where people could go to smoke nargile (water pipe) and drink çay.

That place was Çorlulu Ali Paşa Medresesi, and although I paused over the picture and wanted to be there right now, I pushed it aside and forgot about it. How were we ever going to find somewhere so small, in a city as big as Istanbul, with only five days to play with?

During that first visit to Istanbul, we were walking back to Sultanahmet from Süleymaniye Camii and were on the lookout for a çay bahçesi (tea garden) where we could escape the crowds for a while and chill out. We spotted this archway, saw çay was being served and headed through.

You can imagine my unexpected glee as I realised we’d stumbled straight into the little world – Çorlulu Ali Paşa Medresesi – that I thought we had no hope of finding. Since that moment, every trip to Istanbul has involved at least one visit to this hidden oasis of peace and tranquility.

As soon as you enter the passageway that leads you towards your haven, it’s obvious what the main pastime of choice is in this little area. Pans of white hot coals throw off a gentle heat as you pass; people come here to ponder the world, to muse about life…and whilst doing so, they smoke nargile and slurp çay.

From the beeping of horns, passing of trams and the dodging of people along the crowded pavements, the visitor to Çorlulu Ali Paşa Medresesi is taken back in time (to the early 1700s) and thrust into an area of calm.

It’s a shock to the system – but it’s a pleasant shock. Sit yourself down on a pew, breathe, take in your surroundings.

Hand-painted domed ceilings, stone paving, the mixed aromas of fruit tobaccos, the tinkle of teaspoons against the tea glasses, the bubbling and burbling of the water as nargile smokers inhale the smoke before allowing it to exit mouth and nostrils in thick, cloudy plumes. This is perfect people-watching territory.

Çorlulu Ali Paşa Medresesi is no secret and is mentioned in many tourist guidebooks, but we never let things like that put us off.

As with Çiçek Pasaj, along Istiklal Caddesi, the odd tourist that does wander through the passage from the street emerges into the courtyard and then it’s a quick scan of the area, a fiddle with the camera lens, a few snaps and they’re off, back the way they came.

As for the patrons – those who come here to smoke, drink, chat or muse – most of them are local to the area. Men in suits on their lunch break, older retired people meeting up to catch up on gossip, men of all ages meeting up study the racing pages of the newspaper before discussing their choices and then placing their bets via their mobile phones.

When the waiter comes over, order your çay, order your nargile (we always go for apple-flavoured tobacco) and then sit back and take all in. A visit to Çorlulu Ali Paşa Medresesi is well worth a couple of hours of your time.

The coals on your nargile will be changed at regular intervals, you’ll get through at least two or three glasses of çay – and if you’re anything like us, you will become totally lost in your own little world of people watching.

Before leaving, prepare yourself for another shock to the system as you suddenly find yourself back in the fast-moving, real world of Istanbul.