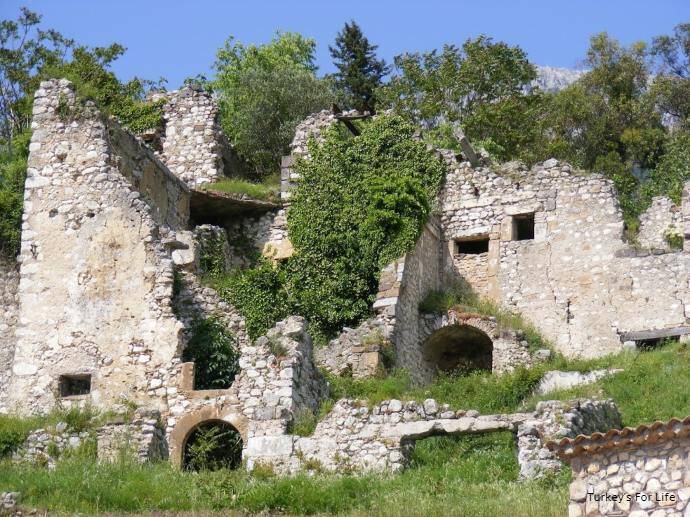 If you know Southwest Turkey well, looking at the following series of photos, you would be forgiven for thinking you were looking at shots of the ruins of Kayaköy near Fethiye.

During our recent trip to Italy, our friend took us out for the day, and when we asked him where we were going, his reply was, “I’m taking you to Italy’s Kayaköy. San Pietro.”

We’d done our research before heading off to Italy and new about the horrific Second World War battles that took place around the area where our friend’s family is from, near Cassino.

What we weren’t prepared for, however, was the evidence and the memories of those battles that completely surround this area.

Like Kayaköy, San Pietro was once a thriving village with a modest population.

The village is built from local stone and locals made their living by making goods from the strong, local grasses.

Sadly, the original site of San Pietro now lies abandoned because of decisions made by others that were beyond the control of the villagers.

This is the view of the entrance to the Liri Valley taken from the village. During the Second World War, Allied troops had the formidable task of making their way northwards, through this valley and towards Rome while German troops occupied the higher ground.

As they made repeated attempts to advance towards San Pietro, suffering many casualties, the Americans soon renamed it Death Valley.

While the locals of the village were hoping to be liberated by the Allied troops, the occupying German troops conscripted able-bodied men to help them set up defences.

Women, children and older people were told they were being evacuated and, just like the people of Kayaköy, the villagers hoped they would be able to return at a later date.

Some villagers chose to flee close by and hid in this network of caves in the woodlands.

The rock is soft and they were able to carve shelves, sleeping areas and fireplaces.

They were also able to dig holes into the floor so the families could hide the men from the German soldiers.

As the Allied troops advanced, fighting was fierce and many of the villagers hiding in the caves were killed by shells landing near the entrances.

The whole village of San Pietro was destroyed by shelling and grenades.

It soon became obvious that the people of San Pietro would not be able to return to their ruined village and the modern day village now lies further down the hillside.

Until 2010, these ruins sat abandoned – but now there is a museum and visitor centre with visitors coming along to learn about the history and the fate of San Pietro.

It would be nice to see something similar at Kayaköy.

This area of Lazio, Italy is full of reminders of the horrors of the battles that took place here during the Second World War. During our time in the area, we also visited the war graves of Polish troops and those of the Commonwealth troops at Cassino War Cemetery.