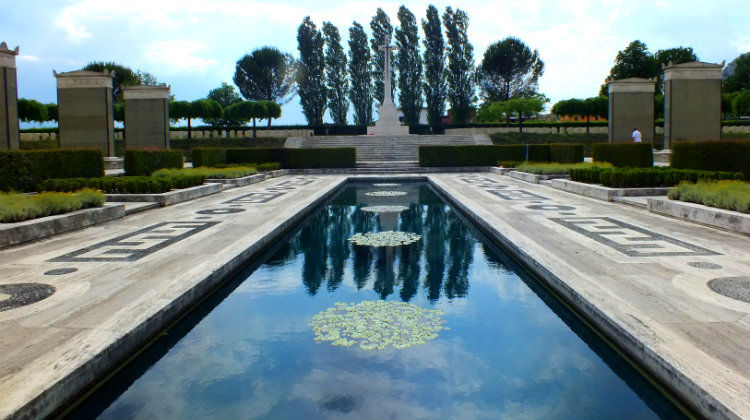 This was our second attempt at trying to visit Cassino War Cemetery where the Commonwealth servicemen who lost their lives during the fierce battle of Monte Cassino are laid to rest. In 2012, when we were last in Italy, we’d tried to find it then. Our friend’s family home is in the area, close to the small town of Cervaro, so they obviously know where they’re going when they’re out and about…

But this was one of many of those occasions where we unintentionally found ourselves comparing Italy to Turkey. We knew we must be close to the Cassino War Cemetery (our friend has visited on numerous occasions) but roadworks, diversions that took you to nowhere in particular, a couple of new roads and a roundabout (that signposts were yet to be placed around) meant we got a scenic tour of Cassino and surroundings – but no visit to Cassino War Cemetery. How many times have we been similarly ‘lost’ in Turkey?

By the time we went to stay with our friends again in the early summer of 2015, clear road signs took us straight to the Cassino War Cemetery. On arrival, we got out of the car, looked up at the grand yet stark entrance and took a deep breath before entering…

We’ve spoken to different people and read various comments on our Facebook page about war cemeteries and all agree that it’s a weird feeling to actually want to visit these sites and spend time there. Yes, of course you go there to pay your respects but they’re also such peaceful, immensely moving spaces to wander around, to take stock and bring a few things into perspective. Where once there was so much atrocity, there’s now serenity.

So many young lives lost, Cassino War Cemetery is the resting place of almost 4,300 Commonwealth servicemen including those of the Irish Brigade. Around 300 of the graves in the cemetery are graves of unknown soldiers whose graves are simply marked with a cross and the words, ‘A Soldier Of The Second World War. Known Unto God.’

The graves of the unknown soldiers are scattered amongst those graves with names, dates, short family descriptions. Dissecting the simple, plain white graves of individual servicemen is the heart of Cassino War Cemetery, the Cassino Memorial, and this also has the names of around 4,000 servicemen who lost their lives in the Italy campaigns – including those in Sicily – but whose final resting places are not known.

Apart from being an immensely fierce battle in which German and Allied troops gained a mutual respect for each other, the battle is also synonymous with controversy, resulting from decisions made by superiors at the time. We touched on this when we wrote our blog post about our visit to the Polish War Cemetery which lies just below the monastery atop Monte Cassino; this blog post is about Cassino War Cemetery.

For those interested in the Battle of Monte Cassino , there is a lot of information out there where you can do your own research – the book we recommend at the end of this article is excellent; emotive, readable and widely respected as an historical account of events.

From Cassino War Cemetery, you can see Monte Cassino itself, with the rebuilt Monastery of St. Benedict watching over the town and the valleys below. Wherever you are in Cassino and nearby villages, the monastery is visible. It doesn’t take an expert to see just one of the reasons why there was such loss of life during the Battle of Monte Cassino. The Germans had created the Gustav Line which held high grounds such as Monte Cassino. The Allied troops were attacking from below in particularly harsh winter weather...

Now, the scene here is one of serenity. This area of Lazio is mountainous, carpeted in lush greenery, rivers meandering through villages and valleys (the ‘meandering rivers’ were violently gushing rapids during the battle and many troops drowned trying to cross). Around the Cassino environs, it’s also an area of poignant cemeteries like Cassino War Cemetery, of monuments, commemorative plaques, museums, abandoned villages like San Pietro, rebuilt towns and, aptly, fields and roadsides of gently swaying, crimson poppies in springtime.

And, as for Cassino War Cemetery itself, such peace. Just the four of us, another international family (were they here to visit one grave in particular?) and a young Italian couple; they were just sitting. All of us there for our own reasons…