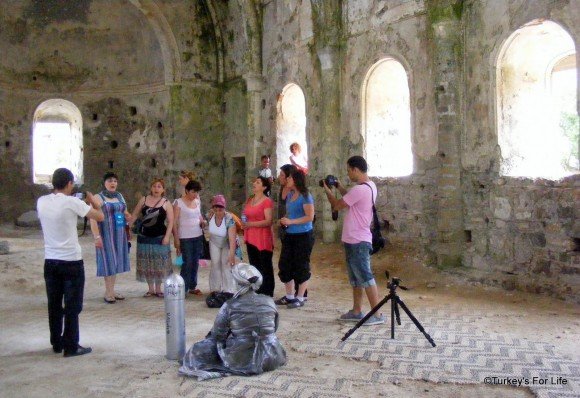 Where arts and culture are concerned it’s been a busy fortnight in the Fethiye area, and events are set to continue through this week too.

A couple of weeks ago, it was the Kayaköy Cultural Connections Festival.

And, on Saturday afternoon and into the evening, it was the turn of Kaya Village photography exhibitions, art and live music performances, organised by Kaya Art Camp and friends.

After our Kayaköy photo post last week, we decided to head up there again to see what was going on.

We’re glad we did. Fethiye’s Beşkaza Meydanı (the new town square) has been the scene for fantastic, nightly world music performances.

One or two of those musicians took time out to head to the upper church and Poseidon Restaurant to perform some world music in Kayaköy.

A few low key performances, fitting of the atmosphere that’s special to Kayaköy.

Apologies to these ladies because we don’t know where they were from.

But they sang acapella inside the upper church while people milled around outside, looking at the photo and art exhibitions.

There was an easy, relaxed feel to the afternoon.

No one was in any rush to perform. No one looked as though they were working to a timetable – we don’t know if there was any fixed timetable.

These children from Bulgaria performed two songs before a group performed some English folk songs.

This lady had the most beautiful folk singing voice, and the acoustics in the church courtyard were just perfect for her sound.

He treated us to a solo performance while the other musicians accompanied him.

And then we started to make our way back down the hill and to Poseidon.

There, the guys from Cafe Park Teras were preparing complimentary glasses of punch (of the alcoholic and non-alcoholic varieties) and complimentary canapés were brought round for everyone.

These had a distinctly Turkish twist to them of course: sigara böreği and mercimek köftesi served with cocktail sticks.

The youngsters from Bulgaria entertained us all while we ate – and then this guy had everyone up dancing – you wouldn’t believe the sound this little saz can make!

And then it was back to our friend the fiddler again. This time he was singer, too, and accompanied by guitar.

The day at Kayaköy continued into the evening, but we took the opportunity of an early lift home from a friend.

Because the Fethiye Culture and Arts Festival is running through to May 11th. Lots more opportunity to take part in this great event.

Below is a short video of the performance by the folk musicians singing in English.

We hope you enjoy the lady’s singing as much as we did.

Most events are taking place at Beşkaza Meydanı and the Fethiye Culture Centre (the big blue building on the edge of the square).