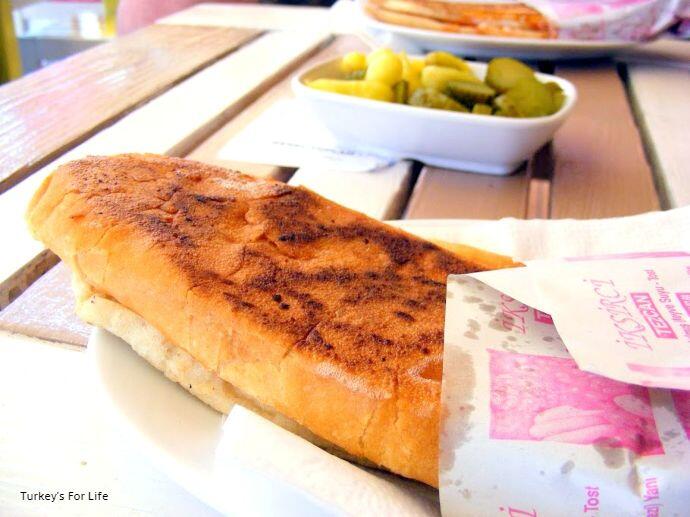 When friends and family come to Fethiye on holiday, routine goes through the window and the kitchen becomes a tad neglected as we grab snacks here and there, en route to their hotels and apartments to meet up with them.

Fortunately, in Fethiye, this habit doesn’t have to break the bank because there are little Turkish treats to be had – such as one of the best, most simple Turkish street food staples; tost.

Wherever you go in Turkey, you’re going to see signs and boards dotted around the area, outside snack bars, advertising tost.

Expect a heavily pressed half bread with any variations of those fillings. (We regularly make tost at home…in a slightly more exaggerated version.)

But some tost is better than others and, fortunately for us, Fethiye has its very own tost institution. These guys are the ustas of tost: Iksirci Tezcan…

‘Usta’ means ‘master’ and their title is deserved. For as long as we can remember, these purveyors of fine tost have been trading under the shade of the trees on the corner of Fethiye harbour, serving workers, school children, passers by and tourists.

And, for as long as we can remember, apart from a recent facelift to bring it in line with the other buildings around Uğur Mumcu Park, nothing much has changed. You come to sit at Iksirci Tezcan in Fethiye to eat one thing only: tost!

(We should add that there are now a few extras on the menu at Iksirci Tezcan but for many, this is still the tost centre.)

The chairs and tables had a fun paint job during the facelift process but they’ve always been the same, too. Tall people might struggle a bit as both the chairs and the tables are tiny – don’t even think about trying to tuck your knees under the table – but that doesn’t seem to bother the folks that flock here day in, day out.

We’ve never seen this place empty and you’ll struggle for a table around lunchtime. As you can see from these photos, our eating times have been a bit unconventional of late and we managed to get to Iksirci Tezcan at a rare quiet spell.

The menu board, along with prices, is nailed to the surrounding walls, but you won’t need to peruse it for long. You can either have a yarım tost (a half bread which you can see in the above photo) or a çeyrek tost (that’s the tost in the photo, cut in half – çeyrek means quarter).

And, as is the staple with Fethiye’s snack bars these days, you’ll be asked if you want ketchup and mayonnaise inside it, too.

We always go for a karışık yarım tost which is cheese and sucuk and, despite not being big fans of the ketchup mayonnaise fashion, we always say yes to the offer. It seems to work well on the tost.

Because the kitchen area is such a continuous conveyor belt of pressed bread and fillings, your mixed tost is delivered to your table within a matter of minutes and, with it, a bowl of Turkish pickles (turşu).

This side dish of turşu is the perfect accompaniment and, to be honest, just as important as the tost as far as we’re concerned! The thought of tost without turşu…oh, enough to make you shudder!

And what about a thirst quencher at Iksirci Tezcan? There’s water, the usual fizzy drinks, cartons of ayran or this…

How about this for a perfect thirst quencher on a hot, sunny day in Fethiye? Freshly squeezed mixed fruit juice.

The great thing about Iksirci Tezcan is they have a regular supply of fruit which goes into their drinks but they also use seasonal fruits, too. So in summer, you might get melon in your fruit juice whilst autumn brings with it the wonder of the pomegranate.

Apples and carrots are often seen in the fruit baskets, too. In the mixed fruit juice above, there’s definitely orange and pomegranate in there – but which of the other fruits and vegetables went into this concoction, we’re not entirely sure.

What we do know for sure is it’s perfectly refreshing after you’ve finished your tost. And, if you go for tost at Iksirci Tezcan in summer, it’s sooo difficult not to drink all of your fruit juice within a matter of seconds before your tost has even made an appearance. But then you could always order another glass because…

…The next great thing about Iksirci Tezcan…if you’re in Turkey on a budget, this is the place for you.

3 TL gets you a yarım tost. This mixed fruit juice is the most expensive drink on the menu – that’s 3 TL, too. 6 TL (around £1.50) to sit and watch the world go by along Fethiye harbour, fill yourself up and then quench your thirst with a healthy vitamin boost. Now that has got to be a bargain for anyone, hasn’t it?