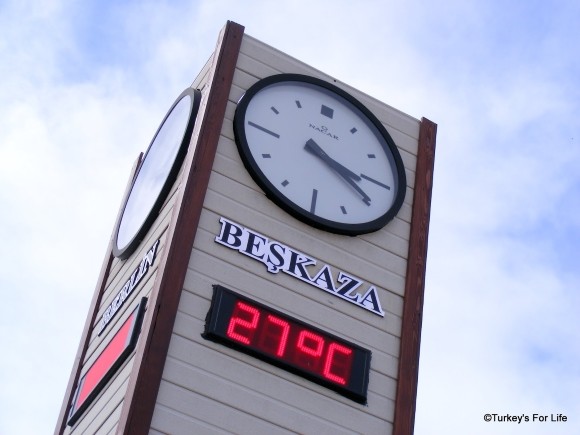 There’s always something to learn, living in Turkey.

How long have we lived in Fethiye? How long had we been coming to Fethiye on holiday before that?

Well, Fethiye has been part of our life since 1998, and, yet, it was only relatively recently that we heard the phrase, ‘Beşkaza.’

And since then, we’re hearing it and seeing it everywhere.

Why is this? Pure coincidence that now we know the phrase, we just recognise it? Or is Beşkaza making a comeback?

If you’re reading this and wondering what on earth we’re going on about, allow us to explain:

How Beşkaza Introduced Itself To Us

Recently, we’ve been in contact with some passionate Fethiyespor fans who are behind the (now-defunct) blog Fethiyespor1933.

If you remember, they want more foreigners to go to the matches and they managed to convince us to go to watch the Fethiyespor 80th anniversary game.

During the passing back and forth of messages, one of them said, jokingly, “Now you are Beşkazalı.”

We both looked at each other. “What’s Beşkazalı?”

We let it go and the conversation continued.

And then the day of the match came.

We were following the Fethiyespor Facebook page updates and noticed that there was going to be a gathering in the morning at Beşkaza Meydanı (meydan is town or village square).

Where’s Beşkaza Meydanı? – we thought. We don’t know our town as well as we thought we did.

Well, it appears the new Fethiye town square that we’ve written so much about is called Beşkaza Meydanı.

Is this official or does everyone just call it that? Whatever the case, there’s certainly more official acknowledgment of that, and we’ll show you why:

When it was being built, the main talk about the new town square was that Fethiye was about to get its very own clock tower.

And, true enough, the clock tower did indeed appear. There it is in the photo above.

Not on the ornate scale of Ottoman versions like Izmir Saat Kulesi but we are in the 21st century. And its design matches the rest of Uğur Mumcu Park, where the clock is situated.

When they walk past the tower, the folks of Fethiye now know what time it is in Moscow, Berlin and London.

And they also knew what time it was in Istanbul.

As we’re always walking around taking photos of Fethiye, this didn’t go unnoticed by us.

It seemed a shame that this side of the clock tower didn’t say Fethiye on it. After all, it was our new Fethiye landmark.

You know we love our trips to Istanbul, Istanbul is our favourite city. But this is Fethiye. This is where we live.

And maybe other people thought the same thing we did.

Like we said, not much goes unnoticed by us, and recently, we noticed the ‘Istanbul’ has now quietly disappeared to be replaced by…

Yes, Istanbul has made way for, not Fethiye but Beşkaza.

You can understand why we started to become interested in this word – it had now popped up three times in one week – and we needed to find out its meaning.

As far as we were concerned, beş means five and kaza means accident. ‘Five accidents’ didn’t really make any sense to us!

We asked friends and we looked on the internet.

Not much help available on the internet. So we set about asking as many of our other friends as we could.

They all laughed and told us the same tale:

A Little Story About Beşkaza

The seat of the Ottomans was in Istanbul and the empire was vast.

As such, each area needed a judge to keep law and order. Except our little corner of the Ottoman Empire wasn’t quite so easy.

In this case, kaza means not accident but borough or township.

Let’s say the inhabitants of these five neighbourhoods (Central Fethiye, Üzümlü, Kemer, Esen and Seki) in today’s Southwest Turkey were a bit unruly, a tad on the feisty side.

They were hard work for the authorities. And they needed not one, but five judges (kadı) to keep law and order.

So next time you walk past the 21st century Fethiye clock tower (or should that be Beşkaza Saat Kulesi) and you see this word, you’ll know what it means.

And you’ll know it’s a piece of history from centuries previous.

(This story is picked up from friends around Fethiye and bits may have been lost in translation – but you get the gist. We’d love to know more about the history of Beşkaza. So if you’re familiar with it, please let us know in the comments below. Thanks!)