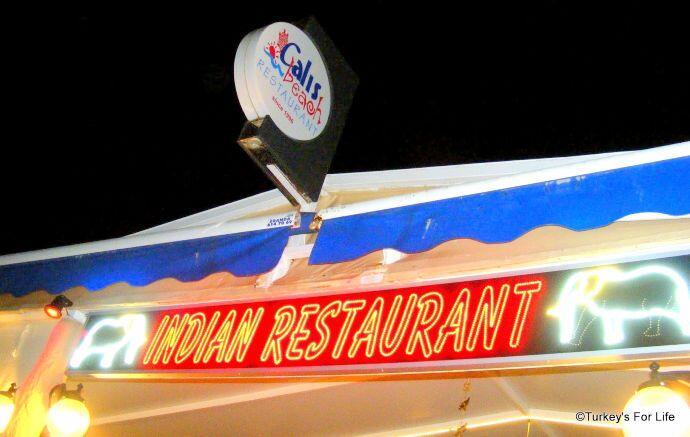 We were beginning to get a bit paranoid. Paranoid that whenever we wrote about somewhere good to eat (wherever we are in Turkey, but particularly in Fethiye) we were putting the kiss of death onto the place. One or two of the restaurants or cafes we have written about in the past have, unfortunately – and unrelated to the quality of food they were serving – not survived to tell the tale and have closed a few months after we’ve done our post.

It’s a fact of life here. But we were pretty convinced that when we wrote about Indian restaurant, Bombay Corner, in Çalış, we were on safe-ish ground. It had been there a few years, had established itself, and was still relatively popular. And anyway, we loved the food so we wanted to tell everyone that. And then it disappeared – literally! We went past on the dolmuş one day and not only had the restaurant closed, the whole building was gone. Unbelievable!

We assumed that was it and felt a bit sad, really. It was our go-to for Indian food. Then back in April (yes, that’s how long it’s taken us to get round to doing this blog post) my dad came out to visit and we were walking along Çalış Beach enjoying the sunset.

We knew different people had taken it over and then we saw the familiar faces of the people who had always served us in Bombay Corner standing outside. We looked to the sign: Çalış Beach Indian Restaurant. Brilliant!

They assured us the food was exactly the same, so we all sat down to test out the claim. If you compare this photo to our previous food photos of Bombay Corner, you’ll see the claim was reality – and you’ll also see we’re creatures of habit, ordering the same dishes all the time.

The jalfrezi is still super hot with whole, fiery green chillies daring you to try them and poppadoms with dips are still just as moreish as they’ve always been…and we still fight over the onion dip! You can never have too much onion relish dolloped onto a crispy poppadom!

So, it was with relief that we ate our Indian meal back in April. Relief that we still had a go-to without having to conduct research around the area for Indian-food-fix satisfaction. And there’s also a vast improvement, too…

We used to forgive Bombay Corner its main road setting just because we liked the food so much. But beeping horns and the revving of engines at traffic lights on the junction have now given way to sitting by the sea with beautiful views over towards the lights of Fethiye. We’re looking forward to more meals with views like this at Çalış Beach Indian Restaurant…hopefully for many years to come.

Çalış Beach Indian Restaurant is along the beach. At the main entrance, turn right and it’s near the Güneş Hotel. You can view it on our map of Fethiye.