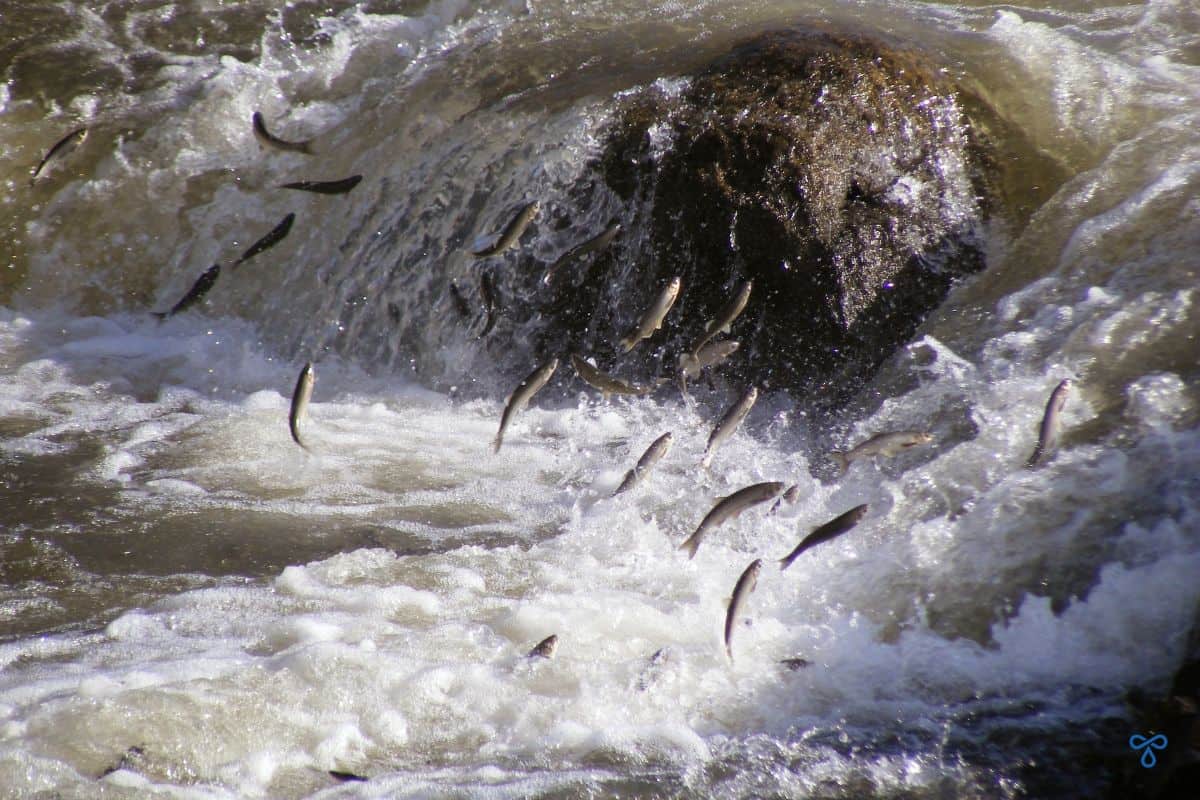 On our recent trip to visit a friend in Eastern Turkey, we were lucky enough to be around just as the annual Inci Kefal (Pearl Mullet) migration started.

Every year, in May and June, thousands of fish swim upstream from their home in Lake Van for spawning season.

This is Erciş and we’re on the northwest shores of Van Gölü (Lake Van), looking over one of the lake’s tributaries.

Of course, Erciş is more well known for the horrendous earthquake in 2011 that killed hundreds of people, so it felt quite strange to be walking along a peaceful river amongst the wildflowers.

The only previous photos we’d seen of the area were scenes of devastation. But this post is about springtime and new life.

As soon as we arrived in the town of Patnos to stay with our friend, the conversation around the town was all about the fish beginning their journey.

“They’ve started. You can see them.”

People were smiling as they talked about it.

It’s obviously a big event around these parts so we made a date to go and see for ourselves.

The Trip To Erciş

The tributary meanders peacefully towards the lake for most of the way. But we didn’t have to look far before we could see the seagulls hovering overhead.

At this point of their journey, the silvery inci kefal have had a relatively easy time of it.

But they’re about to hit strong rapids and they’re all backed up, waiting their turn to attempt to make it further upstream.

As you can see, it’s easy pickings for the seagulls. A foodie party for them.

Time and again they plunged into the water, exiting with their prey clamped in their beaks.

The fish is known as Inci Kefal (aka Alburnus tarichi/Pearl Mullet/Tarek/Van Fish) and it’s the only species of fish known to live in the brackish waters of Lake Van.

The fish is also unique to this area of Turkey making it prized by locals.

It’s a big annual attraction, standing on the viewing platforms to marvel at the spectacle of all these mullet carrying their eggs upstream.

There’s a festival here in June to celebrate this wonder of nature.

The viewing platforms are above these rapids and you can see these little inci kefal have a tough task to try and overcome their hurdle.

We stood for some time, watching the fish leap from the water and land half way up the gushing waters, only to be washed straight back down again.

No Luck, This Time

We didn’t see a single success all the time we were there.

Unlike the meaty salmon we see swimming upstream elsewhere in the world, these Inci Kefal are delicate looking creatures.

And, to our untrained eye, their task seemed hopeless.

Where can their energy and strength possibly come from?

Maybe, as June arrives, the Inci Kefal that arrive to this stretch of the tributary are bigger and stronger; strong enough to swim against this relentless current towards their intended destination.

Some of the pearl mullet must make it eventually.

But, for now, all we could see was an area of water packed with thousands of determined fish trying to make the jump.

Some were even trying to slither across dry areas of rock. They were always foiled by the force of the water on the opposite side.

While being amazed at the sight, we also felt a bit sorry for the fish.

You could literally dip your hands into the water and bring them back out packed with wriggling fish.

That’s what people did in years gone by. And, as this is spawning season, inci kefal started to dwindle in numbers.

They’re now on the endangered species list and fishing for them is officially forbidden.

Once the inci kefal reach their destination, they spawn their eggs and return to their original habitat of Lake Van.

No doubt the journey back home, swimming with the flow of the river, is a much easier affair than the one they made previously…