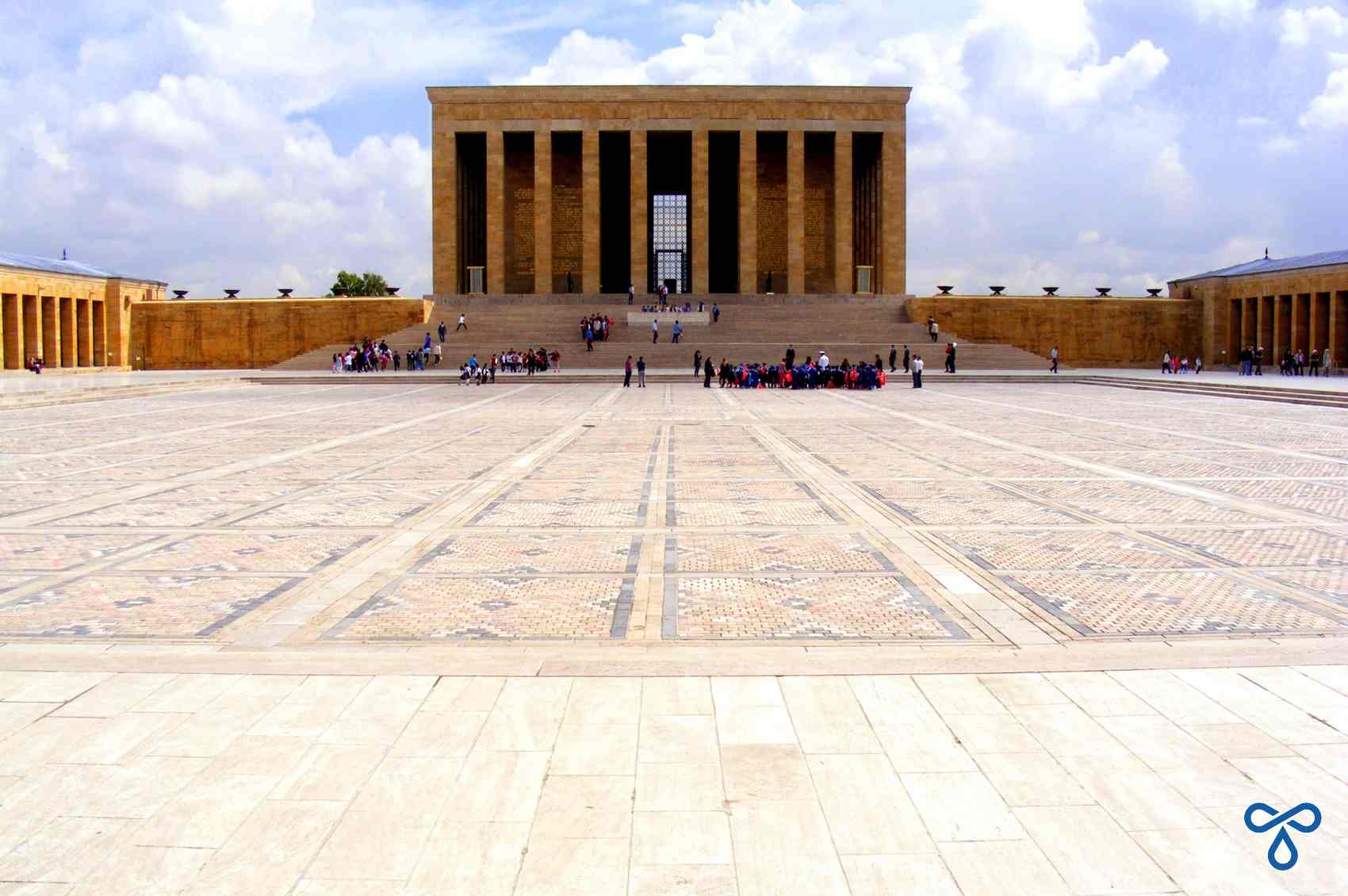 Today is the anniversary of the death of founder of the Turkish Republic, Mustafa Kemal Atatürk. He passed away in Dolmabahçe Palace at 9:05 am on this day in 1938.

Anıtkabir – The Mausoleum Of Atatürk

Atatürk’s mausoleum, Anıtkabir, is in Ankara, and you may remember, while we were there back in May, we were determined not to leave the city without visiting Anıtkabir and paying our respects. It was our last morning in Ankara before we got the train eastwards in the evening. For some reason, I ended up taking charge of how we were going to get to Anıtkabir. (Anyone who knows me knows my sense of direction is non-existent so I’m really not sure how this came about).

Anıtkabir Could Be Seen From Everywhere

Anıtkabir is built on Rassattepe (Observation Hill) which was chosen so the mausoleum could be seen from all parts of Ankara. No doubt the view is obstructed in places these days due to development, but, from the places we visited, Anıtkabir was an almost constant presence. And it always looked a long way away. (The photo below is the view of Anıtkabir from Ankara Citadel and we could also see it from the balcony of our hostel).

A quick bit of online research revealed we could jump on the underground metro at Kurtuluş just down the road from where we were staying and get off at Tandoğan. Anıtkabir is walkable from there. So that’s what we did. And at Tandoğan station I looked up above the door to see an arrow pointing to the left for Anıtkabir. So we set off confidently…and yes, I’d led us up the wrong left…and we’d walked a while before Barry pointed out that the area was very flat and Anıtkabir is on a hill…and it started raining. Life lesson: Never leave Julia in charge of directions.

A bit of count-to-ten-and-take-a-deep-breath and a look at the GPS; and then we turned back to retrace our steps. Eventually we were at the entrance gates to Aslanlı Yol (Road of Lions), the road that leads up to the mausoleum. The design works. Ten years we had wanted to visit here…and this perfectly straight, paved road lined on each side with lion statues and soldiers forces an intake of breath.

When you’ve felt it so important to visit somewhere for so long, and then you’re finally there, and you’re walking uphill towards it but it’s still out of sight…well, we didn’t expect to feel so emotional. And then we got to the top of the hill and were greeted with this…

Yes, it really does beggar belief how often we travel somewhere only to find it covered in scaffolding, closed to visitors for the day, or there’s a special event going on just for that day. We were expecting a sombre atmosphere – but what we got was excited dancers, kids, teachers doing headcounts on the kids…19 Mayıs Atatürk’ü Anma Gençlik ve Spor Bayramı (Commemoration of Atatürk, Youth & Sports Day) was almost upon us and the youth had descended on Anıtkabir to commemorate it.

No Visit To The Tomb

An official walked over to us to usher us along and explained to us in Turkish that we had around an hour before we had to leave…oh, and the tomb of Atatürk was closed to visitors today, too. Is this a regular thing or a one-off, asks Barry. A one-off. Who would have thought it? Best get cracking then!

The whole site is beautiful in its complete simplicity with the Hall of Honour, which houses the tomb of Atatürk, commanding attention at one end of the ceremonial courtyard.

Standing with your back to the Hall of Honour, you look out across the ceremonial courtyard and through the pillared boundaries of Anıtkabir to the city beyond. Right in the centre is the tombstone of Ismet Inönü, expert negotiator, long-time loyal prime minister and the second president of Turkey following the death of the founder.

Visiting Anıtkabir coincided with my reading of ‘Atatürk’ by Andrew Mango and I was reading a section where Inönü featured heavily. We spent a few minutes here before turning to go into the museum. The architecture of Professor Emin Onat and Professor Ahmet Orhan Arda, the architects responsible for the design of Anıtkabir certainly matches the remit put to them; to design a ‘monumental tomb.’

But A Visit To The Museum

Stand with your back to the tomb of Ismet Inönü and Anıtkabir certainly is monumental. And the museum: We’ll admit to getting a little bit bored in some of the larger museums of Turkey (there’s only so many stone heads in cabinets you can look at in one day), but the museum at Anıtkabir is well worth a few hours of your time.

It’s got context, it’s well laid out, it gives you a real idea of the person, the soldier and the politician that was Mustafa Kemal Atatürk, the people that surrounded him (and that he surrounded himself with), the historic climate – it’s got to be visited.

Eventually, the crowds that greeted us at the top of Aslanlı Yol started to arrive in the courtyard to be led to the tomb. It was time for us to leave. Our first thoughts had been that we were disappointed we couldn’t go inside to the tomb to pay our respects, but then we were in Ankara in the week leading up to Atatürk’ü Anma ve Gençlik ve Spor Bayramı (the Commemoration of Atatürk and National Youth and Sports Day).

Atatürk placed great importance on the youth and their education – the future of the Republic of Turkey is in their hands. Quite apt then that the youth should be able to put pay to our visit on this occasion.

We left Anıtkabir, returning to the city centre along Aslanlı Yol. Time to head back to the station to catch our train that would take us to our friend, hundreds of miles away in the east of Turkey. While our first visit to Anıtkabir wasn’t quite as we’d expected, it didn’t matter. Ankara and Anıtkabir are places we’ll be visiting time and again.