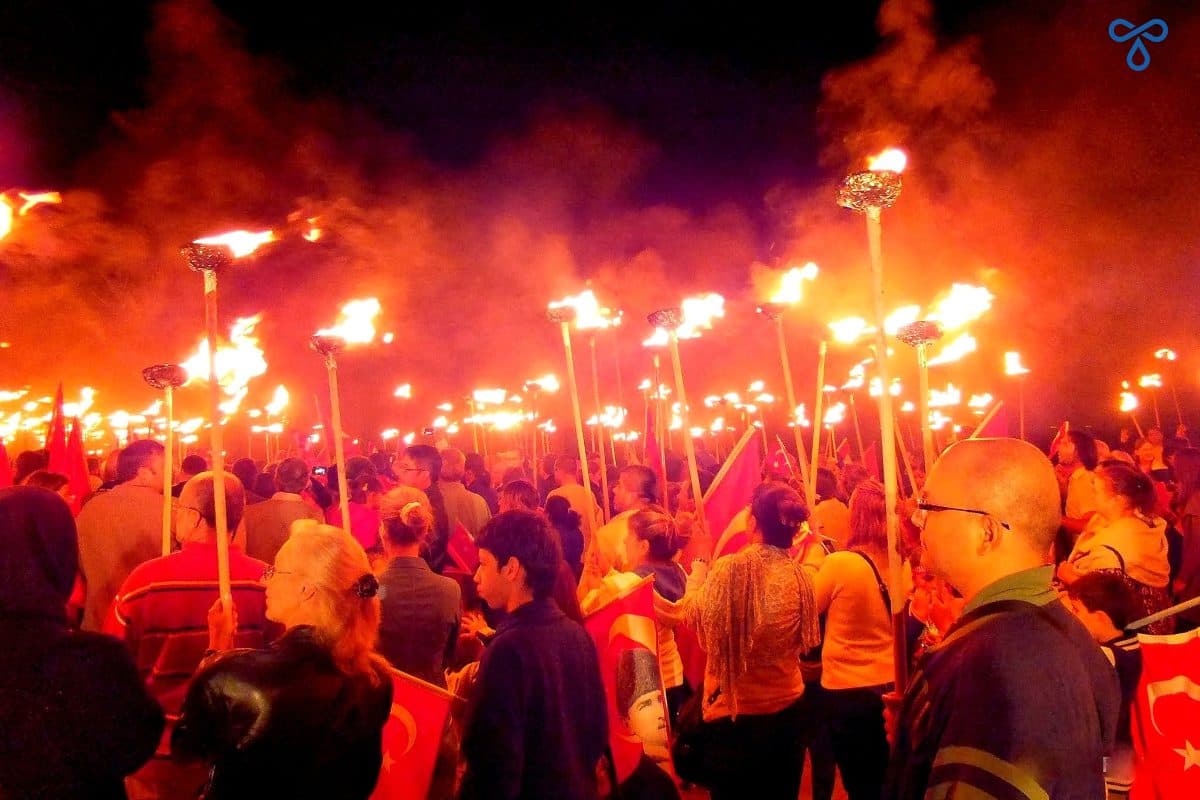 If you know anything about Turkey at all, you’ll know that yesterday was the 90th anniversary of the declaration of the Republic of Turkey (Cumhuriyet Bayramı – Republic Day).

Not that most Turks need much excuse to openly display their national pride, but Cumhuriyet Bayramı is a day of loud and proud unabashed flag waving, singing, chanting.

Once familiar Facebook profile photos of your friends suddenly switch to images of founder of the Turkish Republic, Mustafa Kemal Atatürk – or the moon and crescent of the Turkish flag.

When it’s the same few images floating around, it’s no easy task working out who you’re talking to!

Last year we went up to the site of the Fethiye Tuesday market to take photos of the torch lit procession before everyone set off.

This year, for various reasons, we felt it was important to join the procession…so we did.

The following photos are Fethiye’s celebration of the 90th anniversary of the Turkish Republic through our eyes.

And the start of proceedings was blessed with a ridiculously beautiful sunset.

We see no shortage of of fabulous sunsets in Fethiye but this was the first ‘winter colours’ sunset we’ve had since the hot summer months left us behind.

Everyone was out with their cameras as we walked along the harbour to the meeting point of the procession.

By the time we arrived, it was already dark and the paraffin torches were being handed out to those who wanted one…yes, that’ll be almost everyone.

It didn’t take long for the torches to empty from their racks.

And, after a bit of milling around, the air filled with the aroma of paraffin and a black, night sky became an orange glow as flag-shrouded people went to light their torches and then take their places to begin the walk to Beşkaza Meydanı.

A river of burning torches stretching as far ahead along the kordon as is possible to see, Turkish flags – some with the image of Atatürk – it’s a stirring feeling.

And then something completely different this year.

The belediye brass band were leading the procession but we couldn’t see or hear them; they were too far ahead.

And then we nearly jumped out of our skin as Onuncu Yıl Marşı suddenly blasted out of unseen speakers.

If you’ve ever been to watch Fethiyespor you’ll have this song firmly embedded into your brain.

And for those of you that haven’t heard it, here it is for you (prepare to hum this for the rest of the day). You can even sing along if you like; here are the lyrics.

It’s one of those national songs that’s always guaranteed to get everyone singing along – and everyone did start to sing along – and then we started moving, walking slowly, still singing.

And the flags and the torches continued along the kordon. Old people, kids, babies in prams, parents, teenagers, us – we all moved along to the sound of Onuncu Yıl Marşı.

And it didn’t fade into the distance as we inched away from where we’d begun.

Because, as we passed the restaurants along the harbour, they were blasting out exactly the same song.

All the way along the kordon, the tables and chairs from the restaurants and büfes had been cleared while the procession made its way towards Beşkaza Meydanı.

And once we finally reached the square, we ran up the steps of the culture centre to try and get a better idea of the turnout. Good effort!

As the evening show started a minute’s silence was held, followed by the Turkish National Anthem and three flares were held aloft from the pillars surrounding the statue of Atatürk.

A traditional folk dance opened proceedings – what we could see of it. We live in a world of people holding tablets, phones and cameras aloft to take photos.

That’s not a complaint because we were doing exactly the same thing! We got this fleeting glimpse and gave up.

And then the saz players kicked in and the singing started…and kids stood on chairs…and there was more flag waving.

Well your country doesn’t turn 90 every day, does it?

And wow; look at this! We even got fireworks. Not loads, not spectacular enough to make you oooh-and-ahhh but fireworks all the same.

We’ll take it. (We don’t get many fireworks in Fethiye.)

We stuck around for a while until we’d had our fill of the music and the crowd had started to thin.

As we walked towards the back of the square we laughed at how many people clamber onto the statue of Atatürk.

Things like this are just not the done thing in England – but why not?

And then, well, Turkey’s 90th birthday and all that. We decided to see for ourselves what Atatürk’s view of Beşkaza Meydanı is. Have you ever been up there?

You know when something doesn’t look that high and then when you actually approach it and climb it, you suddenly become aware of its size.

The steps are huge, there are no barriers.

The statue is of Atatürk holding the hand of a little girl – I held their hand, too, to steady myself!

Everyone looked so small down there (this photo is zoomed in a tad and I was being a bit of a wuss, too). Up here is a different world.

It seemed only right to make Fethiye’s Atatürk statue a part of our evening but we didn’t hang around up there for too long.

“Get a photo through the hands,” Barry suggested as he ambled back down the steps. Easier said than done.

That involved me letting go and feeling a bit dizzy about the whole thing. Come on Julia, sort yourself out.

There are kids scrabbling around up here all the time! This photo is the best effort. Even the statue is much bigger than I thought.

A parting shot to complete our Cumhuriyet Bayramı and we made our way back along the kordon to where we’d come from and towards home.

“That was a lot of people in the procession,” said one of the restaurant owners as we passed. “Yeah, great wasn’t it!”