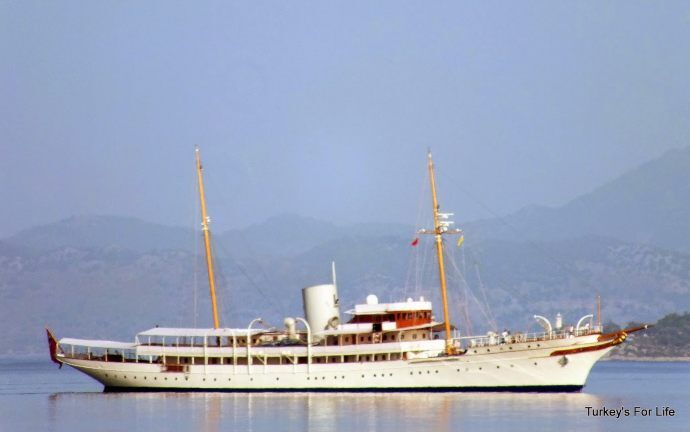 Those of you who have been reading our ramblings on a regular basis over the years will know that we have a minor obsession with vessels of any type that appear in the bay of Fethiye. It doesn’t even have to be a luxury yacht. Tankers, cargo ships, cruise ships…anything. If it’s there, early in the morning, its reflection in the water below, well I can’t help but get my camera out to take a photo.

And so it was that on Friday morning we were greeted with the sight of a vessel that really caught our eye. A steam yacht gliding gracefully over the water and eventually anchoring in front of Şövalye Island. This was definitely one for the camera!

The picture’s not great – I was at full zoom and rushing to catch her before she became a bit obscured by the backdrop of the island – but isn’t she just beautiful? She reminded us both very much of Atatürk’s yacht, Savarona, but we knew it wasn’t that because Atatürk’s yacht has two funnels. And then, in the distance, we thought we could just make out the British flag on the back. Hmm, now we were more curious…

We put the photo on our Turkey’s For Life Facebook page. A couple of people mentioned the resemblance to Atatürk’s yacht – and then someone else commented and told us that this yacht is Nahlin. “She’s one of the last three steam ships and she has a great story to tell”, said the comment. Ohhh, now we’re even more curious…

A Concise (Hi)story Of Nahlin – This is a good one!

Nahlin was one of the last three steam yachts built in the UK and also one of the biggest. She was built in 1929 and launched in 1930 for Lady Annie Henrietta Yule; at the time, the richest woman in Britain. Fast forward to 2014 and Nahlin is now owned by James Dyson; you know, the chap who invented that famous vacuum cleaner and is now doing a good line in groundbreaking fans. Wonder if he was on board on Friday morning?

But what about the bit in between? Well, pull up a chair and we’ll tell you…
Because Nahlin – this boat you can see in the photo above, this boat that graced Fethiye with its presence for a short time on Friday – Nahlin is the yacht that was used by none other than King Edward and his lady, Wallace Simpson, to cruise around Eastern Europe in 1936…while she was still married.

Photographs of the couple on the yacht appeared on the front pages of US newspapers – but none appeared in the British press. The king of England on a yacht with a divorcee…a divorcee who was still married to her second husband – and an American divorcee at that. The scandal. And the king had apparently had all the books removed from the yacht’s library so that there was more room to store the booze! A stop off in Istanbul and the couple were greeted by none other than Mustafa Kemal Atatürk who apparently treated Mrs Simpson as though she was already the wife of the king. Bet that went down well back in Blighty!

And we all know what happened after that, don’t we? That elephant-sized piece of British history were King Edward abdicated ‘to marry the woman I love.’ Will we ever get over it…?

There’s lots of other history Nahlin can share with us, of course – including, now, a visit to Fethiye. You can read more about her past in this Wikipedia article. And thanks to Anıl Boat Kalkan Turkey for commenting on our Facebook Page and alerting us to the history of Nahlin. Much appreciated!