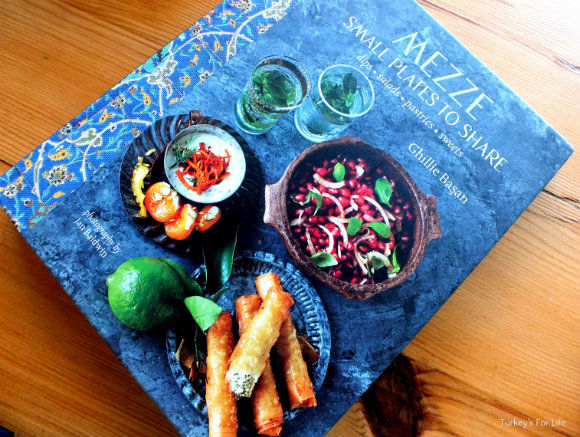 The best food should always carry with it stories and happy memories of life events, travels, chance meetings, making new friends or spending quality time with old friends and family.

In the book, not only does she share classic mezze recipes and her own creations, we are also treated to a personal tale of how mezze came to be so special to Ghillie.

It Started In Ölüdeniz

There are also familiar episodes that we, too, can relate to. The year was 1984 and Ghillie Başan was travelling around Turkey.

After a hot and sweaty journey from the travertines of Pamukkale (no luxuries such as air-conditioned buses in those days), Ghillie found herself in isolated bliss, breathing in the seclusion of the Ölüdeniz lagoon.

Fast forward 30 odd years and the month of July can certainly no longer be associated with splendid isolation when it comes to one of Turkey’s most famous landmarks.

But just picture the scene…

Chilling after a long journey; just you and a flat calm, crystal clear Mediterranean lagoon.

Sand between your toes, pine-clad mountains and rugged coastline…

And then a waiter serves a selection of meze plates just for you.

That was Ghillie Başan’s first ever experience of dining on mezze.

Not surprising that it is forever etched in her memory and easy to see why she fell in love with Turkish and Middle Eastern cuisine.

You might have noticed that ‘mezze’ is written with a double ‘z’ in this review.

That’s because the recipes in this book are influenced not only by Turkish cuisine but also dishes from Middle Eastern countries.

We’re broadening our foodie and geographical horizons with ‘Mezze – Small Plates To Share.’

Some of the dishes are oh-so-happily familiar – with a Ghillie Başan twist – whilst others are fresh and new for us. We can’t wait to start experimenting.

The idea of cookery books filled with exotic recipes from far flung climes can sometimes bring us back down to earth with a bump once we leaf through the pages and are faced with the reality.

A list of ingredients that we have either never heard of or are left wondering where on earth we’re going to be able to buy them from.

‘Mezze – Small Plates To Share,’ could have fallen victim to that.

However, Ghillie Başan has provided readers and those recreating her dishes with kitchen essentials; basic recipe mixes that are added to so many of the mezze creations in this book.

Pastes and spice mixes such as harissa and dukkah.

Have these made and ready to go and you’ll soon be rustling up so many tasty Middle Eastern mezze plates to share with your friends and create your own foodie memories.

So Much To Tempt

And how do you know where to start?

Which mezze plates to make first?

Take your time. Leaf through the pages.

Pour over the photos. Let them tempt you and make your decision for you.

And once you’ve decided which mezze plates you’re going to prepare and cook for your friends, what are you going to serve them with?

Well, Ghillie Başan is a woman after our own hearts. “Mezze without bread is almost unthinkable,” she writes.

You can either go out and buy some or you can follow her recipe for Turkey’s famous pide bread which is in the book.

Because that’s the bread that was served to her on that hot July day in 1984 at the lagoon of Ölüdeniz. The stuff of happy memories…