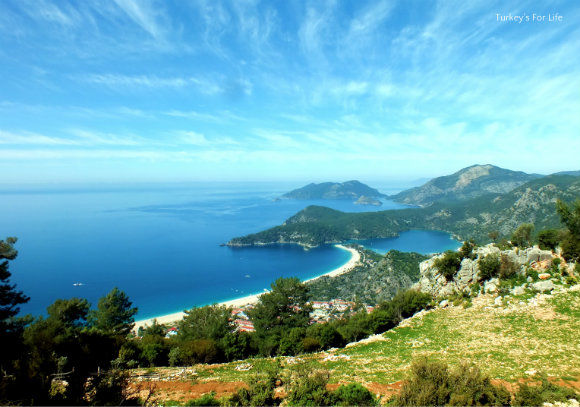 We love this photo. I took it when we walked along the (old) first part of the Lycian Way last March. People who’ve done the paragliding from the top of Babadağ will have seen higher views than this but as you’re never gonna catch me with a parachute strapped to me (or a pilot for that matter), this is as high as I’m going to get until we venture to the top of the mountain itself. Terra firma all the way for me.

Anyway, we’ve been meaning to do a post on the Ovacık to Faralya stretch of the Lycian Way for a while but we’re intending on walking it again soon so we’ll do the post after that just in case anything’s changed.

The reason we’re writing about it today is because we like a bit of trekking (as you may be working out by now) and Britain is very fortunate to have so many walking routes backed up with Ordnance Survey and other walking maps.

These don’t exist in Turkey (except within the military services) so we were stumped until a couple of Turkish friends showed us their local trekking routes a few years ago. These are routes we use on a regular basis now and fortunately, the views are great on all of them so we never get bored of them.

Then, along came the Lycian Way. Kate Clow lives in Antalya and is a major trekking bod. A good few years ago, she and volunteers waymarked the Lycian Way from Ovacık, all the way to Antalya. It was Turkey’s first official long distance trekking route.

It’s altered and grown in popularity since and she has now done other routes in Turkey too:

Closer to home, a new website is being developed so that people, including families with small children, who want to book accommodation or have a guided holiday along the Lycian Way can do. Obviously, you don’t have to do the whole walk in one go (although many have!) and we’ve only ever done little stretches of it. It’s just good to know there are waymarked tracks out there to explore.

If you’re a big Fethiye lover and, here are some ideas to let you explore Fethiye on foot.

You can buy Kate Clow’s Lycian Way guide on Amazon.