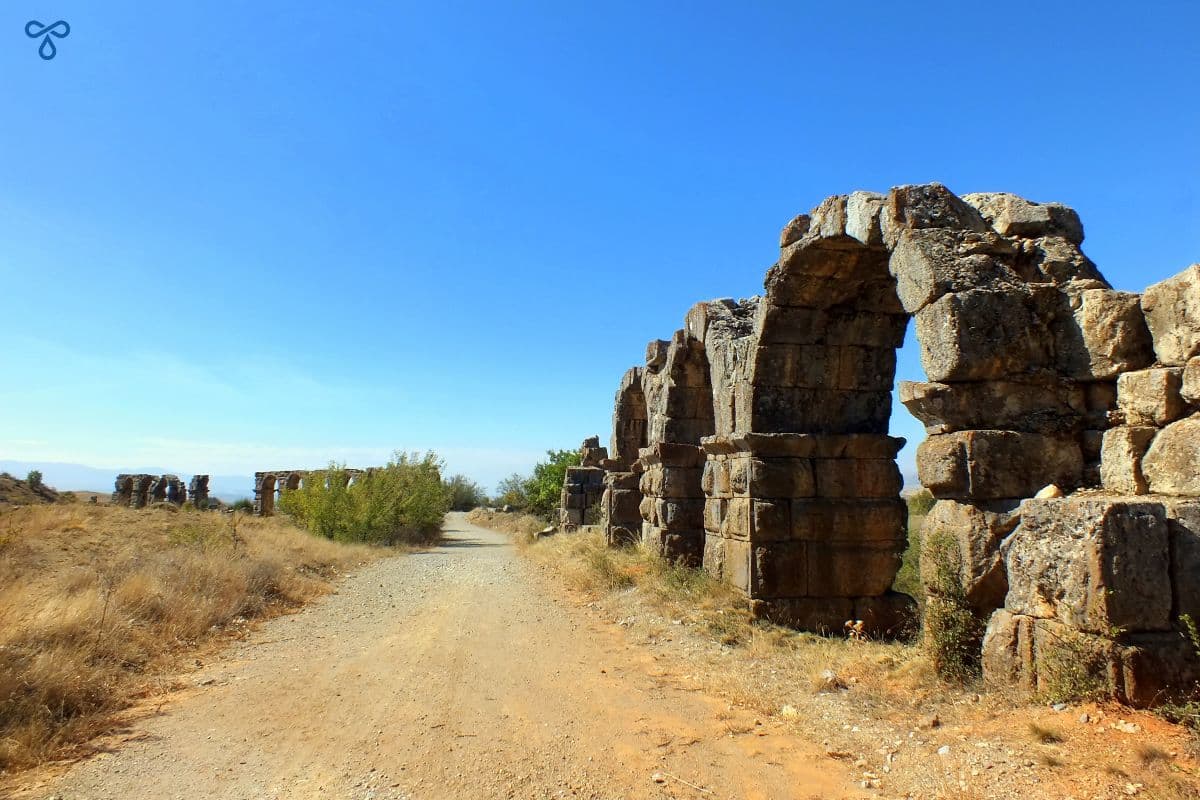 Sitting above the northwest corner of Eğirdir Lake in the Isparta Province of Turkey lie the ruins of Antioch Of Pisidia.

We were in Eğirdir to finally experience the beauty of the vast lake and the mountain scenery. As well as Turkey’s spectacular lakeland scenery, we were also there for the culinary experience – Lake Eğirdir’s famous freshwater fish: carp and göl levreği (lake bass) were on the menu.

Antioch Of Pisidia – A Surprise Bonus

And the Cittaslow town was also our base from where we were to visit ancient Sagalassos. Antioch of Pisidia was a surprise bonus.

Rather than plan a strict itinerary when we go away, we like to have a couple of definite must sees. And then, when we arrive, we’ll read around to see if there’s anything else we’d really like to do.

Whilst working our way through the substantial breakfast at Göl Pension, I read that you can drive around the whole perimeter of the lake, making a couple of stops en route at Antioch of Pisidia and the village of Barla.

That was our day sorted. We wrapped our breakfast pastries – tava böreği and sigara böreği – in paper serviettes to take with us. Then we jumped into the car and set off in an anticlockwise direction…

Very typical of Turkey (it was the same situation for our road trip along Van Lake): the road is in pristine condition, it really hugs the shoreline both at water level and along cliff faces. The views inspire awe. But any opportunities to stop and breathe it all in are very few and far between.

It was only on the way back, along the south shore of the lake, that we got any real opportunity to pull over into a layby and take a few photos.

But anyway, let’s get back to our main stop off during that drive around the lake. We were curious because we’d never heard of Antioch of Pisidia…

The ruins are on the edge of the modern day town of Yalvaç which is surrounded by wild, rolling hillsides and distant mountains. And apples. This whole area is the apple growing capital of Turkey. Be prepared to drive behind lots of trundling apple carts.

We parked along the quiet road just beyond the entrance to the walled site of Antioch. What hits you immediately is the sense of solace. Just myself and Barry ambling along a dusty rubble track. No other people or buildings in site. So we continued to walk for a while…

The Aqueducts & The Trail

And, if you do decide to make the effort to visit Antioch of Pisidia (we recommend), do as we did and continue to follow this track for a while.

Because, eventually, in the distance, you will see the remains of the ancient aqueduct that was used to transport the  water supply to Antioch of Pisidia.

The aqueduct dates back to the 1st Century AD and was 10 kilometres long.

Water was brought from its source, which was 1,465 metres above sea level, to supply the city.

As well as the sight of the aqueduct, there’s reward to treading this track for a while.

You can say you have followed in the footsteps of St. Paul the Apostle. After travelling from Cyprus to preach in Perge, Paul and Barnabas set off northwards and arrived to preach Christianity to the people of Antioch of Pisidia.

The track traverses mountain paths and forest trails between the ruins of Perge in Antalya and Antioch of Pisidia. The track you can see in the photos is part of this very trail.

Inside The City Walls

When you pay your fee (or swipe your MüzeKart) at the entrance to Antioch of Pisidia, before you is not a sight to ‘wow.’

The Western Gate was the main entrance to the city and is also your main entrance, today. It’s also your clue as to how intact Antioch of Pisidia is in the 21st century. Not very.

So why bother making the effort to come here? There are outstanding archaeological sites all over Turkey with structures far more intact than anything you are going to see at Antioch of Pisidia.

St. Paul the Apostle will reappear in our explorations in a short while, but Antioch of Pisidia also holds historical significance as an Asian military and cultural base of Rome.

During the reign of Augustus (31 BC – AD 14), his noble deeds meant that peace came upon the city (pax Romana). The Pisidian cities, which also included Termessos and Sagalassos amongst others, held strategic positions in difficult terrain.

Previous invaders had struggled to keep control of their conquered subjects and the Pisidians were largely left to their own devices.

Antioch of Pisidia became capital of the Pisidian area in 295 AD. In the 21st century, when you witness the splendour of Sagalassos, it takes a lot of imagination to picture what Antioch must have looked like. There’s a substantial Wikipedia article that offers some clues as to what the Augusteum (the temple of Augustus) looked like.

Today, we can climb the steps of the propylon (above) and stand on the site of the temple. This is the highest point of the ancient city of Antioch of Pisidia. And it is thought the building of the temple was begun during the lifetime of Augustus and dedicated to him after his death.

Is it possible to explore an archaeological site in Turkey without seeking out its ancient theatre?

Again, it’s time to jig the imagination into action with the theatre at Antioch of Pisidia. Archaeologists have found that this theatre was originally larger than those at Sagalassos, Termessos and Selge and can be compared to the theatre at Aspendos in the Pamphylia region.

During certain decades of the 20th Century, when Antioch of Pisidia lay abandoned, stones from the theatre were carried away and used for other purposes.

Getting Around Antioch Of Pisidia

There are two main streets at Antioch of Pisidia where you can really transport yourself back to the Roman age.

As you wander between the theatre, the temple and the churches, you can walk along the ancient Decumenus Maximus and the Cardo Maximus. Here, you can see ridges in the paving where the carts wore away the stones.

As you wander and take in the scenery, you can also keep an eye out for details at Antioch of Pisidia, as in the pillar above.

Archaeologists are, thankfully, once more carrying out research and digs at the site so we should know more about the former capital of Pisidia in the future.

Seat Of The Bishops

Antioch of Pisidia was also the Seat of the Bishops. We’re in the 4th Century AD now. And that’s the era where evidence of churches in the area comes from. It is also one of the city’s most prominent eras.

And we did say archaeological excavations at Antioch of Pisidia are once more taking place. On the day we visited, work was underway at what is known as the Great Basilica or St. Paul’s Basilica.

On the day we visited, the archaeological team were sat eating lunch. Just a small sign of ‘Giriş Yasak’ (Entrance is forbidden) told us not to enter – not that we would anyway.

First excavated in 1924, it became buried again until archaeologist and director of the nearby Yalvaç Museum, Mehmet Taşlıalan, rediscovered it 80 years later. Today’s archaeological team is headed by Professor Mehmet Özhanlı of Süleyman Demirel University in Isparta.

The Great Basilica is significant because it is also known as St. Paul’s Basilica. It dates back to the late 4th Century AD and was one of the largest churches in the world.

The current team also discovered another church in 2016, taking the count to four. It is thought there may be more churches yet to be unearthed.

Make Time For Antioch Of Pisidia

Chances are, when it comes to the archaeological sites of Turkey, Antioch of Pisidia is going to be pretty low down on your ‘must visit’ list – if it’s even there at all.

But there’s something enchanting about this site. Its historic significance, its spectacular geographical location, its mystery. There’s still so much buried underground here, waiting to see the light of day once again and reveal its secrets so that archaeologists can piece together its story.

Its solitude. Particularly if you visit in the shoulder seasons, there’s a good chance you will have this site all to yourself. If the mass of visitors at Turkey’s more well known archaeological sites don’t do it for you, head on to Antioch of Pisidia…