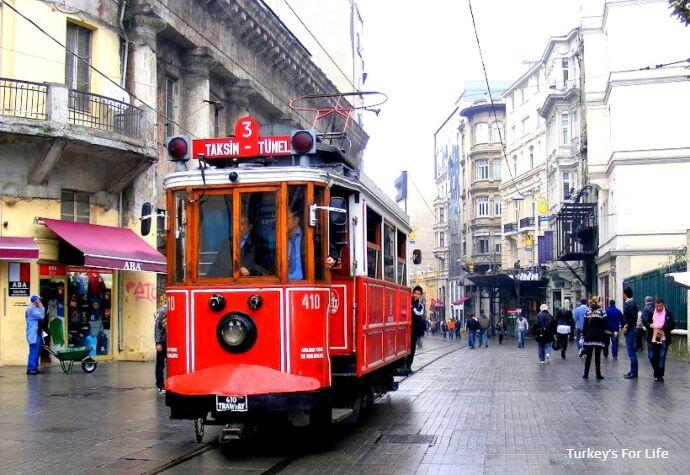 Apologies for the cliche but the Beyoğlu area of Istanbul really is a feast for the senses. It’s a tourist’s must.

And then of course, there’s the astounding Istiklal Caddesi (that’s another post) from which all these nooks and crannies hide themselves.

As far as we’re concerned, the best way to explore Beyoğlu is on foot.

Many of the streets are pedestrianised anyway and some are not even wide enough to fit a vehicle the width of a car down them.

However, if walking isn’t your thing, you can also have a play around on the public transport of the area.

It’s a case of nostalgia and necessity for the transport available to you.

Istiklal Caddesi is a (roughly) 2km pedestrianised stretch of stunning 19th Century European architecture that begins at Taksim Square and ends around Tünel.

There is one vehicle that is permitted to run along this amazing avenue and that’s the historic Taksim – Tünel tram.

We’ve only used this tram once as it’s always packed. And, well, you just can’t beat a good old aimless amble and an about turn down a side street or passage should the fancy take you.

But, if all you want to do along Istiklal is view the grand buildings (or be able to say you went on the famous tram), then it’s a good idea.

Trust me, it is NOT going to go too fast for you.

There will be ample time to marvel at the architecture – and marvel at just how many people can squish up and down one street!

The tram continuously crawls up and down the avenue, ringing its bell in warning to oncoming pedestrians and photo-taking tourists who risk life and limb trying to get a head-on shot.

Yes, I’ve been one of them on numerous occasions. And I will be again – I’m still not happy with the pics I’ve got!

Somehow (I have no idea how) the tram and pedestrians of Istiklal Caddesi co-exist successfully.

Nobody rushes to get out of the path of the tram – there’s often nowhere else for them to go at that moment – and the tram doesn’t hurtle along terrifying all.

It’s a tolerant sharing of a tight space and, for us, Istiklal Caddesi wouldn’t be the same without it.

I’m going to do a continuation of the journey through Beyoğlu by public transport in our next article.

Continue your journey by jumping on the Tünel funicular!