While the historic tram that trundles up and down Istiklal Caddesi all day long may be one of the little pieces of nostalgia that make up Beyoğlu (and a free ride for the kids who cling to the back of it), for us, the Tünel funicular is an absolute necessity. Walking down the hill towards Karaköy and the Golden Horn is fine – the street takes you past the Mevlana museum and loads of little musical instrument shops. But, if you want to come back up, either do some calf stretches and get your hiking gear on (okay, I’m exaggerating slightly…but it is steep!) or jump on the underground funicular for the price of a lira and you’ll be back on Istiklal in no time. 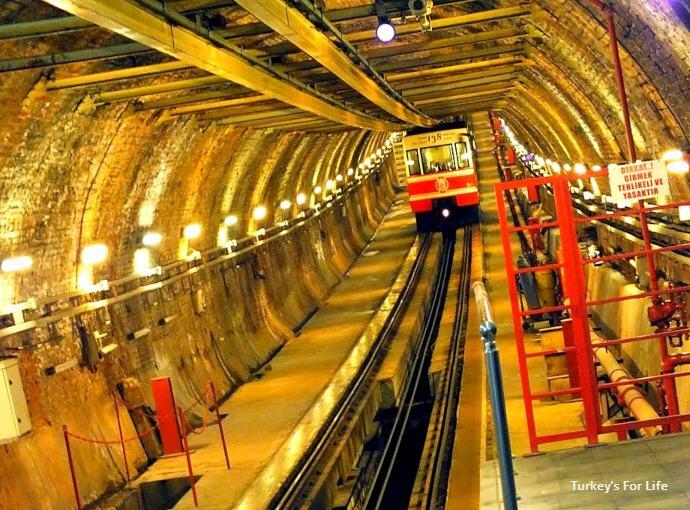 Watching the funicular make its way down the steep slope

Yesterday, I said there was a claim to fame for this service. I’ve read in the past that this is the oldest underground in the world. However, the book from where I gained my information has since had a new edition printed and there is now no mention whatsoever of the age of the funicular line. Hmm. I’ve done a quick search and it opened in 1875 so let’s just call it pretty old and leave the claim to fame alone.

Apart from the fact that it saves us heaving ourselves up a steep, narrow street, we really like using the Tünel. As public transport goes, it’s a pleasant experience because the stations at either end of the line are pristinely clean. Even if you don’t intend using the train, it’s worth bobbing your head inside just to have a nosey at the tile work. The Karaköy end, in particular, has a few murals of historical Istanbul scenes that have kept us occupied while we’ve been waiting for the carriage to arrive. 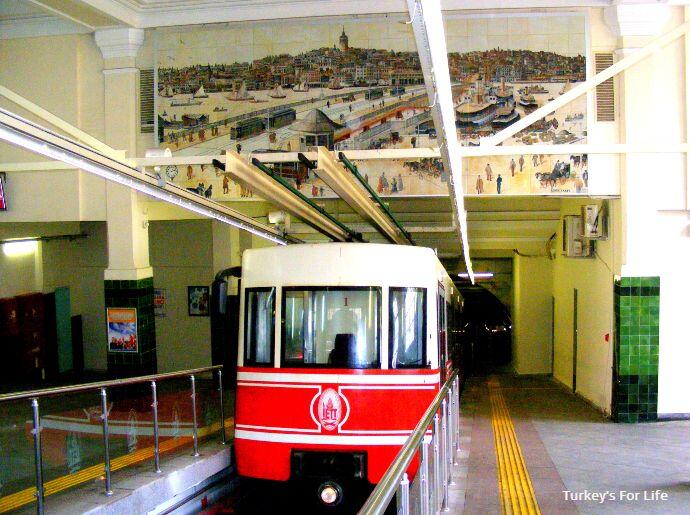 The funicular waiting at the Tünel end of the line

The entrances at either end however, could not be more different. The Tünel end of the line has a grand old ornate entrance that matches the other buildings of the area but if you’re coming from Karaköy…Well, cross the street from Galata Bridge, pass rows of shops selling toilet seats and spanners (and the like!) and look to the opposite side of the road towards a tall, nondescript 1970s-type building. In not very noticeable gold-coloured lettering, it says Tünel. And just as you think you’re heading into a dank underground system, you’re presented with clean, bright, historical Tünel station. Don’t you just love Istanbul?

The journey from Tünel to Karaköy takes less than 2 minutes.

Oh how I want to go to Istanbul.

Istanbul should be top of everyone's list of places to visit Anca. :)

I've never been to Istanbul, but reading your great posts about it has definitely made me put it on our list of places to visit. To show how much we've been enjoying your posts, we have a blog award for you if you would like to stop by our site when you have a moment :-)