One of our readers contacted us as she wanted to know if we had a Turkish Musakka recipe so that she could make it herself at home.

Well, we get lots of emails like that, actually.

But this particular reader told us she had especially enjoyed the Turkish musakka.

We regularly order Turkish musakka from the steaming bain maries of traditional lokantas. Like Seçkin Restaurant near the Otogar (bus station).

It’s classic lokanta food. And so, when we first moved here, we’d never thought of making it at home before.

This email request changed all that. And thanks to this, we had a bash.

It was a big success. So it’s now a regular dish on our table.

The advantage of attempting to make something you have enjoyed in the past? You have a good idea of what it should look and taste like.

I skimmed the internet and scanned various musakka recipes from Turkey to get the general gist.

And then cooked it until it resembled what we have seen in the lokantas of Fethiye.

After a bit of discussion, and a few years of playing around with different methods, here’s how we now cook Turkish musakka.

How To Make Turkish Musakka

Where would we be without the aubergine, eh? Such an integral part of Turkish cuisine.

From vegetarian meze dishes like the summery aubergine salad.

We have a whole list of classic Turkish aubergine recipes.

Turkish musakka is neither winter nor summer. It works year round.

And, depending on how you serve it, you can make it summery or cosy warm for winter.

Traditionally, to make Turkish musakka, you’re supposed to begin by frying your sliced aubergines in batches.

Whenever a recipe calls for frying sliced aubergines for a dish, we lay them on an oven tray instead and give them a light drizzle of olive oil.

Not only is this much easier than using a frying pan, it’s also much lighter.

And, when you fry them, you’ll find you might need to add more oil to the pan at intervals.

You’ll then need to lay them on kitchen paper to soak up excess oil afterwards.

None of that needed with the baking method.

Whilst our aubergines are baking, it’s also easier to get on with preparing the rest of the Turkish musakka recipe.

This is an easy and standard mince meat in tomato mixture:

Our spices vary. But they always include kekik (thyme and oregano mix) and sweet paprika for a rich redness.

In winter, for that extra bit of ‘comfort,’ we also add a tiny amount of cinnamon.

Obviously, a good pinch of salt and ground black pepper goes in there, too.

We like to get two meals out of our Turkish musakka. So we oven bake it in two separate oven dishes.

Again, this is where we have come to differ slightly over the years to the traditional way of making Turkish musakka.

The meat mixture and your aubergines are usually cooked in a shallow pan on the hob with a cup of hot water poured over the top.

We lay our aubergine slices in our oven dishes and divide the meat mixture between the two bowls.

Once cool, one of them goes in the fridge for the following day. The other is placed to one side until we’re ready to eat.

When we’re ready to eat, the oven is preheated to 200 degrees Celsius.

We pour a cup of boiling water over our musakka (this loosens the sauce). And then we bake in the oven until it’s fully heated through and the sauce is bubbling.

In Turkey, unlike the UK, meals like this don’t get served all on one big plate. Serve your musakka up on a plate or in a bowl.

In a separate bowl, Turks will often have a portion of rice pilaf or bulgur pilaf.

There might be other seasonal dishes such as okra in olive oil or fresh green beans in olive oil and tomato sauce.

There’s certain to be a yoghurt dish such as refreshing cacık. And, of course, there’ll be oodles of fresh Turkish bread to be torn and dipped!

However you choose to serve your Turkish musakka, we’re sure you’ll love it as much as we do! 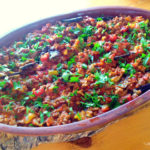 Turkish Musakka Recipe – A Dish For All Seasons

And that’s how we make Turkish musakka.

As we said above, we get four servings out of this recipe because we eat it just as it is – 2 servings from each oven dish.

If you’re serving your musakka with other accompaniments, however, you can easily use this recipe for a dinner party. Then you could serve it to around eight people.

(If you love to cook, take a look at our other Turkish recipes to make at home.)

Think I read somewhere that the bitterness has been bred out of Aubergines so no need to salt them anymore.

Hi Andy, yeah, chef James Martin always says this, too. We haven't salted our aubergines for a few years, now. This musakka recipe doesn't need you to salt them. :)

Looks great! Made me hungry!!!1

Aubergines and minced meat together in Turkish musakka - perfect combination, April. :) So easy to make, too.

Anna, think we'll be cooking this a lot! :)Anonymous, we used to follow recipes religiously and did all the salting. Maybe it's just an excuse for being a bit lazy in the kitchen but we tried without the salting and we really couldn't tell the difference (but we do use a lot of spices in our cooking,)Connie and Cardamom Hills - easy to do and we weren't disappointed with the result!