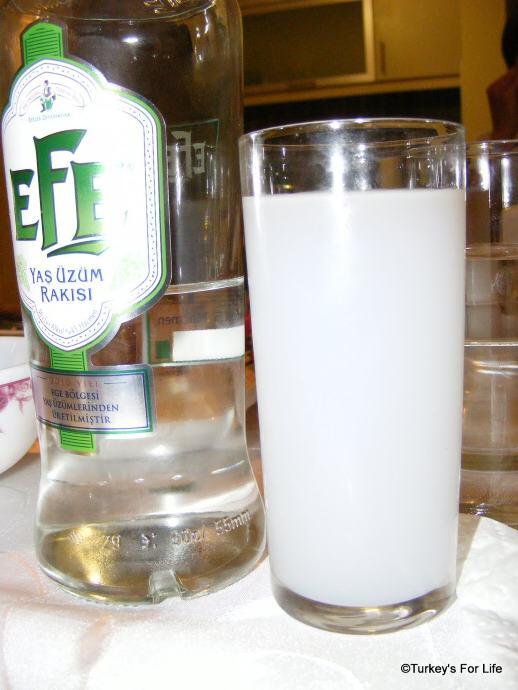 Rakı: a Turkish institution; the chosen tipple of millions of Turks; sampled by many foreign visitors to Turkey (with varying degrees of success); a clear, 40-45% proof aniseed-flavoured alcoholic drink; transforms into a cloudy, milky-white liquid when water is added; known to many as ‘lion’s milk’; known to us as ‘loopy juice!’

I’ve never been a huge fan of rakı and, in the past, only had the odd taste of other people’s. I like aniseed flavours…maybe it’s the fear of the rakı-fuelled drunken stupor (we’ve seen our fair share of those over the years!) I might find myself in if I dare to drink more.

In the past, friends who came out from England to visit us insisted on drinking it and, in true holiday fashion, used it as a chaser to their Efes Pilsen, ending up in the aforementioned stupor, not to be seen again till early evening of the following day.

Our observations on rakı have come up in conversation recently with a Turkish friend and this prompted her to take action. ‘Right, we’re having a rakı night at my house. Rakı is a drink that should be taken with fish, meze dishes, cheeses. It should be sipped throughout the night while chatting with friends. You’ll like rakı if you drink it like this.’ Last night, the rakı evening occurred.

We went along with a generous wedge of our recently acquired Kars Gravyer Peynir and a bottle of rakı. Other friends supplied even more rakı and our hosts served up barbecued seabream and a table packed with cold meze dishes, salads and cheeses. We ate, we sat, we chatted…we drank rakı. And I can now say that rakı most certainly compliments the food that was served – if you don’t drink too much, that is.

Eventually, dinner plates disappeared from the table and we were left with rakı, bottles of water to top up our glasses, bowls of ice for those who wanted to add ice to their drinks, mezes and a variety of cheeses. I finished my first ever full glass of a famous Turkish national drink – and it was immediately replenished.

I mentioned that one glass was quite an achievement on my part and maybe another glass wasn’t such a good idea. ‘No, it’s all about carrying on. We all sit and chat. Rakı makes you feel full, that’s all.’ At this point, our friend got up, sliced some apples and sprinkled them with Turkish coffee. ‘This takes away the feeling of being full so you can carry on.’

Whether this worked or not, we’re not sure, but it actually tasted really refreshing. I took my camera out to get a photo – everyone’s used to us now; taking photos for the blog all the time. I managed to get the photo above before this happened…

Make it look pretty for the blog, they said! Goat’s cheese, olives and cherry tomatoes were placed on top of Turkish coffee-covered apple slices. I suspect some of us had gone through more than one glass of rakı…