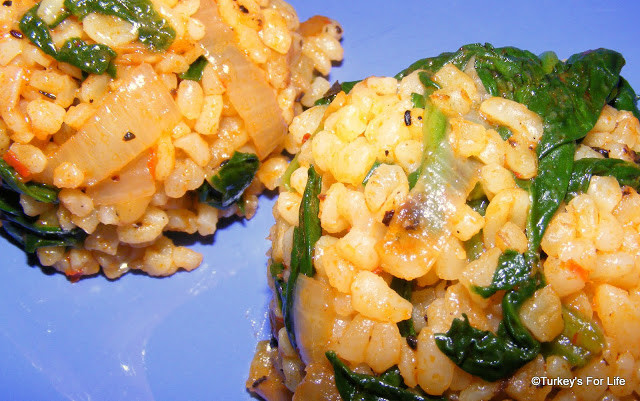 Last Sunday, we were on our way to Çalış market and we were feeling the need for food – right now!

Most of the time, we opt for gözleme because we can eat this at the pazar – but last week, we just had the taste for kuşbaşılı pide.

When the pide arrived, not only was it just what we were looking for, but the restaurant owner’s wife had been cooking for the family. Lucky us!

Along with the pide came a side plate of bulgur wheat and spinach.

In the past, we would have gratefully accepted this little added freebie extra and eaten it without too much thought about what the dish was.

We’d discuss ingredients but then they would disappear somewhere into the depths of my brain.

These days however, we write a blog and Turkish recipes are very much a part of the blog.

Anything new that appears on our table is forked through, discussed and kept to the forefront of my brain.

The bulgur wheat and spinach was really spicy and tasty and an interesting alternative to the regular bulgur recipe we have become familiar with.

Also, it had been given to us just out of niceness and hospitality – which made the dish extra tasty – and so we had a go at making our own when we got home.

To cook the bulgur:

Add the bulgur wheat to the spinach and pepper paste and mix everything together.

Serve the ıslanaklı bulgur as a side to baked or grilled meats. We had it with roasted chicken thighs and big dollop of süzme yoghurt. It’s lovely!

Confession time! This recipe says to use half a kilo of spinach, which is closer to what we ate in the restaurant.

In the photos, there is only 250g of spinach because we had eaten some the day before when I made ıspanaklı yumurta again. That dish really is a delight!