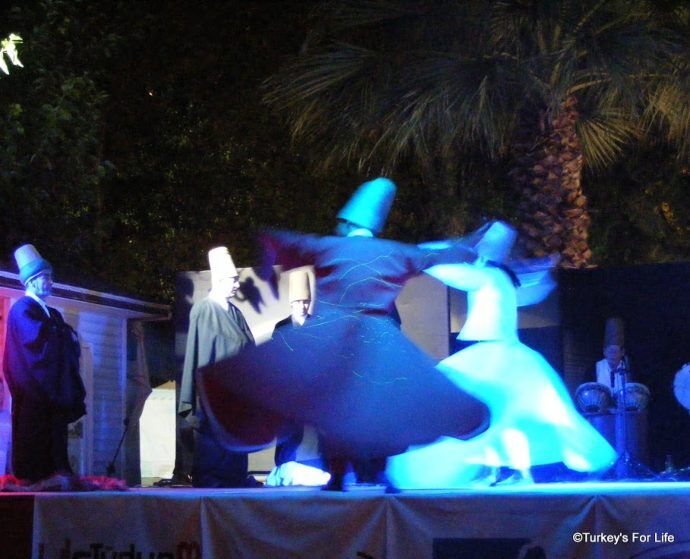 We’re halfway through the Muslim holy month of Ramazan and, in Fethiye, the council (belediye) have organised free evening entertainment for each day of this special month. Last night, the crowds – including us – gathered early, knowing the open-air stage was about to be graced with members of Turkey’s Konya Mevlevi Order; better known to those in the West as Whirling Dervishes.

We attended a sema ritual (the Whirling Dervish performance) at the Galata Mevlevi Monastery in Istanbul a few years ago and it’s a beautiful memory that will stay with us forever. Obviously, it’s impossible to compare the circumstances and the atmosphere of an intimate sema ritual in Istanbul and a sema ritual performed on an outdoor stage in Fethiye – but we’re privileged to have been able to witness this mesmerising scene for a second time in our lives.

After we attended the Mevlevi sema ritual in Istanbul, we became interested in Sufi music – we now listen to it quite regularly – so we were as excited about the pre-ritual musical performance as we were about the actual whirling. The musician playing the reed flute (this is called a ney and the sound represents the breath of Allah) began with a haunting solo before the remaining musicians and vocalist joined him.

Applause was allowed after each song last night. This was a bit of a relief because it was difficult to contain ourselves in Istanbul where we were specifically requested not to clap at the end of each section as it was a religious ceremony. It’s amazing how frustrating that can be when you’ve enjoyed a musical performance so much and you want to applaud someone’s talent.

It was only as the musicians left the stage last night that we were asked not to applaud and not to use flash photography. The Sema Ritual was about to begin.

The sheikh and the musicians, this time in their symbolic clothing for the ritual, re-entered the stage. As the music began and the sheikh took to his red sheepskin rug, the black-cloaked semazen (the Whirling Dervishes) entered the stage, one at a time and took their places.

Rising from their knees, the semazen walked round in circles, exchanging greetings with the sheikh as they passed. Afterwards, their black cloaks were dropped, revealing their flowing skirts. This action symbolises the revelation of truth, the flowing skirt represents the shroud of the ego and the crossing of the arms symbolises the unity of Allah. And then, one at a time, each semazen began to rotate with the music, in a state of trance.

Conical hats, symbolising the tomb of the ego, were slightly tilted to one side as they were spinning round the stage, arms aloft, right palm facing upwards to allow the divine energy to enter. The left palm faces down to allow the energy to pass through and enter the earth.

After the whirling ceased, cloaks were once again worn and the semazen bowed heads, representing a return to a state of subservience.

If you visit Turkey and you’re interested in attending a sema ritual, then you might be lucky and catch a display similar to the one we witnessed last night in Fethiye. This was still a wonderful spectacle but if you want to really take all in, sit in silence and be mesmerised by a beautiful ceremony that climaxes with the whirling of the members of the Mevlevi order, then do your homework and make sure you’re in Istanbul on performance dates.

Alternatively, you can be very organised and attempt to arrange a stay in Konya (the spiritual home of the Mevlevi) around 17th December. This date celebrates the birth of Mevlana Celaleddin-i Rumi, founder of the Mevlevi Order and is the only time the dervishes are in residence in Konya.