If you’ve read our article about the health benefits of okra, you’ll know it was those health benefits, coupled with a Turkish dish served to us by our friend’s mum, that forced us to give okra recipes one last shot before the vegetable defeated us altogether.

Okra in olive oil (zeytinyağlı bamya) is that dish.

Okra Can Be Enjoyable

Of course, those of you who know us, will know we’re also a bit stubborn, too, when it comes to learning to love previously scorned foods.

Brussels sprouts, cauliflower – we’re conquering them all; much of it thanks to experimenting with different Turkish recipes.

And, as for okra recipes, it’s this classic Turkish way of cooking it that has made bamya (the Turkish word for okra) very palatable – nay, enjoyable!

The okra dish we were given at our Turkish friend’s house was so tasty and – most importantly – there was no evidence of the gluey mucilage (slime) that had put us both off delving into subsequent okra recipes after our previous slimy failure with an Indian dish.

We’re still on the lookout of for other non-slimy okra recipes but this Turkish one will more than suffice for now. We love it!

In Turkish cuisine, there’s a group of dishes known as zeytinyağlı yemekleri (olive oil dishes) and our friend’s mum had done a Turkish okra recipe, using this method.

These dishes are a lot lighter than they might sound – just lovely in summer.

Other Turkish olive oil recipes we’ve done in the past are a borlotti bean recipe, barbunya pilaki, and also green beans cooked in olive oil.

If we’re eating seasonally, why not add an okra recipe to the list, too?

Okra Recipes: What To Look For When Buying Okra

It’s always the case, isn’t it, when you’re buying fruit and vegetables that you’re not so familiar with? How do you know if you’re picking up decent quality stuff?

We’ve picked up a few duds in our time when it comes to first time market purchases.

But we’re pretty confident, these days, that, when we’re doing okra recipes, we know what we’re looking for:

Basically, we’re looking for the youngsters.

In the summer months in Fethiye the fruit and vegetable markets are abundant with piles of okra and the pods are in peak condition – so this is the perfect time to experiment with okra recipes.

But what about the slime we’d encountered previously and keep mentioning, now? That was what had really put us off okra in the first place!

Okra Tip: The mucilage in okra is what holds many of this vegetable’s valuable health benefits so we don’t want to get rid of it. The trick is to leave them whole. Slice their stalks off but leave their ‘lid’ on so the mucilage doesn’t seep into your meal.

Let’s make okra in olive oil (zeytinyağlı bamya) without getting the mucilage in our sauce. 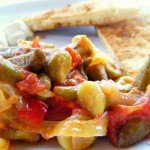 This delicious okra and tomato stew recipe is eaten around the Mediterranean and the Middle East, too. In Turkey, it is served at room temperature.

If you want to make large batches and have a stash of it, it can be frozen, once cooled.

You can serve zeytinyağlı bamya (okra in olive oil) on its own as a meal or with Turkish rice pilaf.

As you can see in the photo above, we love it as a light lunch. We lightly toast some bazlama bread and then rub a clove of garlic over it.

A lovely big dollop of süzme yoghurt, a couple of spoonfuls of okra in olive oil…more seasonal foodie bliss, and it’s healthy, too!

Okra recipes; the Turkish version: This Turkish okra recipe is a great way to cook okra because the goodness in the mucilage is preserved if the okra is cooked over a low heat – exactly the way it is cooked in this recipe.

We definitely rediscovered bamya through this Turkish dish. And, because we also know how healthy it is, we’ll be making the most of the next few weeks of okra season.

There’s something very satisfying about indulging in really tasty food whilst knowing it should be doing you some good at the same time.