For us, the most exciting part of being in Istanbul is the food; mainly the street food. Last year, we couldn’t keep away from the deep-fried hamsi at Karaköy fish market, returning on numerous occasions over the few days we were there. When we were back in Fethiye, we drooled at the very thought of hamsi ekmek, so much so that Karaköy fısh market was the first place we headed to when we arrived in Istanbul last month.

But while hamsi ekmek (oh, and mustn’t forget the famous Taksim ıslak hamburger) were our best Istanbul 2010 foodie memories, Istanbul 2011 has certainly not disappointed. We have returned to Fethiye with a new street food memory that gushes with just as much drool factor; the tantuni kebab. 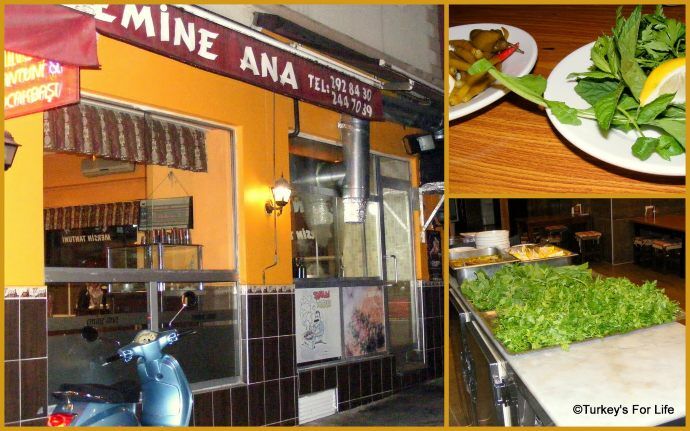 Emine Ana is a popular tantuni place in Istanbul

While mulling our options of what we were going to eat one evening, we were wandering aimlessly around the side streets of Beyoğlu and all of a sudden, there it was: Emine Ana – Mersin Tantuni Kebab.

We’ve read so much about the tantuni kebab over the last couple of years – it appears Mersin tantuni is the new black – and had been itching to try one. Happening upon this place was surely meant to be? Well, we decided that was the case and went inside.

The unexpected aroma of freshly chopped mint hit us as soon as we opened the door and we perched on little stools, the only customers in the building.

It may have said tantuni on the sign outside, but was it going to be a tasty tantuni? As we were thinking this, a plate of mint, rocket, parsley and lemon was placed on the table followed by pickled chillies (turşu). A good start! 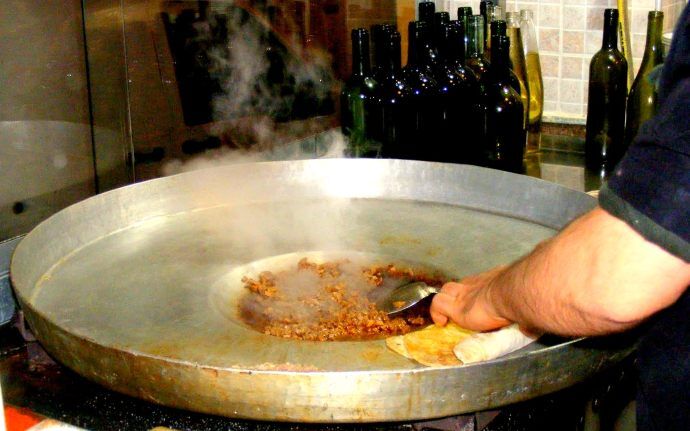 The guy stood over us, waiting expectantly. We needed to speak.

‘Errrm, tantuni?’ I tried to sound confident and knowledgeable but my questioning tone obviously gave me away. I didn’t have a clue what I was asking for.
‘Dürüm? Yarım?’
Brilliant. We’d asked for the right thing and now we just had to decide between dürüm (a wrap) or yarım (a half bread). No competition when we’ve got rumbling tummies to quieten. Yarım it was…

Tiny chunks and strips of previously cooked beef that had been waiting to one side of the huge, circular pan were scooped into a gravy-filled pit in the centre and swirled around in the sizzling juices. Meanwhile, our bread was sliced through the middle and pressed around the edges of the metal plate, soaking up stray juices. 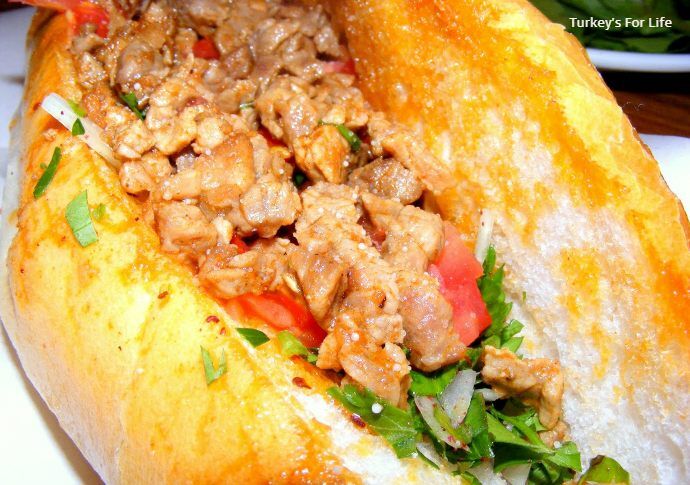 Looks great but our tantuni half bread needs some additions

Within minutes, our tantuni kebab was presented open, wrapped loosely at the bottom in paper. The paper proved very useful. Nothing dry about this sandwich. Before we delved in, leaves were added, cumin was sprinkled and chillies were strategically placed along the top of the beefy filling. 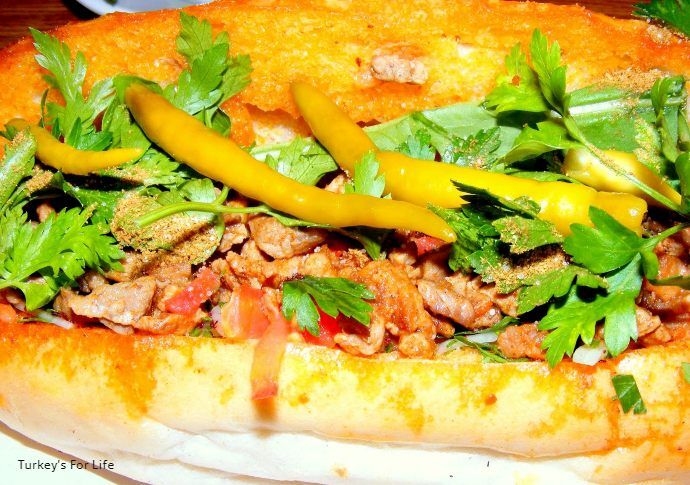 The paper was carefully reapplied to the bottom of our sandwiches, we picked them up, and we simultaneously bit into our first ever tantuni kebabs. A momentous moment!

Tender, juicy pieces of beefy goodness melting on the tongue; warm, soft, gravy-soaked bread; crispy salad leaves with peppery rocket flavours partying with the zing of the mint…and then the hot pickled chillies.

No need to speak to each other. Eyes, eyebrows and nods said it all. We’ve devoured some decent kebabs in our time, but this…

We returned to Emine Ana for more tantuni kebab the night after!

@ Simcha: We'd never had tantuni kebab before but it's a definite favourite now. Can't wait to try it again. Yeah, we love Istanbul, too.

@ Taste of Beirut: We love going up to Istanbul. Always something new - like this place - to find. :)

@ Jenny: If you're ever in Istanbul, definitely add this to your list. Tantuni kebab is amazing! :)

Looks so delicious. Finding these places is so hard when you're a tourist- it's great that you are doing the exploring for us. Another place to add to the list!

Loved Istanbul and the entire experience of being in Turkey!