A little over 8 years ago, we were taken on a road trip to the Datça Peninsula for a short break with friends. It was November and Datça was deserted and beautiful. Just about everywhere we visited was closed up for the winter months, but we didn’t mind as we were there to chill out for a few days and enjoy the solitude.

One place our friend was keen to show us was Palamutbükü. ‘You’ll love it,’ he said. ‘It’s perfect.’ Off we went along the winding roads and rubble tracks on the peninsula, and eventually we arrived at a golden, shingle beach. The sea was a cold, clear blue and all that broke the expanse of open water was a lonely islet sitting just offshore. Our memory of this place is that, apart from a large wooden stand (remarkably, it was open for business – serving both instant & Turkish coffee) there was nothing else along this little stretch of shore in Palamutbükü. 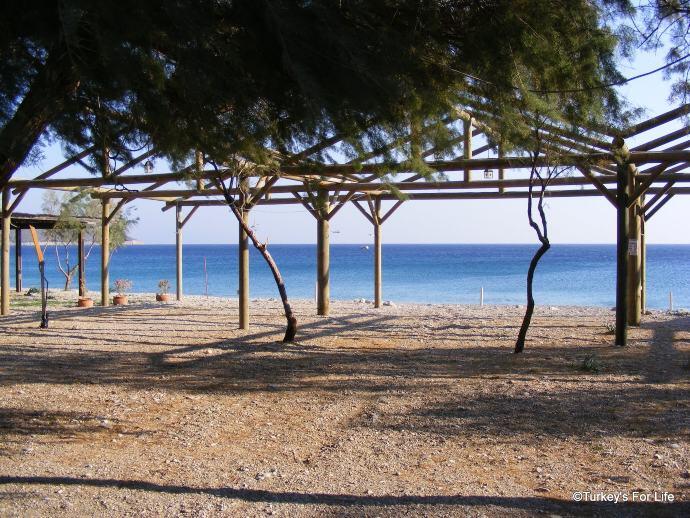 8 years later, again in November, we stayed with friends in the lovely village of Yazıköy which we soon discovered was just inland from its nearest stretch of beach, Palamutbükü. On arrival, we headed straight down there and we were curious to see how much had changed in our 8 year absence.

Thankfully, not too much. Aside from the odd couple taking a stroll, the place was deserted. The sea was still a crystal clear blue, lapping gently against the same golden shingle. We weren’t fooled. The sea here is famous for being ‘refreshing’ even in the height of summer. Timber frames, complete with ‘Wireless Internet’ signs nailed into posts, a short row of low-rise, beachside restaurants, one 2-storey hotel and a few wooden chalets set in their own grounds were the clues that told us Palamutbükü is definitely on the Turkish beach lovers’ radar during the summer months. 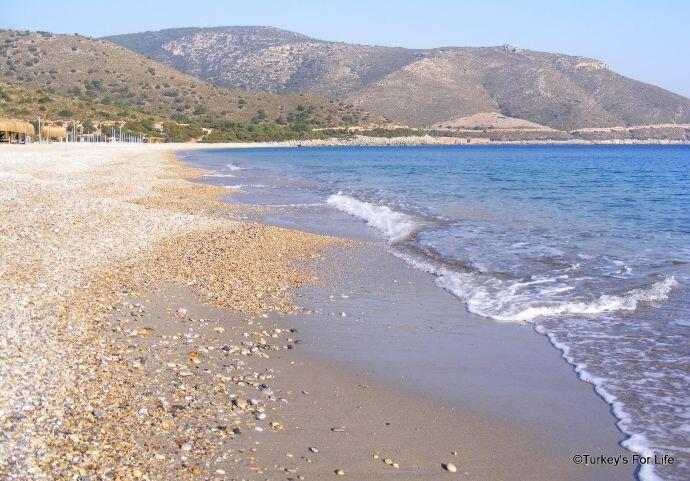 Palamutbkü – the very essence of tranquility out of season

But that was about it. We were pleasantly surprised. All along the Turkish coastline, large sections of previously undeveloped land have given way to holiday resorts, villas and apartments, so we were expecting much the same fate for Palamutbükü. Sometimes, it’s great to be wrong and have that guilty pleasure of feeling like you have a place all to yourself.

The Datça Peninsula is a treat. Somebody somewhere is keeping a tight grip on the ‘no over-development here, thank you,’ approach and, for now at least, the place is packed with secluded bays, some backed by old, seaside hamlets. The almond and olive harvest is still a feature of village life and the ancient, Hellenistic ruins of Knidos – albeit more accessible after substantial road improvements – still stand lonely, exposed and windswept – and are the more beautiful for it.

We really hope it’s not another 8 years before we’re once more exploring the Datça Peninsula – and we’re also really hoping that when we do get the chance to return, the landscape will be just as we remember it now.

@ London Caller: Yeah, we reckon 3 months might just about cover it. You considering it? Finland's a great option for us! ;)

@ Christy: Perfectly peaceful and I fear we take it for granted sometimes, despite appreciating it so much.

It's always nice when you find those gems that aren't over-developed. :) Looks very peaceful here!

Hmm... 3 months should be enough for the peninsula, right? ;)

You should go to Finland in winter. You'll love it!

@ London Caller: We'd like to spend more time around the whole peninsula. It's a very pretty place. Hope you enjoyed Finland. :)

Ahh, that's the kind of place I would like to spend my entire summer!

Sorry for the delay.Just got back from Finland last night.