The first time we came across biber dolması (Turkish stuffed peppers), we were staying with a Turkish friend and his family for a few days.

Early in the day, mum was already preparing the evening meal and I remember glancing at the hob and seeing a pan with a glass lid, steam hissing through the gaps every now and then.

Inside the pan were snugly-fitted, upright, green bell peppers. Boiled whole peppers? That was my thought. I wasn’t looking forward to this meal! 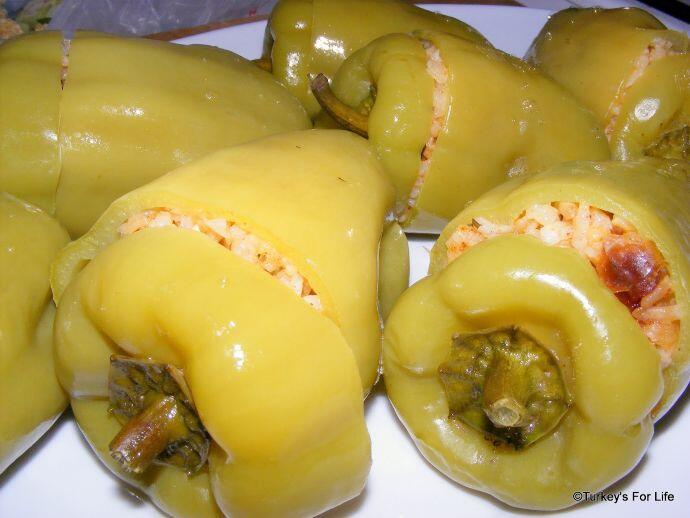 It was only when the peppers were served that we realised they were stuffed with a heavily-spiced rice (dolma means stuffed) and of course, the longer we lived in Turkey, the more we came to know that stuffed vegetables, particularly with this rice filling, are a feature of Turkish cuisine.

We love them. It wasn’t for a while however that I actually attempted to make my own.

A Recipe for Turkish Biber Dolması

This recipe is great if you’ve got friends coming round for food. You can make it early in the day (or even better, the day before) to be served cold later on as part of a buffet and it’s filling so your guests won’t be going home hungry.

The Rice Filling:
First of all, you need to make your rice filling. This mixture is enough to fill 9 or 10 of the green dolmalık peppers (medium-sized bell peppers) you get from the market. We only had 7 peppers so we have a bit of mixture left over.

Making Biber Dolması
The main thing you need to think about for this is your pan. Do a test first by standing your peppers in a deep pan. It needs to be a snug fit and they shouldn’t pop up over the top of the pan. 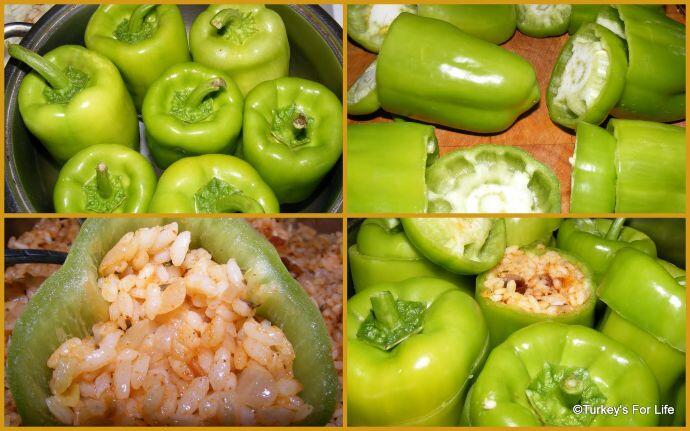 Stuff your peppers and place them upright in the pan 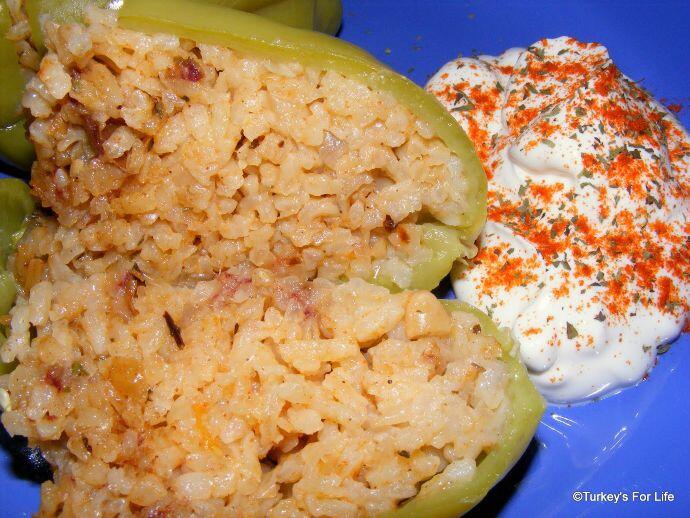 Biber dolması is best served cold. We like it with a blob of süzme yoghurt, sprinkled with mint and chilli powder, on the side.

Biber dolması is one of the many dishes that make up Turkish zeytinyağlı dishes (olive oil dishes) and is also known as zeytinyağlı biber dolması so don’t be shy with your use of the olive oil when you’re making this (some recipes suggest up to half a cup!). It really makes the dish.

If you like the sound of of this olive oil dish, why not try our barbunya pilaki recipe (borlotti beans in olive oil). That’s a late summer favourite for us when barbunya beans are abundant on Fethiye market.

Absolutely delicious but in the US hard to find peppers when they are still small enough to be sweet. Letting them grow big makes the pepper bitter and ruins this dish. Only if you find small to medium size peppers would I ever make Turkish stuffed peppers. I like lots more herbs than this recipe calls for: mint, parsley, dill, basil but, as this recipe says, a bit of sugar, olive oil, currants, cinnamon. These are made with or without meat. I usually add ground beef but about as little as one oz. per pepper.

Thanks for your comment, 39words40. Yeah, we are spoilt for choice with buying suitable peppers for different pepper dishes in Turkey. We're not too big on dill, to be honest, as we always end up adding too much and it overpowers the dish but yeah, we play with other herbs, too. And yeah, love stuffed peppers with meat, too. :)

Hi there, I lived in Besiktas for 2 years and miss these peppers! Is there any way you can find out what peppers these are? I can then try to google it.

As far as we know, they are just capsicum bell peppers but as you obviously know, the skins are much thinner here in Turkey, aren't they. We can try to ask around but most of our friends will just say they're 'dolmalık' peppers. They must have a separate genus name. If we pass any seed shops in town, we'll have a look. :)

@ Anopnymous: Thanks a lot for your comment. Hope the recipe works out for you and we REALLY hope your husband likes it. Would love to hear any feedback on how your biber dolması turned out. :)

Just want to say thanks so much my husband is Turkish and I've been wanting to make something for him to remind him of home ! House has been smelling lovely whilst these have been cooking thank you :)

@ Miss Footloose: I think it'll stay around in Turkey for a while. We've noticed, looking at other people's food blogs, that foods from those areas are very similar. Would love to know more about food history. :)

@ Joy: Mmm, really nice to get it made for you in a cafe. Have you made your own before? We were happy with our attempt.

@ Erica (Irene): That did cross my mind when I was writing the post because it's the same in the UK. The big, thick capsicums. I've no idea if this recipe would work with those peppers.

@ Anjuli: Most Turkish dishes are really healthy. The issues come with the quantities I guess. There are overweight people here but that's a mixture of the portion sizes for the healthy foods and all the burger and pizza chains popping up. We're as guilty as others when it comes to cheating with food. ;)

@ Paul: Hope you get your foodie's heart's desire in the summer! :)

@ Belinda: The pepper is more of a case. You don't really notice the pepper flavour too much because the rice is so heavily spiced. :)