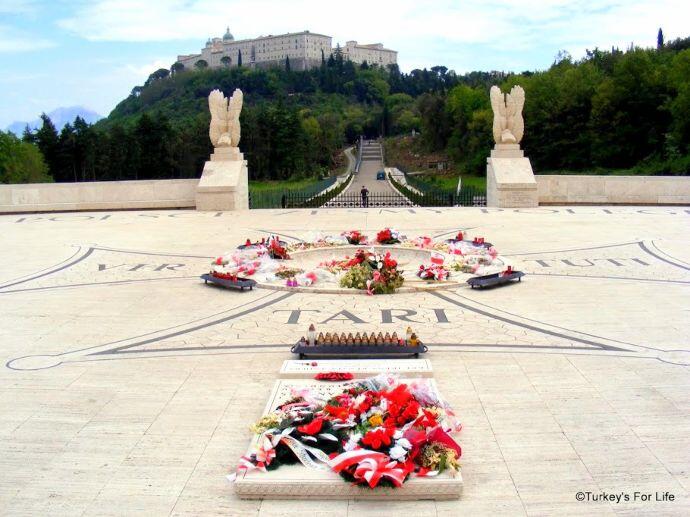 How do you research before you travel somewhere new? Back in May, we went to Italy to stay with some friends. The family home is in the Cassino area of Italy, an area we had never heard of until these friends bought us a book, ‘Monte Cassino’ by Matthew Parker.

Cassino was the scene in what is said to be the hardest fought battle of the Second World War and, while you’re in the area, there’s no getting away from that past.

This is Monte Cassino, and the monastery that sits atop the hill can be seen for miles around. Just below, to the right, is Castle Hill.

The decision had been made to try and take Rome from the south (never before achieved in history) and, as Allied troops advanced northwards towards Rome, German troops created the Gustav Line and bunkered down, occupying the high ground around the monastery.

The two buildings in this photo played key roles in the Battle of Monte Cassino.

Expectations of a warm, inviting, sunny Italy were soon dashed. It was a harsh winter, the valleys were flooded and the terrain mountainous.

A near stalemate battle was fought in these valleys and mountains and thousands of soldiers lost their lives.

German troops were far outnumbered – but it doesn’t take a rocket scientist to work out why so many Allied troops lost their lives as they tried to gain control of the high ground.

Time and again they gained control of Castle Hill and time and again, German troops retaliated to regain the hill.

Weather conditions forced this battle to resemble scenes from the First World War. At this stage of the war, the weaponry of the Allied troops was far superior to that of the Germans’ but it was useless in this terrain.

Tanks became bogged down in marshland and vehicle convoys were bombed from the higher ground. As in the First World War, mules became the only way to carry supplies and face to face combat was common.

Similar again to the First World War, mutual respect between Allied troops and German troops existed. Ceasefires would be called to clear their dead and neither side could see a way out of this atrocious battle.

The different battalions of the Allied forces rotated shifts of going into battle.

Eventually, in May 1944, after intense battle, the Polish battalion who were closing in on the monastery saw a white flag.

Finally, after the loss of over 70,000 lives and the complete obliteration of a town (not a single building from before the war stands in Cassino) this particular battle was over.

We were there in May, close to the anniversary of the end of the battle so you can see that ceremonies had taken place a few days before. Cemeteries and commemorative monuments are dotted about all over this area.

The Polish cemetery is so close to the monastery as it was their battalion that was fighting on this hill when the battle ended.

At the front, a small number of rounded gravestones marked with the Star of David indicate the Jewish soldiers who lost their lives.

Each headstone sits on the slopes of Hill 593, facing the monastery. Poppies, roses and prayer beads hung around the occasional cross are all that break the symmetry.

This was our first visit to a war cemetery. They’re special places that hit you with the horrid realities of war – and a stark reminder of why, today, we will be wearing a poppy.

The monastery at Cassino was rebuilt by American monks in 1946.