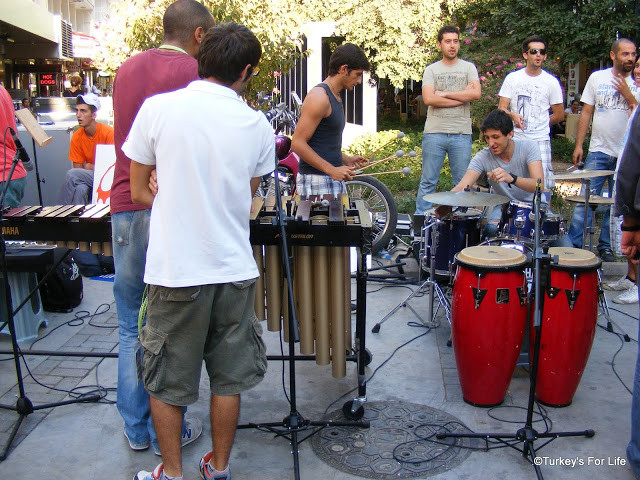 Istanbul’s Beyoğlu area has the famous Istiklal Caddesi – a pedestrianised stretch of shops and eateries and swarms of people weaving their way to their intended destination with varying degrees of success.

It’s a feature of the city, just as Alsancak’s Kıbrıs Şehitler Caddesi is for Izmir – except, we’re working on a much smaller scale when it comes to Izmir.

When we were receiving our orders tips from friends about what to see and do while we were in Izmir, this was the street name that cropped up most regularly.

And, true enough, during our few days there, Kıbrıs Şehitler Caddesi became a feature of our stay. Whenever we left the apartment, this street was on our route to wherever we were going. Shops and eateries do tempt – we ate our first ever söğüş, amongst other meals, along here – street musicians entertain and the side streets that link this thoroughfare to the sea are packed with historic buildings, many of which are now bars. (We spent quite a bit of time around these streets but that’s for another post).

And, like Istiklal Caddesi, Kıbrıs Şehitler Caddesi boasts a religious building in the form of a church. We wrongly assumed this to be a Greek orthodox church but research showed it to be a catholic church. The possible size of the congregation on a Sunday morning is a source of intrigue to us. As this is one of four (that we know of) catholic churches in Izmir, an established catholic population must have existed (maybe still does?) in Izmir when the Archdioces of Izmir was created in 1818.

We didn’t go inside this church – we will do next time – as this photo was taken from behind the walled boundary. We were standing in the car park of Tansaş supermarket! Yes, Kıbrıs Şehitler Cadessi has the obligatory supermarket – but on this occasion, it’s actually useful.

There may be street foods, bakeries, clothes shops and bars for the residents of Alsancak to peruse and enjoy – all good fun for the city dweller – but apart from the Alsancak Sunday market, one needs to buy the daily essentials of life from somewhere.

Kıbrıs Şehitler Caddesi doesn’t carry the constant weight of the masses of Istiklal Caddesi – at least, not at the time we were there, but many of the Izmirli apparently flock to the nearby coastal areas during the summer months.

It also doesn’t have Istiklal’s historic tram or the ornate 19th century buildings that cause the passer by to look up to admire the intricacy of the stone-masonry.

But there’s a vibe in Izmir – a feel-good vibe very much created by its residents that forces you to forgive the concrete, high rise blocks and enjoy this street, and indeed the whole city.

We had no expectations when we arrived in Izmir but the city got to us, and this first visit will definitely not be our last…