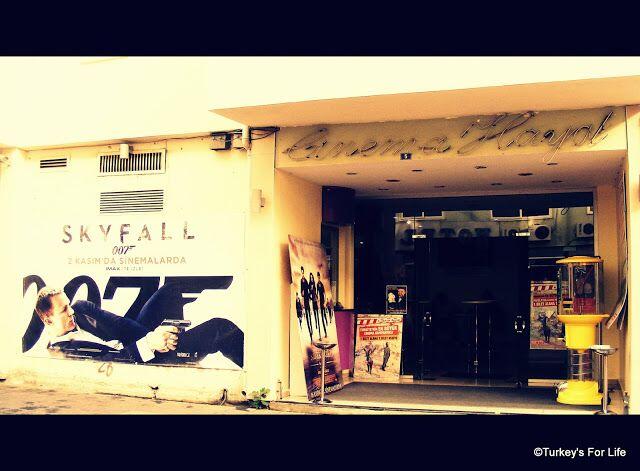 Long ago, in a faraway corner of Southwest Turkey, the residents of Fethiye were going about their daily business as usual, when, all of a sudden, from out of the blue, some startling news appeared before them….

Oh, how excited the Fethiye folks became when they heard that the new James Bond film Skyfall was going to be filmed in Turkey.

But that wasn’t all.

Where was he going to stay when he arrived to do the filming? Would the locals catch a glimpse of him?

A unique buzz filled the atmosphere around the town and James Bond took over as the main topic of conversation.

Months passed and then one day, as if the announcement of filming wasn’t exciting enough, it was announced to the residents of this Mediterranean town that the film producers would be auditioning for extras for the Çalış Beach scene.

Now was the chance to actually appear in a James Bond film, if the Fethiye folks so wished.

Messages shot around the social networking sites between those who were eager to be involved.

The winters are usually relatively quiet in Fethiye, and so, last winter was consumed with James Bond fever…

Curious onlookers were given the classic, “There’s nothing to see here,” as they tried to peer through and catch a glimpse of something, anything, that might be to do with a James Bond film.

And one of our locals, Güven’s Bar & Restaurant, proudly announced to all who were listening that people from the set had been to borrow some of their tables and chairs.

Right about this time, with their usual impeccably bad timing, Barry and Julia took themselves off to Italy for a few days. And, as such, missed the arrival of the lovely James Bond star, Daniel Craig and his Bond Girl co-star, Bérénice Marlohe.

They were staying at one of Barry and Julia’s favourite haunts, the Yacht Classic Hotel.

But this was the era of modern technology so they continued to follow events in Fethiye from their rural base in Italy.

When they arrived back to Fethiye ten days later, the marquees were gone, filming was complete and it was as if nothing had ever happened – bar the odd clue, that is.

The residents of Fethiye settled back into the their daily routines, enjoyed the summer and waited for November for the film to come out…

Once more, excitement filled the town and the residents filed in and out of the cinema in shifts to watch the film that showed Fethiye…and maybe someone they knew.

The lights went down in the salon and, once the piercingly loud adverts and film trailers had finished, the long-awaited Skyfall began.

Scenes from Istanbul flashed before them in a whirlwind of the ridiculous far-fetched action that James Bond films do best.

Then came the Çalış scene. “Oh look, there’s such and such, oh and such and such. Where? There, just to Bond’s left. Is that it? Is Turkey done now?”

Months of Fethiye excitement were over in a matter of minutes, but there was no damp squib because everyone then settled into enjoying one of the best James Bond films in a long time.

And hopefully, in true fairytale fashion, everyone lived happily ever after…