So if shopping isn’t your thing (we’re most definitely not shoppers), why would you bother making the effort to go and find Kıbrıs Şehitleri Caddesi if you’re staying elsewhere in Izmir?

We were staying in an apartment in Alsancak so this area was our haunt while we were there, but we’d definitely stay around this area next time we visit. This is one of the reasons:

The side streets of Alsancak are lively

As you stroll along Kıbrıs Şehitler Caddesi, it pays to keep looking to your left and to your right. Why? Because sokakta hayat var (there’s life in the street).

The side streets that run perpendicular to this main thoroughfare are not forgotten little alleyways that are best left ignored in fear of what you might find down there.

These banners (see photo above) mark the entrances and exits to most of the side streets and, you know us – if we see an Efes sign, we’re going to be intrigued! 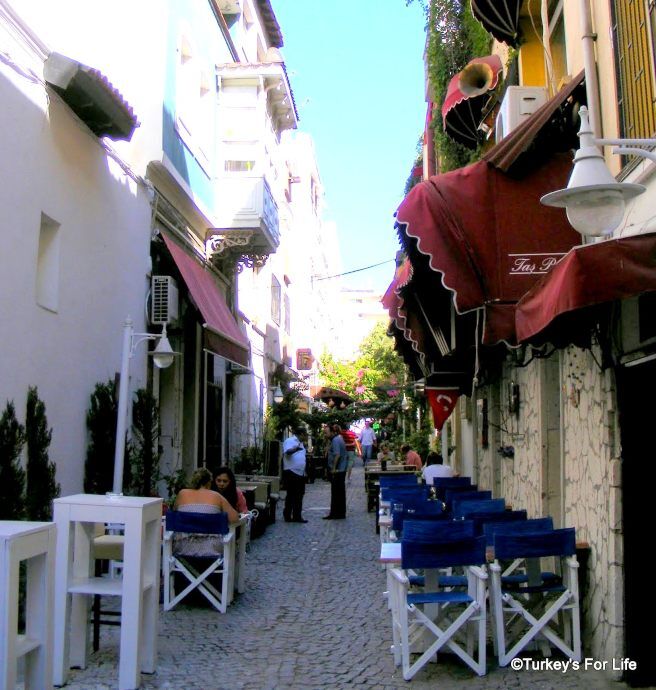 One of the quieter side streets of Alsancak

We’re glad we were intrigued. Most of these streets are cobbled, shaded and leafy…and they’re packed with bars and eateries.

Despite the quaint, we-sell-overpriced-food-and-drink appearance of these places, what we saw on the menus was very agreeable with our meagre wallet contents. Great news for the budget travellers like us! 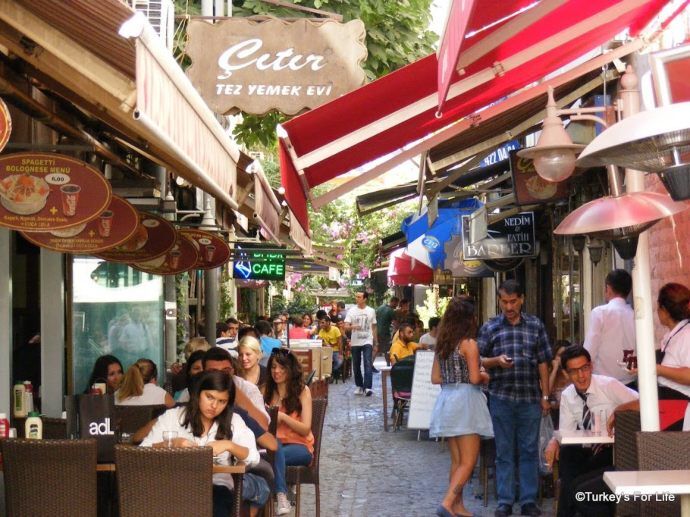 The side streets are great for budget travellers

Some alleys had restaurant after restaurant selling nothing only pasta dishes. Pasta must be popular here – every restaurant was full.

The street in this photo was full of budget eateries – you can just make out the price on the top left menu: Spaghetti bolognese and a soft drink for 6 TL.

And as you can see from this photo, taken mid afternoon, sokakta hayat var is no understatement.

@ Jaz: If you like to eat, drink and have fun, the side streets of Alsancak are good fun! :)

i would love to explore all of those side streets!