Yes, we know spaghetti is a much loved Italian pasta used in many classic recipes. So what on earth are we doing writing about Turkish spaghetti?

Bear with us. There’s good reason for this.

And, if you’ve ever had a holiday in Fethiye, you might well know where we’re going with this article.

Think back to your favourite boat trips and the meals you’ve eaten for lunch whilst sitting in one of the stunning bays along the coast.

More often than not, there is a spread of Turkish meze dishes along the table waiting to tempt you.

And so does this Turkish spaghetti dish!

If you know us, you’ll know we love easy recipes with good simple ingredients. This is one such recipe!

This Turkish spaghetti has been a part of our lives since 1998 when we first holidayed in Fethiye.

We were on a 12-island boat trip. And there it was, on our plate, as part of our lunch.

The first time we’d seen spaghetti used as a cold side salad.

Being honest, we both thought it a bit odd. But we went with it.

A heaped scribble of spaghetti coated in olive oil and a type of light tomato sauce.

It was unlike the traditional Italian tomato-based pasta sauce we were more familiar with.

We now know this Turkish sauce is made with salça (tomato paste / tomato puree or red pepper paste). A staple ingredient of any Turkish kitchen.

And sometimes, for an extra bit of kick, you’ll see some pul biber (spicy red pepper flakes) mixed in, too.

From Boat To Home

So, now, this Turkish spaghetti recipe is just a part of the day if you’re on a boat trip – good food whipped up in the boat’s galley.

And we make it at home, too. A great recipe for busy weeknights.

If you’ve got picky eaters in your household, even they might like this one. And vegetarians and vegans can enjoy this one, too!

There’s just the two of us in our house and we’re easily pleased when it comes to homemade dishes.

But this wonderfully simple Turkish spaghetti recipe should be a pleaser for the whole family.

It’s certainly a reader favourite (they who are familiar with Fethiye boat trips) as we’ve been asked about it numerous times over the years.

It’s just taken us until now to share the recipe.

Of course, if you want to, you can make your salçalı spagetti makarna slightly more adventurous with the addition of some extra ingredients:

But for this Turkish spaghetti recipe, we’re keeping things boat trip simple! Just the spaghetti and the sauce.

Oh, okay, then – a bit of dried mint for extra zing. And a little bit of fresh greenery to garnish, too, by way of a sprig of fresh basil.

Fresh herbs always work so well with pasta and sauces.

The best part about this Turkish spaghetti recipe is, because we’re eating it slightly warm or at room temperature, it doesn’t matter if you make too much.

You can keep it in the fridge for a couple of days and enjoy it again next time.

As a rule of thumb, we allow approximately 75g of spaghetti per person.

Some people like to cook spaghetti until al dente. We like to go just beyond that point.

So when you cook yours, feel free to cook it to your own taste.

Check on the packet instructions for how long to cook it. But it generally takes around 10 minutes.

We also add a drizzle of olive oil to the boiling water just before we add the spaghetti. This will stop it from sticking together when you drain it.

And then, when you drain your spaghetti, keep some of the pasta water to one side.

You can use this to add a splash of water make your salça sauce a bit thinner.

We’re not making a separate meat sauce like you would do for a spaghetti bolognaise, for example.

For our Turkish spaghetti recipe, we’re simply making a coating for the strands of spaghetti.

Over a low heat, we’re going to add a tablespoon of olive oil and two tablespoons of water to the same large pan – enough to cover the base of the pan – and heat them through.

And then we’re going to add a dessert spoonful of salça to the pan. And a half teaspoon of dried mint along with a little salt and black pepper and mix.

Our salça is a mix of pepper and tomato paste. Turkish grocers and supermarkets will probably sell red pepper paste – biber salçası.

If you can only get tomato paste, you can add a pinch of ground paprika to your mix, too.

Stir it around and add a bit more water if necessary. But remember, you need a thick paste. Not a sauce.

And then it’s simply a case of adding your spaghetti back to the pan and stirring it carefully until it is coated.

Serve it in a large bowl as part of your meze table so you can enjoy it with grilled meats or serve on it’s own as a healthy, low calorie meal. 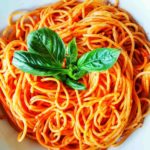 This spaghetti is often served as a meze dish but is also popular as a quick and easy meal. Served at room temperature, it makes a good pairing with grilled meats and seafood.
Course Side Dish
Cuisine Turkish
Prep Time 0 minutes
Cook Time 12 minutes
Servings 2 people
Calories 150kcal
Author Turkey’s For Life

For Your Spaghetti Coating