Sat at the foot of Kadifekale, sandwiched between the hillside and the streets of Kemeraltı is the ancient Izmir agora. When we wrote about the Lycian and Roman ruins of Xanthos, we said that around many of Turkey’s archaeological sites, modern daily life continues.

Nowhere is this more evident than at Izmir agora. 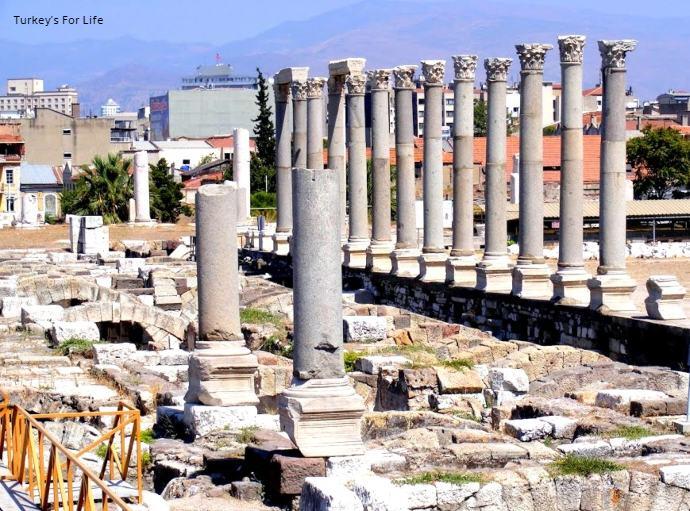 Standing outside and peering into Izmir’s agora

And here’s a sizable ancient site right in the middle of it all; a site packed with clues about 8,500 of years Izmir’s history when the area was known as Smyrna.

To spend six days in the city and not go to Izmir agora would have been neglectful of us, and, after going inside to look around, we would have missed out big time had we decided not to bother visiting.

Izmir agora has a lot of competition when it comes to Turkey’s archaeological sites but that doesn’t make it any less interesting for today’s visitor. Not that you’d notice that fact on arrival at the site.

The above photo is the view from the perimeter fence as you arrive at the entrance. There was a smattering of tourists there, poking their cameras through the wire fencing to get photos and there was an archaeological dig in progress.

Aside from the archaeologists, there wasn’t a soul beyond the fence. The automatic assumption was that the site must be closed because of the dig, so we took a couple of photos and decided to head on up to Kadifekale. 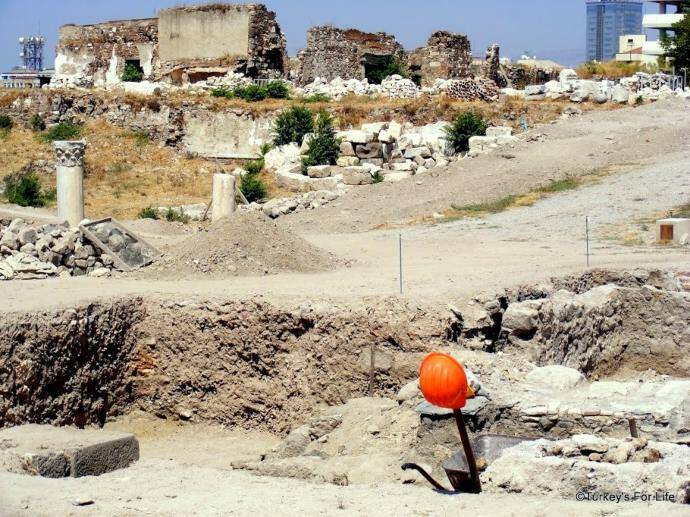 A clue that the archaeologists are here

As we followed the perimeter fencing we spotted a ticket booth with a lady sitting inside. A beaming smile appeared on her face as we approached.

Do all tourists really just poke their camera through the fence and not bother going inside? “5 lira to go in,” she said. 5 lira and the place was empty. Just bizarre!

And to be honest, we thought we’d seen all there was to see just by scaling the perimeter (maybe that’s what everyone else thinks, too) and so Barry waited outside while I wandered inside.

At this point, I was paying 5 lira just to get a couple of photos from different angles and then I was coming straight back out again.

More Than Meets The Eye

But there’s more to Izmir agora than meets the eye.

It was a strange feeling entering this ancient site all alone (the archaeologists were on their lunch break). Corrugated roofing, where the digs are taking place, covered some sections, and hornets were dancing around my feet as I photographed the columns.

Where had the hornets come from – can’t say they’re my favourite insect in the world – and why were they there? 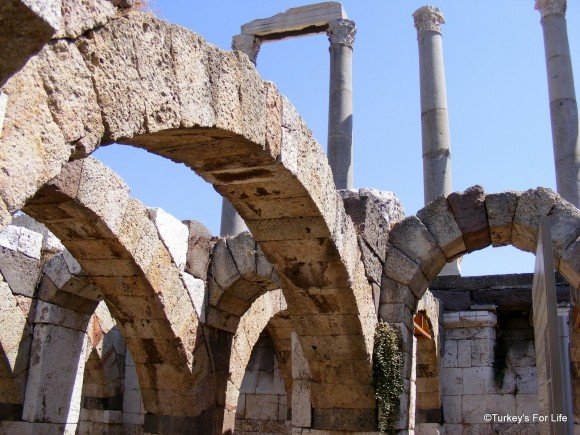 Information boards and arrows guided me along a wooden walkway and then down a flight of steps. All of a sudden, the photo taking tourists and the ticket booth were out of sight and I was completely alone in a world of fantastically intact stone arches.

It’s not what you can see from the ground that makes Izmir’s agora so interesting – and everyone, except me, was missing out. 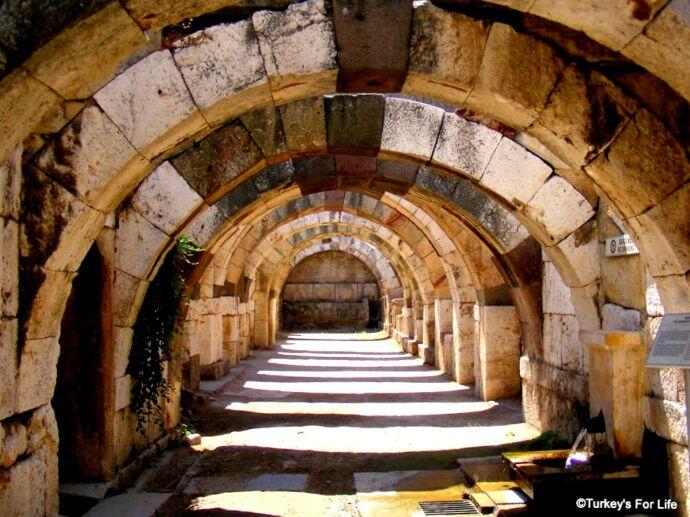 Fresh water spills from the taps in the agora

Having a place completely to yourself, and being underground – a mixture of being slightly spooked but also complete freedom of imagination, wondering what life was like around Izmir agora thousands of years ago.

And then the answer to why this site is a hornet haven – fresh running water spilling from water taps in the walls. 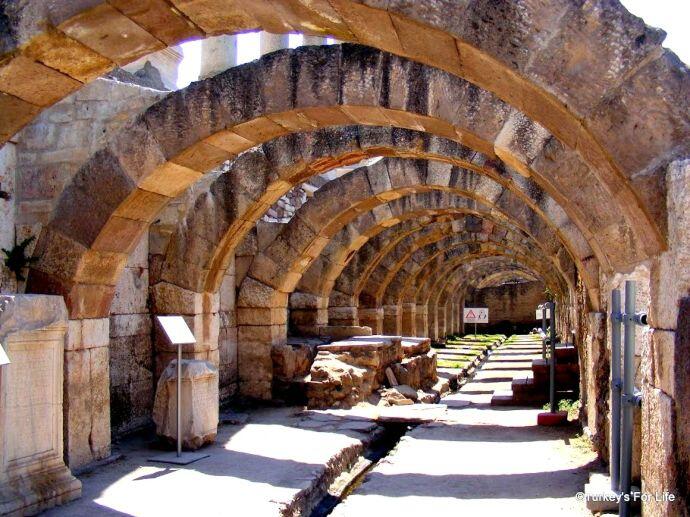 Archaeologists are unsure as to the source of the water

Where Does The Water Come From?

It was running along narrow channels carved into the ground. This is a fresh water supply that has constantly run through the agora since the Roman period (4th century BC) and still does to this day.

What’s fascinating is that archaeologists are still unsure as to where the source of this water supply is. Just amazing!

It’s thought the water was stored in cisterns and used in the workshops around the agora. 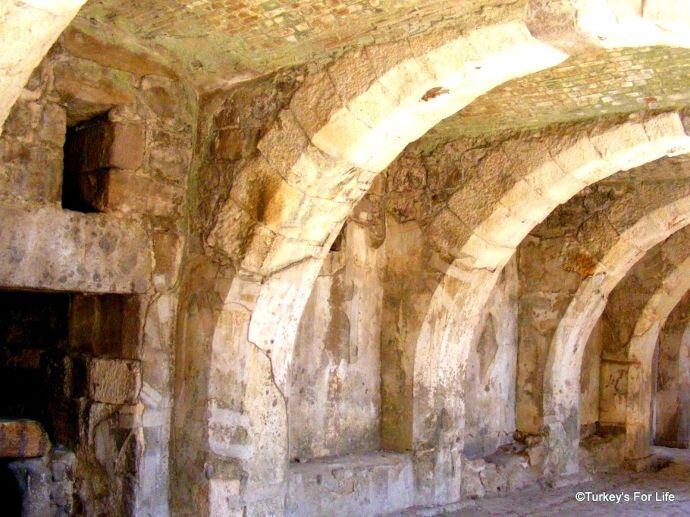 Then it started to get darker

At the far end of the site, the walls become fantastically thick – maybe a metre – and the archways are closed. There were still information boards and arrows so I decided to continue, despite the increasing lack of natural light.

More To See In The Future?

It was with a bit of trepidation that I passed through a small doorway which was pitch black (you can get an idea of this just on the left of this photo) but fortunately, there really was a light at the end of the tunnel; a light that I walked very quickly towards! 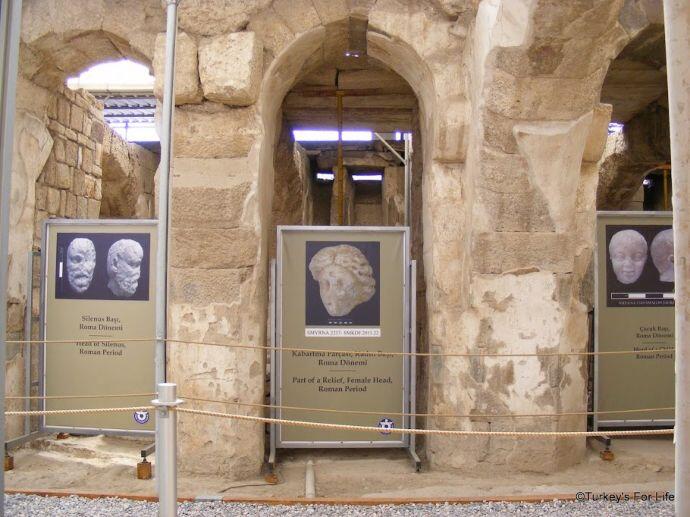 And this is what was there to greet me. This area was completely fenced off and I had to zoom in to get these photos.

There are still digs going on in this section but it also looks like there’s going to be a more organised museum-type layout in the future, detailing what’s been unearthed. 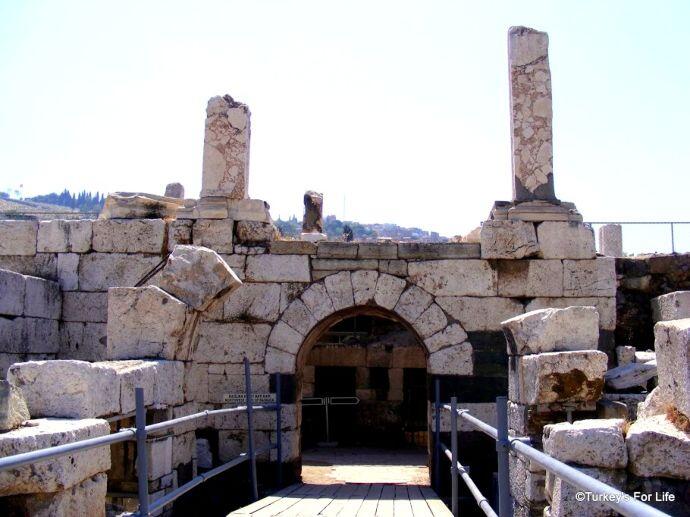 The northwest gate of the basilica

From here, I was led outside via the northwest gate of the basilica.

Next Port Of Call

Scan your eyes to the left of this shot and the hill in the background. The Turkish flag you can just make out in the distance marks the top of Kadifekale, our next port of call.

Can’t say I was relishing the climb, but it was our last day in Izmir and the only outstanding item on our Izmir-must-do list. Time to leave the agora, find Barry and climb ourselves a hill.

While Izmir Agora might not be top of your agenda for archaeological sites in Turkey, digs are current and it’s a site that’s changing all the time.

Smyrna was an important centre along with nearby Ephesus (Efes) and Pergamom (Bergama) and was home to the likes of Homer and Alexander the Great – so expect lots more exciting finds in the area.

As it stands now, it’s easily worth your time and a few lira of your cash!

@ Pat Yale: Thanks for your comment. We didn't know there had ever been another entrance to the agora so maybe our ignorance helped, in that case. :) Loved it once we did get inside and would like to back again soon to see how it's developing.

Main reason so few visitors in my opinion is that the most obvious entrance from Anafartalar Caddesi has been closed for donkey's years. Most people probably give up at that point rather than realising that they should walk all the way round the perimeter fence to find the ticket booth. But agree that it's well worth it once you do get inside.

@ Alan: Well, I suspect you'll just love it. So much information around, too, so you really get an idea of the history there.

@ BacktoBodrum: It seems to be growing all the time so it's definitely worth a visit. So cheap - and no doubt free if you have the müzekart. :)

Spectacular photos...I must go to see these ruins.