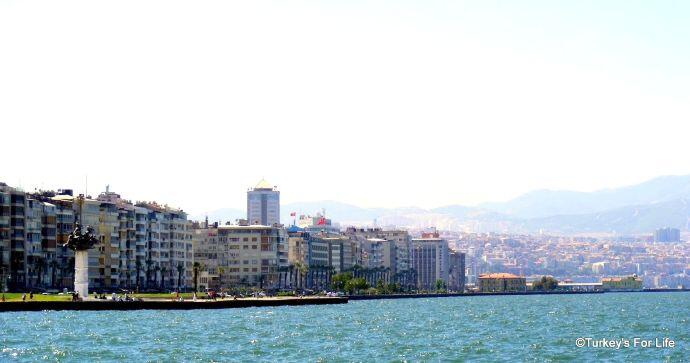 We’re very fortunate that travelling on a budget is made much easier for us by the fact that we both love to walk. In Izmir, apart from catching a local bus from the otogar into Alsancak, we walked everywhere.

Sitting on the Aegean Sea, Izmir’s a breezy city, so late summer ambles (we were there at the beginning of September) are perfectly pleasurable, especially when you know you’re never more than a stone’s throw away from a refreshment stop of whatever description.

And, because the city stretches around the curved inlet at the end of the Gulf of Izmir, that means regular, cheap commuter ferries carry passengers between the opposite shores; perfect for incorporating a little sail across the Aegean into a circular walk.

We were staying in an apartment in Alsancak and, as Alsancak has its own pier and ferry stop, it was an ideal place to begin our journey.

The Izmir commuter ferries are made of sturdy stuff, just like the vessels that ply the Bosphorus routes of Istanbul, so the choppiness of the sea isn’t a factor.

Our ferry cut through all the waves, leaving us able to enjoy the sea breeze and the views along the the shoreline of Alsancak and down towards historic Pasaport Pier.

The crossing only takes 10-15 minutes before you disembark in the neighbourhood of Karşıyaka.

Karşıyaka holds its own in modern Turkish history as the burial site of Atatürk’s mother, Zübeyde Hanım.

Unfortunately, time commitments meant we couldn’t make it there (a must-visit for another time) so we wandered through the pedestrianised shopping area of Karşıyaka before making our way back to the seafront to head towards Bostanlı.

As with the Alsancak and Konak areas of Izmir on the opposite shore, amongst the high rise apartment blocks, there are still random historic buildings that catch the eye in Karşıyaka – and there’s a few monuments and statues along the harbour, too, but we’ll save those for another post.

For now, we’ll just walk along the seashore towards Bostanlı.

Apart from a brief detour along Karşıyaka’s shopping street (just opposite the ferry terminal), this circular trip is all about taking in the sea air. There’s not a lot of quaint prettiness happening here. Concrete rules. We’re not fans of concrete.

But the waves crash against the sea wall, providing cooling spray mist; there’s a chilled out atmosphere as people enjoy a Sunday stroll or a spot of fishing; dads peer through binoculars as their children battle the strong currents in some type of sailing competition taking place in the middle of the bay…the concrete is forgiven.

We keep following the sea wall; sea to the left and grassed areas, main road and seafront apartments to our right. As we hit Bostanlı, we now need to scan right for its ‘tourist attraction.’

You see, Bostanlı is becoming famous for its leaning apartment blocks. And lean they do. They’re not difficult to spot. We’re no engineers and wouldn’t even try to guess what’s causing this – no doubt the residents are quite keen to find out.

So now we get to Bostanlı Iskele (the ferry point you can see in the photo above). Here, we have a choice of ferries, all going back to the opposite shore. We take the Bostanlı to Konak ferry option and, luckily for us, it’s just about to leave.

This time, the journey is around 15-20 minutes.

We pass other commuter ferries (and the poor kids trying to complete whatever circuit they were doing), we can see the opposite shoreline with the Hilton Hotel dominating the scene, we can see Kadifekale reminding us of its presence (at this stage, it was still unconquered) and, as the ferry draws closer to Konak Pier, we can just make out Asansör, almost camouflaged amongst the sprawl of buildings.

And so we disembark at Konak, the opposite end of the shoreline to Alsancak. But never fear because the walk back to Alsancak takes in some Izmir sights, as well as more than a few bars / restaurants / coffee shops.

Izmir Saat Kulesi is just opposite, so, if you’ve not been there yet, off you go to see that. We’ve already got too many photos of it from too many angles so we’re taking a left and sticking to the seafront.

If it’s summer and your legs get tired, you can always hop onto a horse and cart (you can see one in the photo)…but if you do that, you’ll miss out on all those refreshment stops.