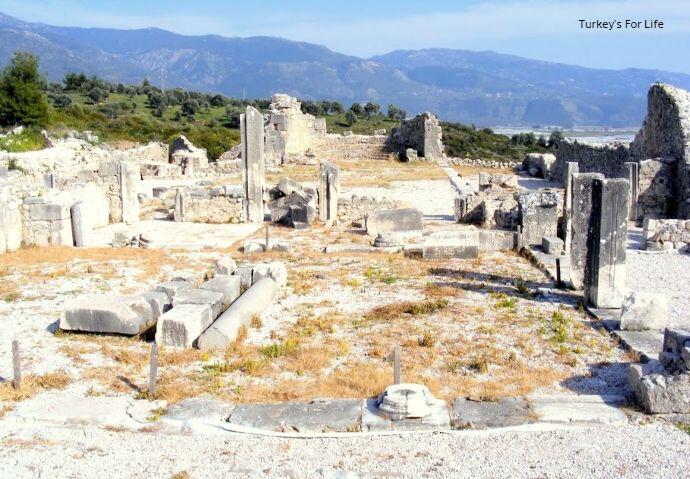 Our previous post was a series of photos showing different scenes from the site of the temple of Leto, Letoon. This post is another photo story but this time, all the shots are of different areas of the site of Xanthos.

A Wander Around The Archaeological Site Of Xanthos

If you follow the Lycian Way and walk from the ancient site of Letoon to Xanthos, at the entrance road to the Xanthos site, you will pass the Arch of Vespasian to your left.

To your right, you will see the rubble and an information board marking the site of where the Nereid Monument once stood.

The Nereid Monument is now displayed in the British Museum after a certain Sir Charles Fellows came along in the 1830s, liked what he saw – and so returned in the 1840s with a group of sailors to help himself to that and other marvels of Xanthos.

Further up the road, on the left hand side, you’ll see the Roman theatre.

You can enter the theatre through a stone archway and it’s worth doing so because standing atop the rows of seats are the two landmarks which have become a symbol of Xanthos.

The Harpy Tomb and the Lycian Sarcophagus.

The simple, rectangular Harpy Tomb was once topped with marble (we’ll leave you to guess who removed that) but at least we can still see a cement copy of what it should look like.

The Harpy Tomb’s neighbour, the Lycian sarcophagus, is thought to date from the 3rd Century BC and is unusual in its design.

Even if you’re not interested in the history around Xanthos, photographers will be kept occupied for some time around the theatre as this pair of tombs and the archway through which the theatre is entered make for some great photo opportunities.

By the time we were leaving, the sun was getting lower in the sky and the silhouettes were already looking impressive.

On leaving the theatre, you’ll see a couple of cabins on the opposite side of the road.

This is where you pay your entrance fee (even though you’ve probably already been round the theatre) and in summer, there is a cafe and bookshop open, too.

It’s this side of Xanthos where we love to spend time. It’s not so much a looking-at-the-ruins visit as an enjoying-the-mountain-scenery stroll. A stroll along the Roman agora.

And towards the ruins of the Byzantine Basilica. It’s not as obvious as the outstanding basilica at Kaunos, near the small town of Dalyan to the west. But, it’s impressive all the same and you can make out the apse at the far end.

The last time we were at Xanthos, it was possible to view the beautiful floor mosaics around the edges of the walls.

These days, there is tarpaulin and gravel where the mosaics are/were and the entrance is fenced off.

Archaeological work has been taking place at Xanthos for decades and, along with Letoon, Xanthos enjoys Turkish World Heritage status.

Take In The Scenery

But let’s not dwell on that. Take your photos, breathe in the fresh air and wander on along the hillside to this lonely sarcophagus.

As you can see in the photo, there are extensive views of the polytunnels and greenhouses of Kıınık from here.

As in Kumluova, where Letoon is, most of the people in Kınık earn their living from tomato production. To the right of this shot, in the distance, you can also see the sea at Patara.

Further along, excavated and labelled boulders and column sections are neatly laid out, set against a backdrop of forested hills and mountains.

Even if you’re starting to feel the onset of ruin-fatigue, the scenery of this beautiful area should be enough to keep you interested.

And as with many of Turkey’s ancient sites, daily life still continues in their immediate surroundings.

We stood at the top of the hill, amongst the Lycian tombs, for some time watching this beekeeper harvesting the honeycomb.