Over past years, because of going backwards and forwards to the Greek island of Meis (Kastellorizo) to renew our visas, poor old Kaş had become no more of a stop off point for us. It was a few years since we’d spent any significant time there. The time came to hire a car for the day, hit the road and head back to check out some things to do in Kaş. 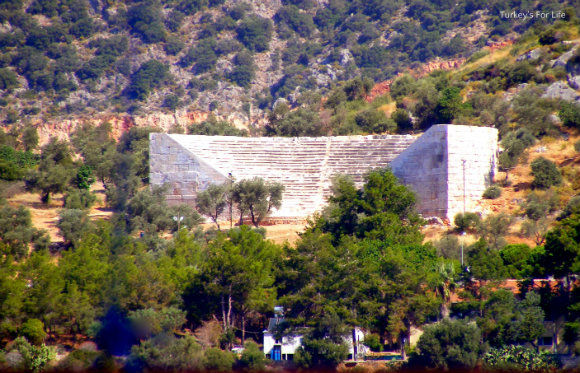 You can see Antiphellos Theatre from the sea

After a quick stop to take some photos of Kaputaş Beach we continued towards Kaş with a few more photo opportunities in mind. During our many trips to tiny Meis we’d noticed that while sailing across to the island, you could see an ancient theatre just to the west of Kaş centre. If it could be seen from the sea, it must have impressive views. Antiphellos Theatre was first on our list of little explorations for the day.

As ancient theatres go in Turkey, Antiphellos is not going to take your breath away and make you go ‘Wow!’ We suspected that fact from what we had seen in the distance from the sea. Antiphellos isn’t huge by any stretch of the imagination. But we were here for the views.

Antiphellos is surrounded by olive trees

It’s an easy 5-10 minute walk (and signposted), to Antiphellos along a quiet coastal road that leads westward, away from the town centre. Set amongst olive trees and the rocky hillsides typical of Lycian Turkey, it makes for a pleasant half hour or so of your time. One of those places where you wish you’d taken a picnic with you so you can idle away a couple more hours.

As usual in the springtime, bar a teenage lad texting his girlfriend from under the shade of a tree (she arrived a few minutes later), we were the only people there. Springtime explorations of Myra and Perge in Antalya have offered us similar solace.

Up close and personal with Antiphellos

According to the information board at the entrance, it’s thought the Hellenistic Antiphellos theatre was constructed in the first quarter of the 1st Century BC from local limestone. We’re on Akropolis Hill, here, and 28 rows of seats sat 4,000 spectators. In recent years, parts of the theatre have been restored using the same stone. 26 rows remain and the theatre has been used for public events. 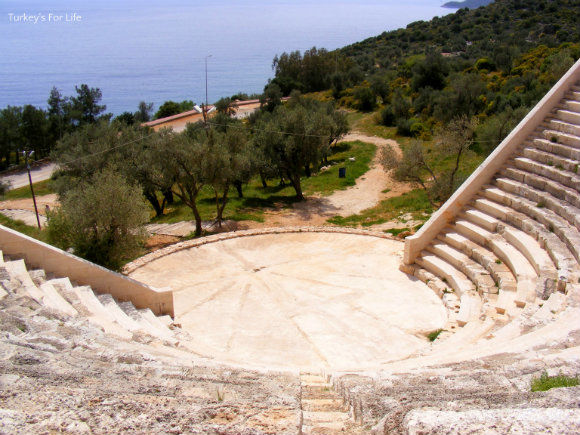 There are neat new lines at Antiphellos

It’s a tough one for ancient sites such as this. The newness of the restoration does jump out at you. The stone is bright, clean and smooth. The lines a bit too neat and angular. But what is the restorer to do? In years to come, this new stone will age and start to blend with its ancient counterparts.

Maybe we’re being a bit too selfish in the 21st century to expect it all to look so perfect and aged for us. Especially if we want these theatres to be in use today and still be enjoyed by others, hundreds of years in the future. Rightly and wrongly, restorations the world over come in for criticism – and Turkey is certainly no different. 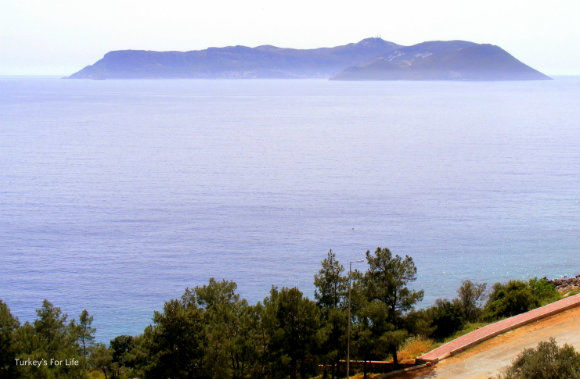 Views Across To Meis

And we didn’t not enjoy climbing to the top of the theatre via the mix of modern and ancient stone steps to take in the scenery. Meis is clearly visible. Strange to think that the lump of land in the sea opposite is another country; that as we looked across to it, the same staff were probably serving customers from the same bars and tavernas along the harbour. All those people we’ve so familiar with over the years. 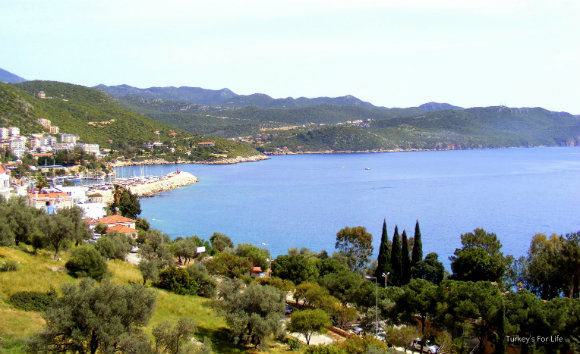 There are views back towards Kaş from Antiphellos

Views Of The Town

And back to Turkey. From the very top row of Antiphellos, looking eastwards, there are views of the bays and islets around Kaş. Views of the town itself with the harbour wall jutting out, providing shelter and calmer waters for the boats and gülets moored up there.

In the low lying hills beyond, you can make out a road that zigzags and climbs upwards, away from the sea. We were intrigued by this road, we had a bit of time to play with, so we decided to explore this, too. We were to find great views of the Kaş peninsula from there!

@ Alan: Yeah, Kaş has more of a daily feel to it, doesn't it? We've only explored a bit of the mountain area round there...need to see more...like we do of everywhere else. :)

Kaş has managed to keep what Kalkan has lost - quite like the place but it was the mountains inland from the town that first sold us on the idea of living here all those years ago.

@ Migle: We used to live in Fethiye on tourist visas (for many years) because the residency fees were too expensive for us and we used to go back to the UK a lot. Fortunately, when the visa regulations were changed to the Schengen style system, the foreign ministry also reduced the cost of residency (at least for British nationals). We always wanted to be resident in Turkey so as soon as the fees were reduced, we took it up.

We've not been to Kaş or Meis since we needed to renew our last ever visa so this visit to Kaş was purely to enjoy a day out. :)

@ Jack Scott: Know exactly what you mean with Kaş. Someone asked us recently on our Facebook page about which was nicest. Hmmm, what do you mean by nice. Kaş ans Kalkan's different present day personalities are there for all to see. It's up to people to choose their preferred option isn't it...but we're Kaş people, too. :)