“Eskişehir’s sights do not mount to a great deal and it’s not a place you would want to hang around in for more than a few hours. Fortunately, there are good road and rail connections…” (1)

Wow, how quickly things can turn around. You can’t beat an out of date guidebook. This quote is from a 6th edition of The Rough Guide way back in 2007 (which means it was written much earlier than this) and Eskişehir is given three short paragraphs. We keep our old books just so we can see how much places change…because nothing stays still for too long in Turkey. Eskişehir is a prime example of this and it’s a city that’s hoping for a little bit of your time in the not-too-distant future.

As far as tourism goes, Odunpazarı is arguably the flagship area of Eskişehir. Sitting on a hillside, overlooking the city, its colourful 19th century Ottoman houses are slowly being restored, and the tourists – mainly domestic – are starting to arrive. So what’s the big attraction? Let us show you.

A wander around the streets of Odunpazarı 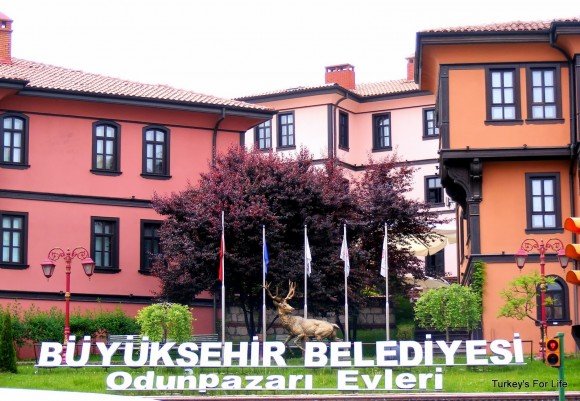 As you can see from this photo, the houses of Odunpazarı are not difficult to spot, with the local council confirming to aimlessly-wandering-tourists (us) that they have indeed stumbled across the right place. As the 2013 Turkiç Capital of Culture, Eskişehir is a city that’s making the most of showcasing itself. 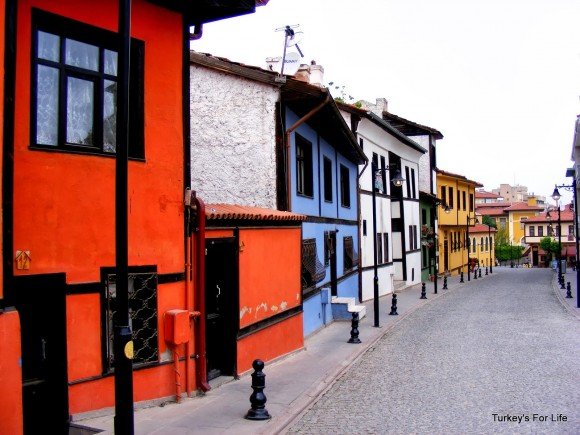 And ambling around and eating in this old area is very pleasant. These photos were taken after we’d just arrived in Eskişehir and had enjoyed our breakfast early lunch of köfte and piyaz at Köfteci Ahmet. We had no idea what we were looking for – merely getting our bearings in our new surroundings – but there was more than enough to keep the camera snapping away. 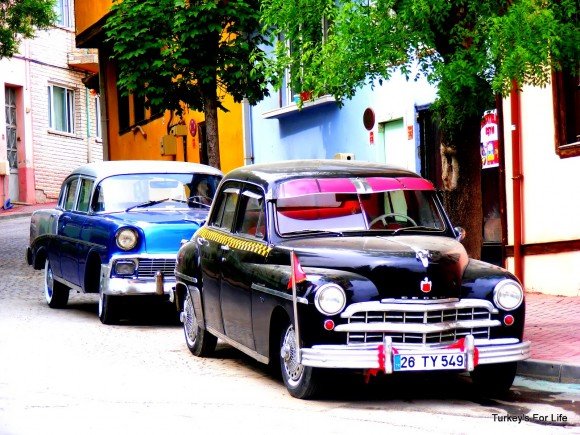 Like these two old cars for instance. Old cars for an old city. Odunpazarı was proving to be an interesting place. It’s not derelict or abandoned. Families live here, there are a few places to eat (such as the Kırım Tatar Kültür Evi that served us the huge portion of çiğ börek), there are museums, and, as restoration continues, there are the inevitable boutique hotels that follow. 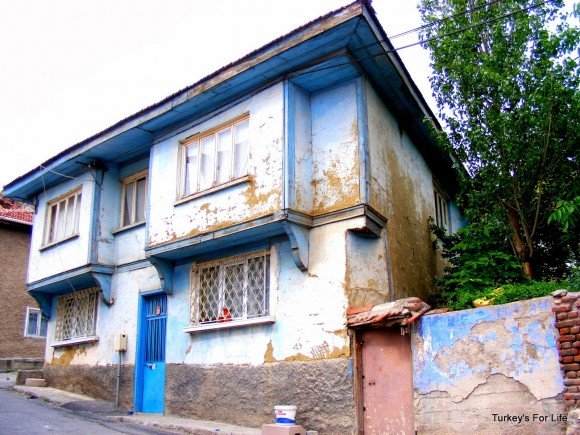 And Odunpazarı is not so much a completed project; more of a work in progress. Street by street, building by building, rendering, painting, pavement and road laying is taking place. We also loved looking at the yet-to-be restored homes and buildings too. It made the area feel more real. 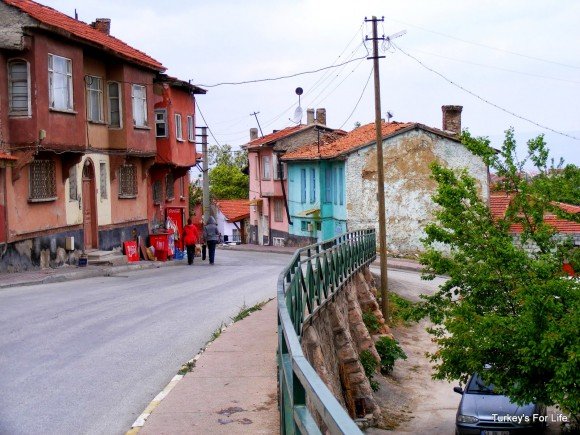 ‘More real’ was residents of Odunpazarı getting on with daily life, going out to do a bit of shopping. Just to the left of this photo is a public tap where two women were working hard, scrubbing their house rugs. Unlike Antalya’s old town, Kaleiçi, which is almost completely given over to tourism, there’s a happy sense of the mundane to Odunpazarı. Whether that will continue as the area becomes more well-known remains to be be seen – but we loved what we saw in April 2013. 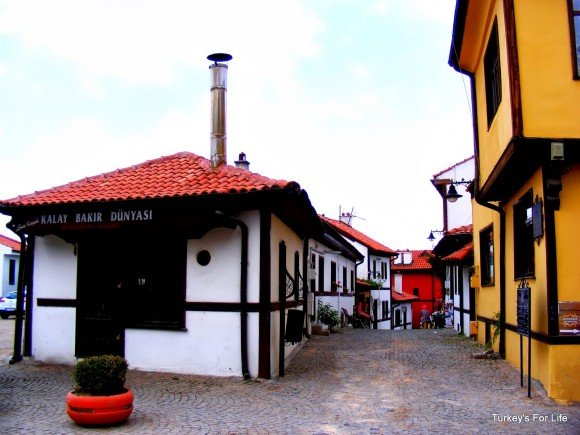 A couple of souvenir shops selling the obligatory fridge magnets have popped up (yes, we did buy a couple for our friends – they collect them) and they also sell something else; something special to Eskişehir. When you buy your meerschaum pipes as souvenirs of your time in Turkey, Eskişehir and its surrounding villages are the places where it is mined. This is the place where you come to buy your meerschaum (lületaşı). 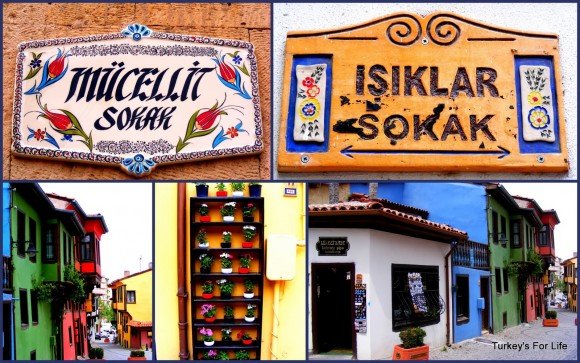 In Odunpazarı, there are lületaşı (meerschaum) workshops and and small showrooms where jewellery and ornaments, as well as pipes, are produced. And tourism hasn’t hit hard here yet. It’s all reasonably priced and, as with the streets and street names, it’s all very pretty to look at. As usual, however, we’re saving the lületaşı for another post.

Oh, and just to let you know, in case you’re wondering. Re the quote at the beginning of this post: our stay in Eskişehir was for much longer than ‘a few hours.’ We stayed for three nights and will definitely be returning at some point because we ran out of time before we’d seen everything we wanted to see.

@ Adnan, thanks a lot for your comment. Of those four places you mentioned, we made it to Kent Park, only. As we said in this post, we just ran out of time - but it doesn't matter because it measn we have a good excuse to return to Eskişehir another time. :) We'll be writing about Kent Park soon. Loved it. :)

Hey thanks for the post it was nice to read and def. absorbed my attention.Have you had a chance to see KentPark, Sazova, Haller, Glass museum and the first Car of Turkey ( Devrim )during your visit in Eskisehir. If yes i'd love to read your reviews about all.

@ Jack Scott: Well the camera didn't really make it look colourful so I put extra boost on the photos - a bit of fun. :)

@ Zerrin: Well we'll see you next time in Eskişehir. We think more important things were happening for you. ;)

Love your photos and shots of these towns....so colourful.