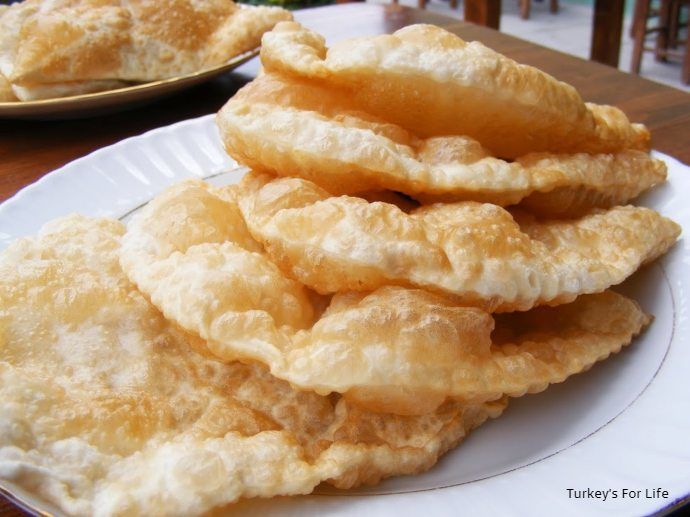 Before we set off on the first leg of this year’s Turkey travels, we asked people on our Facebook page if there was any special food we shouldn’t miss while we were in Eskişehir.

For us, visiting a new place is as much about the food as it is the scenery.

In Izmir, we loved the Turkish street food such as sögüş and nohutlu pilav and the Turkish Coffee. So we knew there must be something we could test our taste buds with in Ekişehir.

Of course, the first thought that sprung from that was, why has Eskişehir got Tatar food?

A bit of research told us the Tatar people are originally from the Crimea. And, according to the International Committee For Crimea, for various reasons, many have migrated southwards to Turkey over the centuries since the 1700s.

Çibörek At The Kırım Tatar Culture House In Eskişehir

So, as we were wandering around Eskişehir’s Ottoman houses in the old city of Odunpazarı, we happened upon the Kırım Tatar Kültür Evi (Kırım Tatar Culture House)…and they were advertising their homemade çibörek.

Odunpazarı is arguably Eskişehir’s prime tourist centre, especially for domestic tourists, so we may well have paid way over the odds for our special börek.

But why not enjoy a bit of indulgence from time to time?

Çibörek is a Tatar dish, we were face to face with a Tatar Culture House; what else were we going to do?

It would have been such a waste not to take advantage of our situation.

We’d never seen çibörek before so we sat down and confidently ordered iki tane (two of), expecting two çibörek to appear…

And then we wondered what we’d let ourselves in for when the guy who served us walked off shouting ‘iki porsyon’ (two portions) to the lady who was cooking inside.

Ayran and Antep Ezmesi were delivered. And then a few minutes later, our iki porsyon of çibörek appeared.

And let us just say right now: if you’re in Eskişehir’s Odunpazarı at the Kırım Tatar Culture House and you’re not that hungry (we’d only finished breakfast a couple of hours before), and you’re only trying çibörek out of curiosity, one portion between the two of you is enough!

One portion of çibörek is five individual börek – we took our time ploughing through these, we can tell you.

We didn’t want the people thinking we didn’t like their food.

And there were other customers there who didn’t seem too perplexed by the size of the their lunch – guess they already knew better than we did.

Afterwards, photos we saw in other börek places advertising their çibörek also showed an image of a plate with five pieces.

The people of Eskişehir have no shortage of börek establishments to choose from, so photos of çibörek portions were plentiful.

Neither of us fell in love with it but that doesn’t mean it isn’t good.

Both the meat and the pastry were so light – apparently, getting the pastry like this is a special skill. – but it’s just so hard to top many of the fantastic foods we’ve eaten in Turkey over the years.

Çibörek is a thin layer of boiled, flattened minced meat (tastier than it sounds) encased in a lightly fried, thin casing of yufka (a slightly thicker type of phyllo pastry) and, aside from the serving of Antep Ezmesi, that’s about it.

Have you ever tried çibörek? Is it a thumbs up or a thumbs down from you?