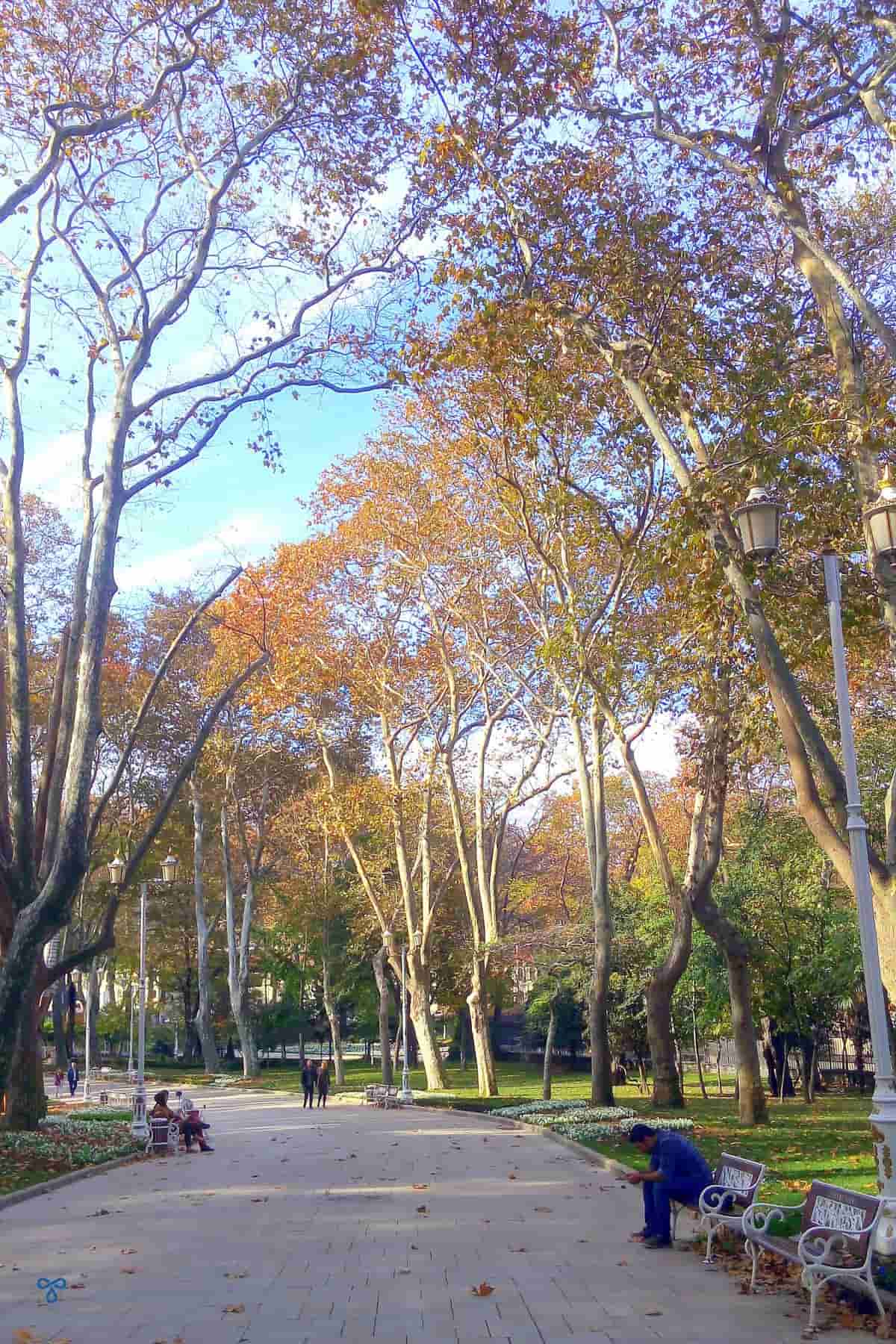 Okay, we’re having a mild autumn here in Fethiye, but it’s autumn all the same. And it was exactly the same feeling when we were in Istanbul recently for the Istanbul Marathon.

Obviously, it was cooler than the Fethiye temperatures but still warmer than we’ve known it previously (we always seem to end up in Istanbul in autumn and winter because of the marathon and my birthday).

But more pleasant temperatures meant it was so easy to do our favourite travel activity…just wandering without purpose.

Aimless wandering, taking in autumnal scenes in Istanbul. And here we are, slap bang in the middle of the tourist heart of Istanbul. It’s blissful. This is Gülhane Park, and it’s strange how your perceptions change over the years. Many moons ago, we walked through here on our first visit to Istanbul and wondered why anyone had even bothered mentioning it to us. What’s all the fuss, we thought!

The fuss is, it really is a little oasis of calm. People stroll here, they don’t push. There’s space, there are random sculptures, there are trees…lots of trees that are around 200 years old…and in autumn, well we all love an autumnal scene.

If you were just dropped off here, blindfolded, and not told where you were, you wouldn’t believe for one minute that Aya Sofya, Sultanahmet Camii (the Blue Mosque) and the Basilica Cistern are just a stone’s throw away. And that there are thousands of tourists and coaches and shops and bars and restaurants…this is autumn and this is Gülhane Park. That’s why people mentioned it to us; that we should come here. We can see that now. This is your beautiful breather.

To your left, as you head back towards the main sites, there’s a statue of Atatürk. He’s sat down and he’s got gold-coloured, smooth, shiny knees. That’s because the Turkish visitors to Gülhane Park sit on his knee to have their photo taken. There’s a family doing exactly that as we pass. And there are 50 or so school kids sitting on the grass with their teachers, tucking into packed lunches…a school trip. More kids are filing out of the museum opposite, teachers doing head counts.

Also to your left is Topkapı Palace, former home to the Ottomans; you know, those people who built up the Ottoman Empire and ruled over this area for centuries? Yes, those people. We’ve left Gülhane Park now and it’s immediately to our left, running adjacent to the boundary wall. That little archway straight ahead is the entrance to the former (not very) humble abode of the oh so famous Ottomans.

For now though, we’re just wandering without purpose, remember. We’re enjoying Istanbul’s autumn scenery. It’s a crisp, sunny day. Perfect. In years gone by, Gülhane Park was part of the grounds of Topkapı Palace, so the scenery is much the same. Steer away from the main path that leads straight through the palace gates and you’re still relatively crowd-free.

Aya Irini (Hagia Irene) is in these grounds too. A typical (and beautiful) example of Byzantine church architecture, not dissimilar to Kariye Museum, this was the first church built in what was then Constantinople, in the 4th century.

These days, Aya Irini is used for classical music concerts because of the fantastic acoustics. The interior looks just amazing on photos…but we’ll have to stick to photos for now because, on this quick break, we tried to visit here twice. “Sorry, closed,” was the reply. We’ll not be defeated, however. Oh no, we’ll be back…

Our little wander can’t take us too far because Barry ran the marathon the day before. It’s just a case of keeping the legs moving and enjoying the sunshine. We walk down the hill from Sultanahmet to Galata Bridge and look back to where we’ve just come from – the autumn trees of Gülhane Park and Topkapı Palace almost snuggled into the bronze foliage. The famous Istanbul ferries sit by their jetties on the Golden Horn…and today, Istanbul in autumn sunlight is a lovely place to be.