Maybe it was the fact the sun was shining, we’re not sure, but both of us said this year’s Istanbul Marathon was the most enjoyable yet. Sunday was the third time we’ve taken part, and there was a completely different atmosphere to usual; a bit of a culture change. More people taking part just for the fun of it. Yes, there were the serious runners – and good luck to them; full admiration from here – but so many people were there on Sunday just to be there and enjoy the day.

There was support along the roadside (this has never really happened much in our past runs) in the form of music but also people clapping and the security teams shouting encouragement: “Koş, koş, az kaldı.” (Roughly translated as, “Keep going, you’re nearly finished.”) Some people were in fancy dress, others had full sports gear on, more people were taking part to raise money for charity or raise awareness for causes than we’ve seen before. It was just a privilege to be a part of and let’s show you why…

En route to the start from Sultanahmet

7 am: We leave our hotel in Sultanahmet to make our way to the meeting point for the shuttle buses to take us to the start line. Bonus number 1 is the opportunity to take a photograph of Sultanahmet Camii (the Blue Mosque) illuminated in early morning sun without thousands of tourists crammed outside.

There’s a bit of a crush for the buses but everyone’s in good spirits so we don’t care. We’re all going to the same place for the same reason. As soon as a bus pulls alongside us, happy days as the doors stop right by us and me and Barry manage to dive on and get a seat. Within seconds, the bus is overfull, the doors are closed and we’re on our way…and I realise I’ve not put the memory card in my camera. Tiny pics from now on! Look upon this post as the recording of a day in motion rather than a decent quality picture show. 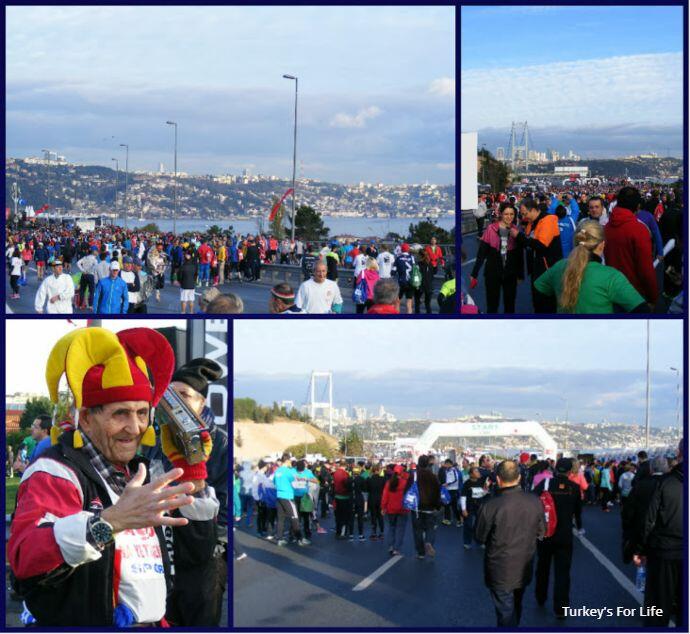 Waiting at the start line

The start line for the marathon (Barry’s run of choice) is always down just before the entrance to the Bosphorus Bridge, while the shorter run (my run of choice), the 10 km, is further back up the hill. So we split up after we get off the buses and I trudge to my start line. You can see the bridge in the distance and it’s a first good goal to go for…because it’s downhill – and hey, because it’s the Bosphorus Bridge! 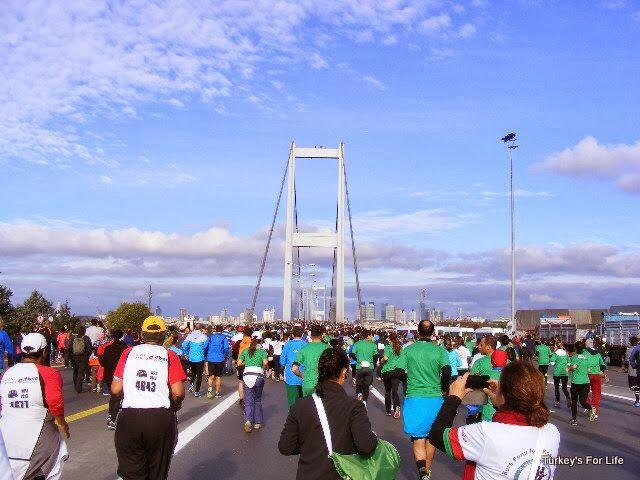 And we’re off, heading towards the bridge

The marathon and 15 km runners leave first, and, finally, it’s the turn of the 10km runners. Everyone sets off, waving hands in the air, laughing and whooping. I know many of them have set off too fast but we’ll get to that in moment. For now, the holy grail of this run is to run / walk across the world famous Bosphorus Bridge. This is the only day of the year it’s open to pedestrians…and the views – well, this is Istanbul! 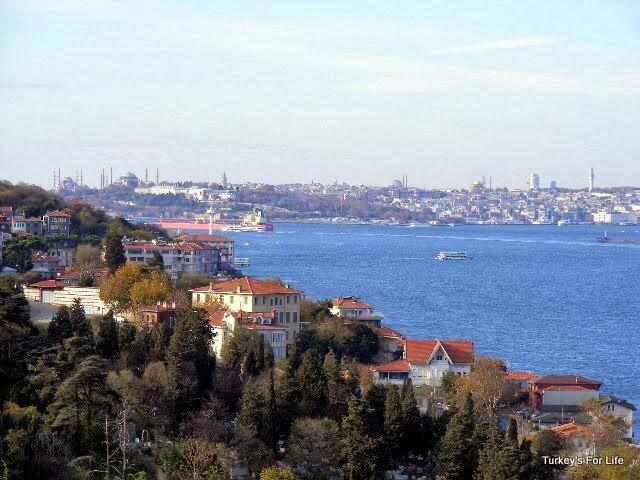 Your first glimpse of the Bosphorus as you cross the bridge

We’re running over the Bosphorus Strait with views back towards Sultanahmet, Aya Sofya and the Blue Mosque. Mansions line the Asian side of the shore, ships, tankers and tour boats pass beneath us. 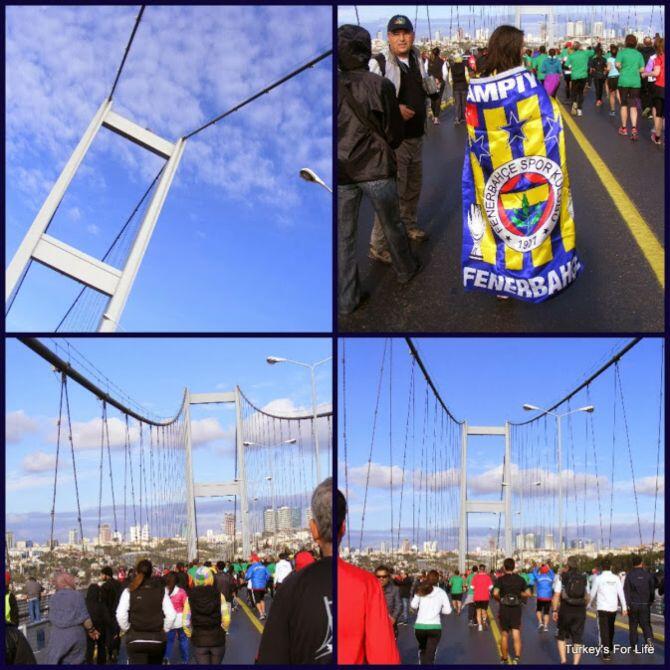 Some people just like to walk and enjoy the scenery

And once we’re on the bridge, well there’s not a lot of running going on. People are stopping to take photos of the views, of their fellow runners with views in the background; tea and coffee sellers weave between us all, plying their trade. Simit sellers, too.

Yes, the sunshine definitely helped. Everyone’s happy and, rather than ignoring the traders, business is brisk for them. Everyone’s here to enjoy the event. No one looks too concerned about getting a personal best time today. 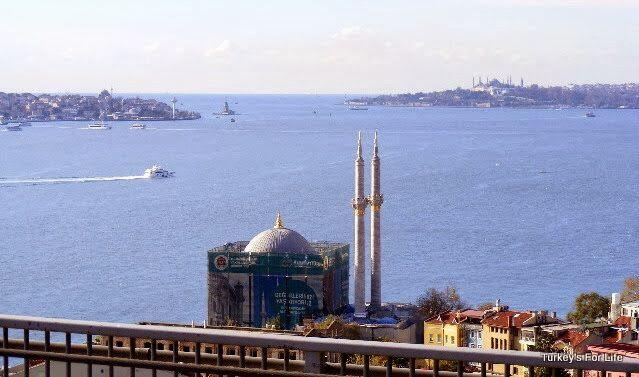 Over from Asia into Europe

As we exit the bridge, there’s a view of the scaffolded Ortaköy Mosque (the restoration must be almost complete by now) and the shops and stalls which sell the famous kumpir.

And then we all fork to the right along the filter road that will take us towards Beşiktaş. And those who did set off in an excited run suddenly start walking. “No one mentioned this hill,” say various English language voices. And it is a hill. It’s a gradual climb that seems endless.

Looking back towards the bridge from the long climb

And it is tough – but on Sunday, I didn’t mind, it was a sunny day and I knew to expect it. We’ve forked to the right and curved all the way round to the left so that eventually, we get views of the Bosphorus Bridge, where we’ve just come from; a little reward for climbing efforts.

Everyone’s trudging up the hill. No one’s running. I’m loving the march uphill…because I know there’s an end to this and I know what’s over the other side. 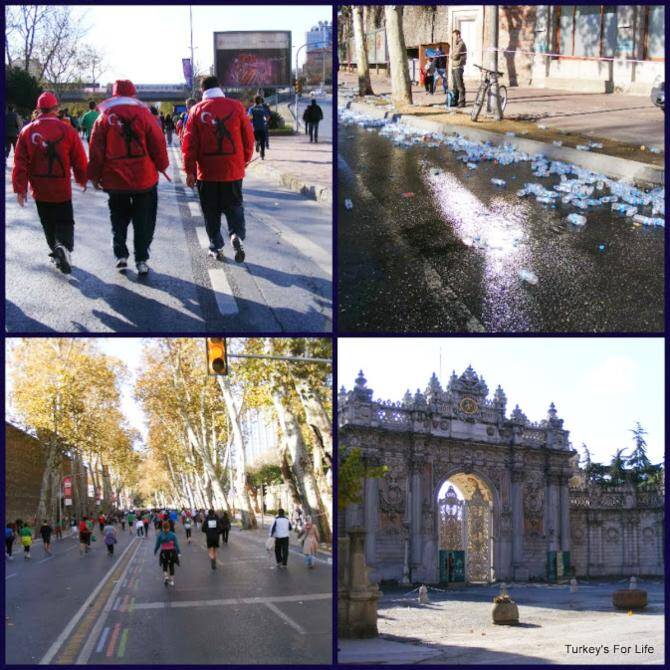 Eventually, you’ve got to reach the top. We’re pretty high up now and the 10km finish is at sea level, on the shores of the Golden Horn. Which means it’s now downhill time. And it’s a steep descent where, once again, everyone finds the energy to put a spurt on.

Music blasts from speaker systems, people are cheering everyone on; this is where the security teams are shouting ‘az kaldı’ (nearly there) and the climb is already a distant memory.

All of a sudden no one is tired and weary and life’s good again!

We take a right onto the flat and grab water at the water station. And then it’s onwards, along the flat, passing the grand, ornate gates of Dolmabahçe Palace.

If you know Istanbul, you’ll know it’s overcrowded and the traffic is horrendous. Marathon day is the only day where you get the roads to yourself and all is relatively quiet. Today, this part of the city is yours. It’s a good feeling! 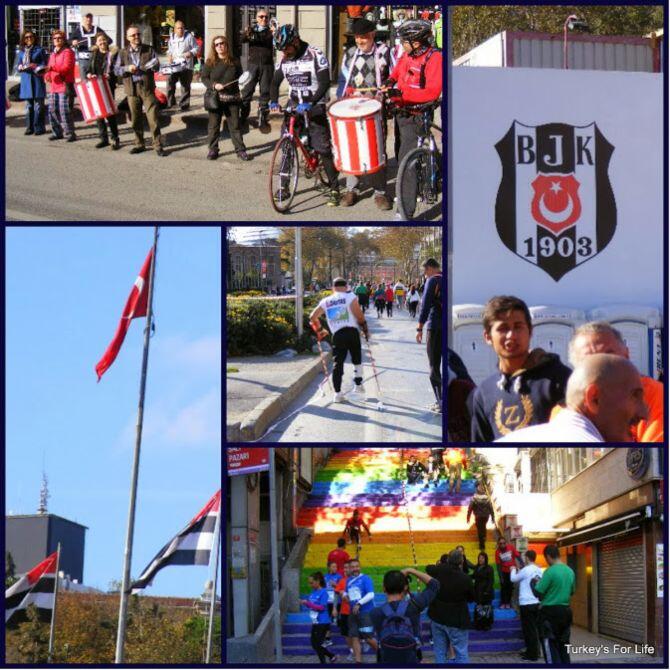 Just after Dolmabahçe Palace we pass a flight of Turkey’s now-famous rainbow-coloured steps. Again, 15k and 10k runners stop off to take photos and to have their photo taken on the steps.

If today was about running for a time, they’ve forgotten. Drummers encourage everyone along this stretch and, soon after, we reach what was previously Beşiktaş football team’s Inönü Stadium.

We’d seen this the day before from the road above and it was sharp-intake-of-breath-time again as we suddenly realised what the humongous gaping hole below us had been. Supporters of any type of team that has had a home for so many years will empathise with that. A shiny new stadium is on its way…

And the guy in the centre of the photo? He trains along the running track on Fethiye harbour and we see him quite often when we’re attempting to do our training. I spotted the Fethiye Belediyesi symbol on his t-shirt. We’ve done four runs in Turkey now and you see a lot of the same people. This guy’s one of them. 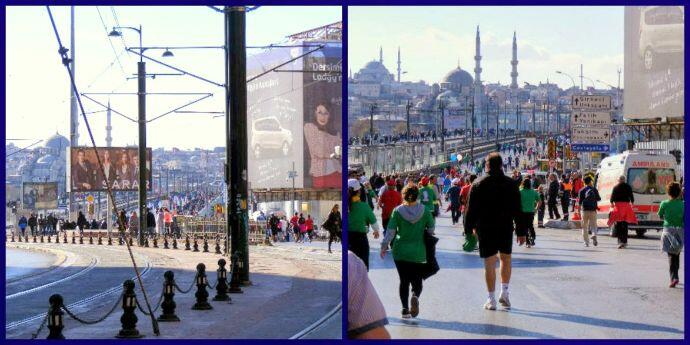 The very welcome sight of the Galata Bridge

Ohhhh, and look at this. We’ve run over the Bosphorus Bridge, had a (seemingly) never-ending climb, enjoyed a trot downhill, run along the flat by Dolmabahçe Palace…and all of sudden…you round the bend…and there’s Galata Bridge.

Another burst of energy…You’ve done it! 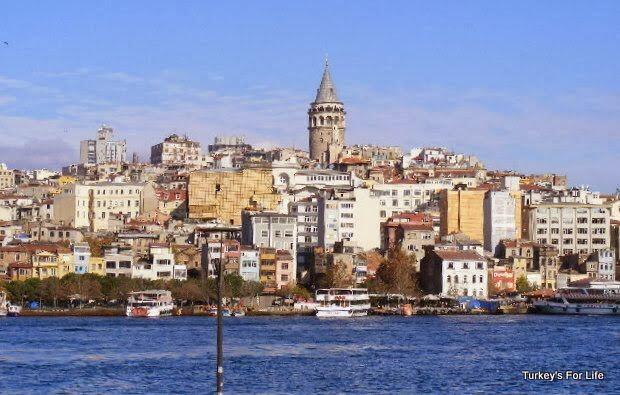 A rewarding view of the Galata Tower across the Golden Horn

…And we cross the bridge, take a right and (if you’re me and a few other people) stop for one more time to take an Istanbul-in-the-sunshine photo. Onwards to the finish line… 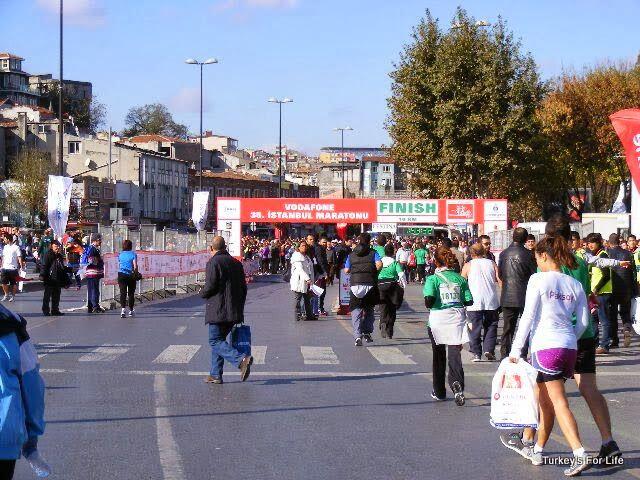 Everyone loves a finish line

A welcome sight! What follows is mellow pandemonium as we all crowd and crush and squash to pick up certificates and medals. Don’t expect signs guiding you in the right direction. Just follow someone with a number on their chest in the hope they know where they’re going.

Better still, if you see someone with a carrier bag (girl in purple shorts in this photo) already with their goodies inside, ask them where they got their bag from.

Pick up your well-deserved treats and then walk back up to Sultanahmet to your hotel to take an ever more well-deserved shower. And then, if like me, you have a loved one or friends running in the marathon, go straight back out and make sure you’re there to cheer them back in.

They will have done 42 km, not 10. They’ll appreciate the support.

Well, Julia, I remember reading this post last year and I couldn't stop smiling all the way through...this year, I will be joining this fun, finally! I am doing the 10km run, but am not a serious runner, the only reason I am doing it is to have that smile again on my face, cross the Bosphorus Bridge, run by Ortakoy, down Barbarosa, and get to Galata Bridge...hopefully the weather will be the same as last year! Thank you

Thanks for the lovely comment and so glad you were tempted to do it Svetlana. I'm not a serious runner either - I 'power walked' to take photos. ;) It's really good fun in all weathers but I hope you get a beautiful sunny day!! Good luck. :)

Hi Julia, I have question - a totally important one :) Did you meet any people running the FunRun in opposite direction, from Europe to Asian shore? Is it allowed? I am going set for an adventure walking from central Europe to India - across Istanbul. And this could be the only possibility to walk between the strait. Any info will be helpful :) Enyoy the day :) Dusan

Sorry to take so long replying Dusan. It's possible to walk on the bridge during the run - this is the only time the bridge is open to pedestrians so you could maybe get a photo there. I think they open the roads again 5 hours after the start of the races. Once on the Asian side, it's ring roads but you should be able to navigate to the centres again. :)

Good luck with what you are doing - what an adventure! If you miss that day, then your only option would be ferry, metro or taxi.

Well done both of you - a great cause. I love the idea of contestants stopping to take photos - does this happen in any other marathons?

Thanks a lot. I think the marathon runners were a bit more serious than us 10k strollers. ;)

I am going to have to do one of two things: buy a ticket to Turkey or stop reading all your post. This really made me "homesick". One of my favorite activities when I lived in Istanbul was walking around Sultan Ahmet Camii! Great pics!

Aww, do you think you'll be able to get back to Istanbul and Turkey soon, April?

fabulous post! So good to see Istanbul hosting this great marathon and it is getting stronger and huge well done to you guys! loved the photos:) Ozlem x

Yeah, there were definitely more runners this year, Özlem. :)